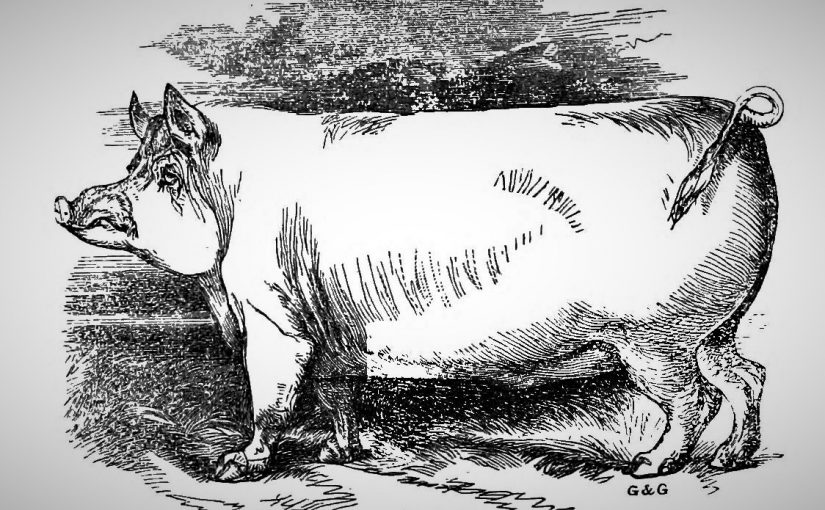 I haven’t had much time for blogging recently, since I’ve been working hard on a book which will be published later this year. It’s a true-crime thriller about a murder case in nineteenth-century Dublin, which has entailed weeks spent sifting through Irish newspaper archives. I recently stumbled across one medical story in the course of that research which was too good to waste.

This fascinating and highly unusual case was reported in the Dublin Evening Herald in 1897 – and subsequently in a number of other newspapers. It seems that it was never published in a medical journal, presumably because it was not, ultimately, a success. Newspaper reports are often unreliable sources for this sort of story, but there are good reasons for thinking that the outlines, at least, of this one are broadly true: 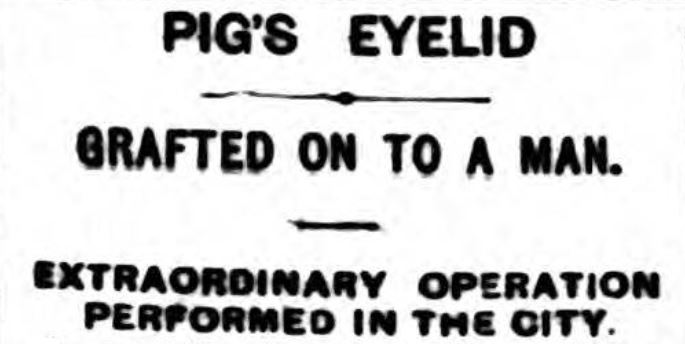 A surgical operation of extraordinary character was performed yesterday morning in Dublin. It was not carried out in a hospital, but in the yard of one of the leading city bacon factories.

Bacon-slicing machinery is notorious as a frequent cause of accidental amputations, but somehow I doubt that much elective surgery has taken place in a bacon factory.

The operation in question, which consisted in stitching a pig’s eyelid on to a man, has been performed once or twice in Germany, but this the first occasion on which it was ever carried out in the United Kingdom.

This sounds unlikely, but is quite plausible. From the 1870s there was considerable interest in the possibility of skin grafting using tissue taken from other animals. There are numerous case reports in which surgeons document transplanting skin taken from rabbits, dogs, cats and guinea pigs in order to repair significant wounds. Pig skin was also used, although I have been unable to find any reference to German surgeons using it to reconstruct an eyelid.

The subject of the operation, John Ryan, is an elderly man, from Clonmel, County Tipperary. Ryan was for nine years in the army, and served in India. His eyelids became diseased, and he lost the sight of his right eye. The diseased portion of the left eyelid was cut away, and the irritation of the eye being somewhat relieved, the sight was preserved. Ryan was then discharged from the army without pension. This was in 1872. Since then the partly-cut lid has been curling in on the eye, producing irritation, and impairing the sight to such an extent that at length it became evident the man would be afflicted with total blindness unless the irritation were speedily relieved.

A progression that would have been all too familiar to doctors practising in the pre-antibiotic era.

Some time ago Ryan came to Dublin and entered the National Eye and Ear Infirmary, Molesworth Street, where he was placed under the care of Dr Maxwell. Having carefully considered the case, Dr Maxwell came to the conclusion that the only chance of saving the sight of the eye was to stitch on to the eyelid, in place of the portion cut away twenty-five years ago, a corresponding portion of a pig’s eyelid.

Arguably Ireland’s most distinguished ophthalmic surgeon of the period, Dr John Patrick Maxwell was well known throughout Europe. He excelled in the surgical correction of strabismus (squint) and plastic surgery of the eyelids – and operations of both types were named after him. There was nobody better qualified to treat the unfortunate John Ryan.

But why use tissue from a pig? Dr Maxwell had concluded, probably correctly, that only surgery could save his patient’s sight. One eye had already been destroyed by infection, and if left unprotected the other would surely follow. This was a situation in which the surgeon decided that an experimental procedure was better than doing nothing at all – and xenotransplantation, the use of grafts from non-human animals, seemed the most promising field of research at the time. His decision was risky, but from a contemporary perspective can be seen to be rational.

In order that the operation should be success, it was necessary that the pig’s eyelid should be taken from an animal just killed, so that the flesh of the pig, being put on before the blood had time to clot, would knit with and become part of the flesh of the patient. It was therefore decided that the operation should take place in a bacon-curing factory, where pig-killing is carried on an extensive scale.

It does seem rather odd that it did not occur to anybody to take the pig to the hospital rather than the patient to the pig – although I doubt many operating room managers would be thrilled to see a pig being slaughtered in their nice clean OR.

The factory of Messrs Patrick Kehoe, 31 Garden Lane, off Francis Street, was selected for the purpose.

A famous Dublin producer of bacon, founded in 1821. An odd historical aside: in the 1960s the firm was owned by Albert Reynolds, later the Taoiseach (prime minister) of Ireland.

The principal of the firm, Mr MK Roche, gladly put the place at the disposal of the doctors, and Mr Thomas Romyne, manager of the concern, made the necessary preparations. The firm kill about three hundred pigs every morning, the animals being slaughtered, scalded, cleaned and cut up at the rate of forty-five every hour, or one every eighty seconds.

An efficiency – if not a mortality rate – that many surgeons would be proud of.

Ryan, accompanied by Maxwell, Mooney, and Dr Large, a Canadian gentleman at present staying in Dublin, arrived in the factory shortly after eleven o’clock, and proceeded to part of the yard shut off with tarpaulin, where Dr Keys was already in waiting.

I wish I knew who the Canadian Dr Large was, but I have been unable to identify him. Dr Mooney was Herbert Charles Mooney, then a young man but soon to become another leading light in Irish ophthalmic surgery.

It is worth noting, by the way, that this operation took place outdoors, in an improvised operating theatre. The tarpaulin walls enclosed this area on all four sides, but the top was left open to maximise the available light.

Ryan was put on his back on a table, and his eye having been carefully washed with antiseptic solution, Dr Maxwell took a small lancet in his hand and carefully slit the remaining portion of the top eyelid. No chloroform was administered, but one doctor kept pouring cocaine into the eye, while another staunched the blood.

Cocaine, which had only recently entered the surgical armoury, is a highly effective local anaesthetic, so it is possible that the patient did not experience very much discomfort.

Meanwhile the pig-killing was proceeding an adjoining hall, and when the slit, which had to be made very carefully, was almost completed to the satisfaction of Dr Maxwell, Dr Mooney stepped into the hall where the pig-killing was going on, and returned in a few minutes with the eyelid which he had cut from a pig that had been killed less than half a minute previously. This was washed in antiseptic solution and fitted into the slit already referred to.

The details are rather vague – it is a shame that the procedure was not recorded by the surgeon himself. Dr Maxwell was a highly skilled plastic surgeon, and it is evident that this operation would have been performed with great precision.

The careful use of antiseptics is notable – particularly important, given their surroundings.

If, as is expected would be the case, the pig’s flesh knits with that of Ryan, the effect will be that the portion of the eyelid which has been turning in on the eye and causing irritation will be pushed in an outward direction by the new eyelid, with the result that the irritation will cease, and the sight will be preserved. It will not be known definitely for some days whether the operation has been attended with complete success.

Unfortunately, it was destined to inevitable failure. Under ordinary circumstances, transplants from pig to human are impossible owing to the immunological barrier: porcine tissue is quickly recognised as alien and destroyed by the human immune system. I can find no trace of this case after the initial news reports – nothing in the medical journals, and no further newspaper articles – but it was inevitable that this procedure would fail. Thanks to developments in genetics and immunological therapy, such a procedure may one day be possible, but it certainly was not in 1897. In all likelihood the tissue graft became necrotic and then fell off, probably within a few days.

That said, there was a celebrated case reported in 1890 in which a French surgeon, Dr Gillet de Grandmont, reconstructed a boy’s eyelid using skin taken from the stomach of a frog. The surgeon claimed this operation as a complete success, with months of follow-up. How is this possible? I’d be interested to hear from any experts who have a view (please do leave a comment below!) But I suspect that any cellular material in the frog skin quickly broke down, leaving the intercellular matrix – the structure between the cells – to act as a bioscaffold on which the patient’s body laid down new tissue. Intercellular matrix is largely devoid of genetic material, which means that it is ignored by the immune system – a fact that can now be exploited to manufacture heart valves, and even blood vessels, from living tissue.

Sadly we don’t know what happened to the patient in this Dublin case, but there is a nice postscript about two of the surgeons, since Dr Maxwell and Dr Mooney both founded ophthalmic dynasties. Herbert Mooney and his son Alan both served as President of the Irish Ophthalmological Society; there was at least one Mooney on the staff of the Royal Victoria Eye and Ear Hospital, spanning three generations, for the entire twentieth century.

As for Patrick Maxwell, his daughter Euphan was one of the first female medics – and the very first woman to become an ophthalmic surgeon – in Ireland. She served in the Royal Medical Corps in Malta during the First World War, returning to Dublin to pursue a career in eye surgery which saw her elected as President of the IOS in 1941. I was also amused to discover that her mother (Patrick Maxwell’s wife) was born Elizabeth Suckling, a curiously apt name for an article about pigs.

I’d be fascinated to know any more about this operation, or others like it – if you have any further information about pig-human grafting of eyelid tissue please do leave a comment!

Update: There’s one important point I should have made. The notion of pig-to-human transplantation is far from absurd. The pig has long been a favoured animal for surgical research, because its major organs are very similar in size and structure to our own. Pig heart valves have been used as replacements for human tissue for half a century, and since the mid-1980s specialists have been using porcine skin grafts to treat patients with severe burns. A long-term goal of transplantation researchers has been to breed a genetically modified pig to enable porcine organs to be transplanted into humans without any risk of rejection. Enthusiasts claim that the era of the pig-to-human heart transplant is only a few years away; but not everybody shares their optimism.  The great heart surgeon Norman Shumway used to say that ‘Xenotransplantation is the future – and always will be!’

One thought on “The bacon factory eyelid transplant”