At the age of 14, George Ryerson Fowler ran away from his parents’ home in Jamaica and stowed away on a ship to New York. The Civil War had just begun, and Fowler dreamed of joining the Union army as a drummer boy; but after a sleepless night in the rat-infested basement of a derelict house in Manhattan he seems to have thought better of this plan, deciding that a life of Caribbean comfort was not so bad after all. 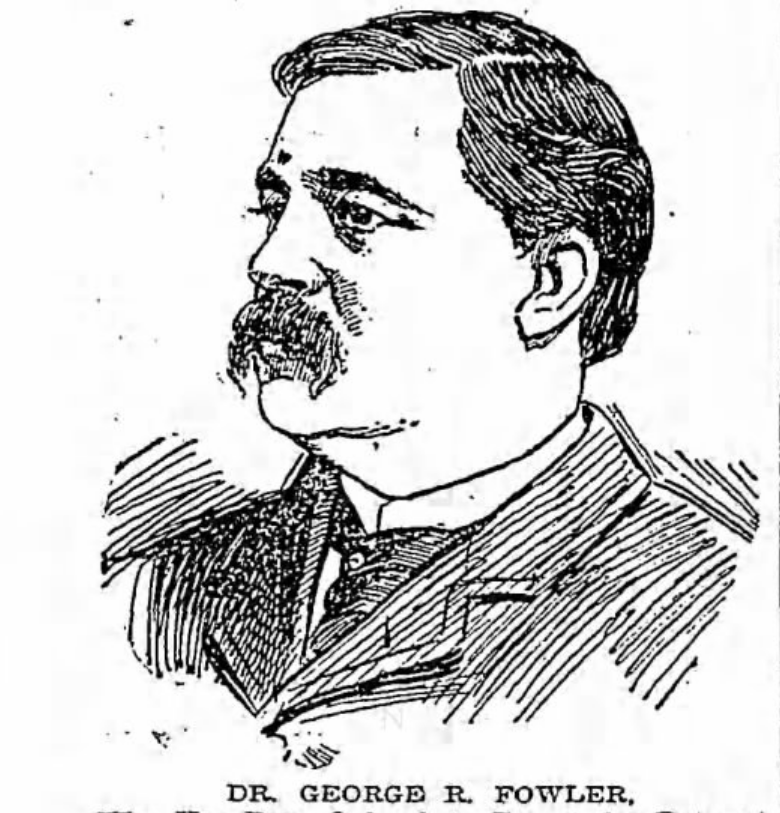 Fowler began his career as a telegraphist, but studied medicine and then surgery before establishing a private practice in Brooklyn. He never lost his interest in telecommunications, and long before the advent of the telephone set up a private telegraphic network linking together local pharmacies, hospitals and doctors’ surgeries – perhaps the earliest electronic emergency service anywhere in the world. Fowler became one of the leading surgeons in New York, an authority on abdominal surgery and, in particular, the operation of appendectomy. He also introduced to America the idea of training the public in first aid, after observing a similar scheme during his travels in Europe.

An interesting person, then; and this case, which was published in the Brooklyn Medical Journal, was one of the most interesting that Dr Fowler ever witnessed.

On February 2nd 1888, Dr Fowler gave a presentation at a meeting of the Brooklyn Surgical Society. He was accompanied on stage by a young man who gave every appearance of being in perfect health. Dr Fowler introduced him as a former patient, and then told a story that left much of his audience speechless with admiration:

This man, aged. 30, entered St. Mary’s Hospital on the 13th of May, with a gun-shot wound of the head. The pistol was fired at short range, the muzzle almost touching his forehead. The first bullet entered the frontal bone a little to the left of the median line; the second entered at the inner canthus of the right eye, tearing away the lower and posterior portion of the frontal sinus of that side.

In plain language, the first bullet had passed through the man’s forehead, the second through the bridge of his nose. The patient was unconscious when he arrived at the hospital. The surgeons wasted no time.

After making a crucial [cross-shaped] incision and laying bare the bone, it was found that a compound fracture of the frontal bone had been sustained, the bullet having passed directly downward, perforating the dura and being lost in the cerebrum. The bullet was from a 32-calibre revolver and the opening in the dura was about the size of my little finger. Some portion of the frontal bone which was driven into the brain was removed with the forceps and was found to be stained with the lead of the bullet.

So the first bullet, after making a mess of the front of the skull, had disappeared into the brain matter, never to be seen again. That was bad enough; but if anything, the second had caused even more damage.

It was difficult to trace the course of the second bullet, but the posterior wall of the right frontal sinus was entirely destroyed and portions of that were also taken out from the cerebrum; a portion of brain matter escaped — the portion of the frontal lobe resting on the roof of the orbit of this side was destroyed — there was a considerable laceration of the brain at this point.

After removing the debris I tried to locate the balls by drawing an imaginary line across as nearly as possible in a line with the pistol and trephining posteriorally at a point where that line would meet.

The surgeon’s idea was simple: work out the likely path of the bullet, and cut a hole in the back of the skull in the hope of extracting it from that side. The next stage of the procedure was hazardous, to say the least.

After trephining the occipital bone a slender needle was passed into the brain substance, making the needle pass systematically in lines radiating from this latter opening as a central point to all portions of the brain, as nearly as could be reached, but no trace of the bullet could be discovered, the openings were then closed.

In the days before MRI scans made it possible to locate brain tumours precisely before an incision was made, surgeons were sometimes forced to probe blindly for them in a similar manner. But the idea of poking around in the forlorn hope of finding a lost bullet is one that would probably give a modern neurosurgeon sleepless nights. The risk of causing unnecessary harm – or even death – to the patient would have been considerable.

After the completion of this fraught procedure, Dr Fowler repaired the wound at the front of the man’s skull. He irrigated and thoroughly disinfected the nasal cavities with mercury iodide, before packing them with iodoform cotton – an antiseptic dressing.

The patient’s after history was entirely uneventful; he never even complained of a headache.

He was up and about, assisting in the wards of the hospital as a ward orderly, in three weeks, and left the hospital on the 7th of June, fully healed and in possession of all his faculties. There is a little difference between the pupils of the two sides, the left being comparatively larger than the right; this is the only indication of any disturbance, if, indeed, this is due to the injury.

A couple of months later the patient returned, having noticed some discharge from the site of the upper wound.

Upon exploration we found necrosed bone, which could be discovered from both openings. The parts were reopened, a small portion of the bone was removed from the lower opening, and it was thought that that would end the trouble. But it did not, and about four weeks afterwards he again appeared with the upper opening still discharging pus.

Once again the surgeon explored the wound and found a bone fragment three-eighths of an inch long.

It was removed, catgut drains were placed in position and the patient made a rapid and complete recovery. He suffers from nothing except perhaps a little mental depression which may or may not be the result of the original injury. Dr. Arthur Mathewson examined him and stated that the difference in the pupils was probably a congenital defect and had nothing to do with the injury. Both bullets are still somewhere in the brain.

There is no doubt that this patient was exceptionally lucky. A single bullet through the forehead would be, in the majority of cases, quickly fatal. But for two to have hit the target, without producing any significant effects, is really extraordinary. It seems that much of the damage was to the right frontal lobe of his brain, which is (generally speaking) associated with non-verbal abilities such as creativity, imagination and response to one’s environment. Traditional IQ tests may reveal no intellectual deficit after even quite severe frontal lobe injuries – but it is possible that a clinician today might spot subtle signs of impairment that were not apparent to a doctor in the 1880s.

If you have any thoughts on this story please do feel free to leave a comment below.