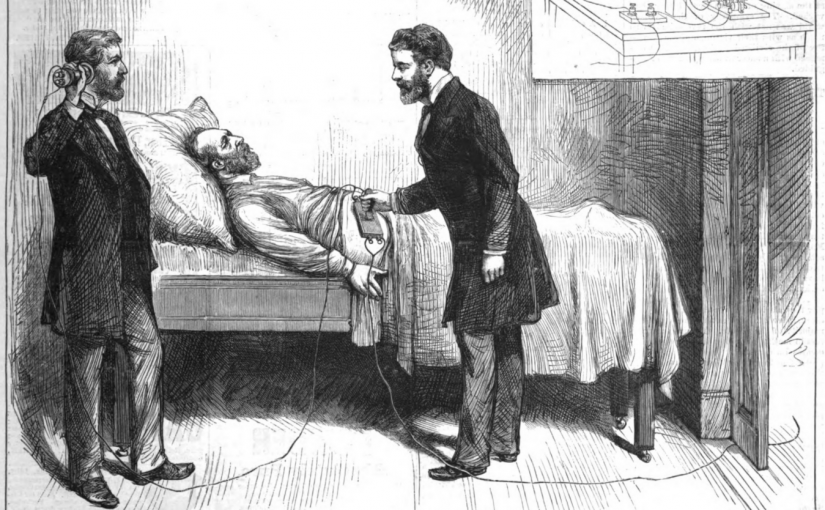 In my last post I wrote about an impressive operation performed in 1888 by the American surgeon George Ryerson Fowler, who successfully removed two bullets from a patient’s brain. Shortly after publishing that story I came across another of Fowler’s cases which, although not well known, deserves a place in the history books. It represented a significant milestone in surgical technique, and employed two technologies then at the cutting edge of medical science. This report was published in the Brooklyn Medical Journal in 1896:

You’re probably wondering what a ‘telephonic probe’ is – sounds faintly sinister, doesn’t it? – so before we delve into the details of the case, let’s have a brief historical digression:

On July 2 1881 the American President James Garfield was shot in the back by an assassin at point-blank range while waiting for a train. Though his doctors feared he would not survive the night, he lived for another two months before eventually succumbing to an infection on 19 September. During the long weeks when he lay, gravely ill, in his bed in the White House, several attempts were made to localise and remove the bullet – but the President’s doctors could not agree on where it was. With X-ray imaging yet to be invented, they had no reliable means of locating it.

Enter Alexander Graham Bell. The inventor of the telephone lived in Washington D.C. and, thanks to incessant newspaper coverage, was well aware of the difficulties faced by the President’s surgeons. Bell realised that he might be able to help. He quickly put together a basic metal detector, a compact device employing components he had developed while working on the telephone. It used a pair of induction coils connected to a telephone earpiece; when the coils were brought close to a metallic object, a current was induced in the coils and would cause a sharp click in the earpiece.

Bell took his device to the White House, where President Garfield’s doctors permitted him to enter their patient’s sickroom. The scene was described – fancifully, as it turns out – by a correspondent for Harper’s Weekly:

The patient was bolstered up in bed, and he watched the proceedings with mute interest. His physicians stood around. Professor Bell stood with his back toward the President, holding the telephone to his ear, while Mr. Tainton, Professor Bell’s assistant, moved the coils over that portion of the abdomen where the leaden ball was thought to be imbedded. When the sensitive centre of the instrument was immediately over the black and blue spot that appeared shortly after the President was wounded, Professor Bell said, “Stop! There it is.”

A nice story, but apocryphal. Bell did indeed try, but the experiment was a failure, either because the iron mattress springs interfered with his apparatus, or – as some historians believe – because the President’s physician would only allow him to pass his coil over one side of his patient’s body. Inaccurate it may have been, but the newspaper report did at least include the splendid illustration which you’ll find at the top of this story.

Although the invention did not help to save the President’s life, Alexander Graham Bell continued to improve it, in collaboration with John Harvey Girdner, one of the surgeons who attended Garfield in his final illness. In 1887 Girdner published several papers in the New York Medical Journal explaining the device and outlining a series of cases in which he had successfully used it to localise bullets and shrapnel fragments. The invention now had a name: the Telephonic Probe.

Let’s return to George Ryerson Fowler and his case from 1896. As I mentioned in my last blog post, Fowler was himself a pioneer of telecommunications. He had trained as a telegraphist in the 1860s and was fascinated by the technology. Unsurprisingly, he was an early adopter of the Telephonic Probe – and when this young patient came along he found the ideal opportunity to use it.

The patient, a male student, nineteen years of age, was admitted to the Methodist Episcopal Hospital on September 14, 1896, with the following history. Two days prior to admission he shot himself, with suicidal intent, in the right temple. He stated that he did not lose consciousness following the infliction of the injury, but immediately became totally blind. There was free bleeding from both nostrils, and subsequently some bloody expectoration. The weapon employed was a 32-calibre revolver.

When Dr Fowler examined his patient he found a bullet wound in the right temple, just below the level of the eyebrow. Both of the upper eyelids were swollen and discoloured, the eyes were bloodshot and the pupils dilated. The patient reported that he had a headache, and could not tell the difference between light and dark – fairly mild symptoms, in the circumstances. The surgeon had the wound cleaned and disinfected, and shaved the surrounding skin before applying a dressing. But one obvious problem still remained.

Although it was evident from the symptoms that the bullet had not penetrated the cavity of the cranium, but, on the contrary, had traversed both orbits, at my request Dr. Kolle of this city, on October 13, 1896, made the accompanying skiagraph with the view of assisting in definitely locating the missile to the end that, if found accessible, it might be removed and thus prevent future disturbances arising from its presence.

‘Skiagraph’ is an antiquated term for an X-ray. One of the really notable aspects of this story is the chronology. Wilhelm Roentgen had discovered the phenomenon of X-ray radiation less than a year earlier, on November 8 1895. On December 22 Roentgen took the first ever X-ray of human tissues (of his wife’s hand). The technique was applied to clinical medicine in early January, and first used in the operating theatre the following month. Seldom – if ever – has such a fundamental scientific discovery been translated so quickly into a useful clinical tool (though it would be some years before practitioners started to realise the grave risks posed by excessive exposure to X-ray radiation).

The exposure was forty-two minutes, and the tube employed was the Thompson-Crooke.

Forty-two minutes is a very long time for the brain to be exposed to X-rays – though of course the risk depends on the intensity as well as the duration.

The skiagraph was taken as nearly as possible in the line of the supposed flight of the bullet, and the skiagraph shows the missile lying apparently somewhat below the level of the left external angular process, and, judging from the clearness of its outline, according to Dr. Kolle, it was located not far from the surface.

This historic image was reproduced as part of the report – and, given that it was captured 125 years ago, it is remarkably easy to work out what one is looking at.

The X-ray gave Dr Fowler a very good idea of where to look for the bullet, although as it was a flat two-dimensional image it did not allow him to localise it precisely. On 17 October the patient was anaesthetised with ether and the surgeon made his search for the missing bullet.

The pointed telephonic probe, which was blunted so that it could not penetrate a vessel, and yet be sufficiently wedge-shaped to penetrate muscular and fascial structures, was passed through a small incision in the skin made as nearly as possible at a point opposite to the supposed location of the ball. A systematic exploration of the zygomatic and adjoining portion of the temporal fossa was then made in all available directions.

The zygomatic is the cheekbone, around the side and base of the eye socket. The temporal fossa is the side of the skull, around the temple.

The results of these excursions with the telephonic probe in the soft parts of the neighborhood were negative. The instrument was then introduced at the outer canthus, and the external and inferior aspects of the globe also explored, but with no result.

The outer canthus is the outer corner of the eye. The surgery now became more complex, as Dr Fowler decided to make an incision through the cheekbone and explore behind it.

The parts thus brought within reach were now submitted to a most searching investigation with the probe, but nothing was found.

Still nothing! So the surgeon decided to investigate the eye socket more thoroughly.

The margin of the outer wall of the orbit was now chiseled away until free access to that cavity was obtained, when the probe was made to explore all portions of the orbit outside of the globe. This extension of the exploratory operative procedure, however, was without result.

A lesser surgeon might have given up at this point. But Dr Fowler was not to be defeated.

If the results of the Röntgen-ray picture were not to be doubted, and the symptom of double blindness was not misleading, in the absence of all evidences of intracranial injury there was but one other place remaining to be subjected to investigation, and that was the globe itself.

By which he means the interior of the eyeball.

I therefore carefully introduced the telephonic probe through the sclerotic at the site of the gap left by chiseling away the orbital margin, when the presence of the bullet as it came into contact with the end of the probe was at once announced by the characteristic “click” in the telephone receiver.

What a moment! The ‘sclerotic’, now more usually known as the sclera, is the tough white outer layer of the eye.

A half-inch incision was then made through the sclerotic coat at the site of the puncture made by the probe, and the bullet, bearing marks of its passage through the bony parts, removed.

The surgeon then repaired the bone flap he had made earlier, and sutured the soft tissues above it. And that was it: job done.

Rapid healing followed, and the patient was discharged from the hospital at the end of a fortnight.

The report is tantalisingly short of detail at this point. It seems highly likely that the patient had permanently lost his sight, but Dr Fowler does not explain why both eyes were affected. Did the bullet pass through one eye before lodging in the other, or did it sever the optic nerve? Either way, the young man seems to have made a good recovery from an injury which might have been fatal.

This is believed to be the pioneer-case of location of a bullet in the head by means of the Röntgen-rays, in which an operation was undertaken and successfully carried out upon the basis of the findings of the X-ray picture.

And here, modestly buried in the last paragraph of the report, is the true significance of this operation. Later sources agree that this was indeed the first time in history that a foreign body was located in, and removed from, the human head with the help of X-rays. What makes it all the more intriguing is the indirect involvement of Alexander Graham Bell, inventor of the telephone.