It’s been a while! I haven’t managed to post on this blog in months, thanks to a work-in-progress, a true-crime book, which has been keeping me occupied for most of the last year. Now, however, I find myself in compulsory quarantine having just moved back to the UK from Canada, and with time on my hands. So here is a fantastic little case report from 1850, originally published in the Medico-Chirurgical Transactions. The author, Thomas Paget, was an eminent surgeon at the Leicester Infirmary, as his father had been before him. Thomas Jr was also one of the original 300 Fellows of the Royal College of Surgeons, and the first from outside London to serve on the Council of the RCS. He was well known for his expertise in eye surgery and – as in this case – for his skill in the removal of bladder stones.

John Conquest, iron founder, aged 40, has, for the last year or more, suffered from frequent and painful micturition, and on sounding I readily found a calculus.

The unfortunate patient found it painful to urinate. ‘Sounding’ was the procedure doctors used to detect a bladder stone or calculus. A metal probe was inserted through the urethra, and if the clinician felt it make contact with anything hard they knew there was an object there that might require surgical removal.

He also mentions, that upon attempting to make water, and during strong efforts at work, a portion of his urine is apt to escape at the navel which is open; and that, as far as he knows, this has been the case with him from birth.

An unusual party trick, but also a highly suggestive symptom. Urine escaping at the navel is typical of a condition known as ‘patent urachus’ – a rare developmental abnormality.

During the early part of pregnancy, a fetus voids its bladder contents via a canal known as the allantois, which communicates with the umbilical cord. Around the 12th week of gestation the allantois normally withers away into a fibrous structure known as the urachus. Very occasionally the channel remains open, allowing urine to escape the bladder via the navel. Patent urachus is usually detected in the first days or weeks after birth – it is rare for it to go unremarked into adulthood.

On August 15 1844 Mr Conquest was admitted to the Leicester Infirmary, where the surgeon discovered that this particular patent urachus was very large.

On subsequent examination I found that the nose of the catheter was easily made to appear from the bladder at the umbilical opening; and I hoped the stone, which seemed not a large one, might, without a painful operation, be extracted that way.

A nice idea – thus sparing the patient the danger and agony of lithotomy. Thomas Paget came up with an ingenious method of putting it into practice.

The most feasible project that occurred was the distension of the bladder to its utmost with warm water, the umbilical aperture being tightly plugged, and the patient reclined upon the table with his head lower than the pelvis, that upon removal of the plug the calculus might flush out with the water.

But then Mr Paget had an even simpler idea.

When, however, all was prepared, and the knife for lithotomy at hand, to be used in case of failure by other means, it occurred to me to try first a finger at the umbilicus. It readily entered, and when at full length down the unnatural passage, caught within the circle of the calculus sufficiently to enable me to drag it along the side of the bladder and extract it.

This was a rather unusual bladder stone, reminiscent of a Polo mint: 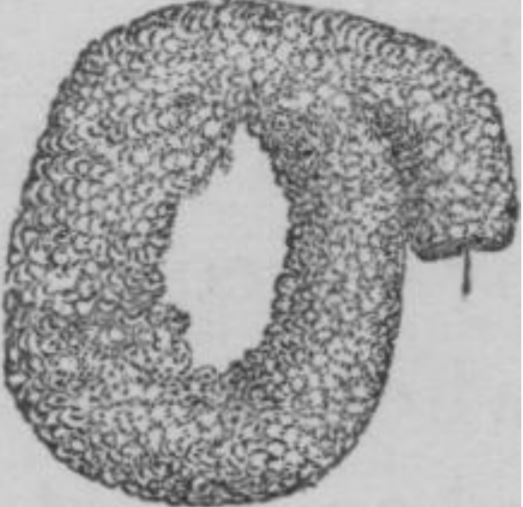 Its annular form of course led to a surmise as to what was the nucleus; and on carefully truncating it, the projecting extremity of the hair was seen. I imagine that the hair must have been one of the pubic hairs, which had found its way into the bladder through the umbilical opening.

I find this idea quite plausible, although if Mr Paget’s theory is correct this may be a unique occurrence in the history of urology.

After the extraction of the calculus, the man was entirely relieved of his bladder symptoms; and as in consultation with my colleague and friend Mr. Nedham, it was thought unadvisable to interfere with the congenital defect, the patient was in a few days discharged…and he wears a girdle with a thick pad of flannel to catch the jets of water which are apt to occur while he is at work.

An understandable clinical decision, and no doubt the correct one. It’s a shame the patient wasn’t entirely cured, but what a lucky man – removing a bladder stone was rarely so simple or painless.

4 thoughts on “An unusual route”