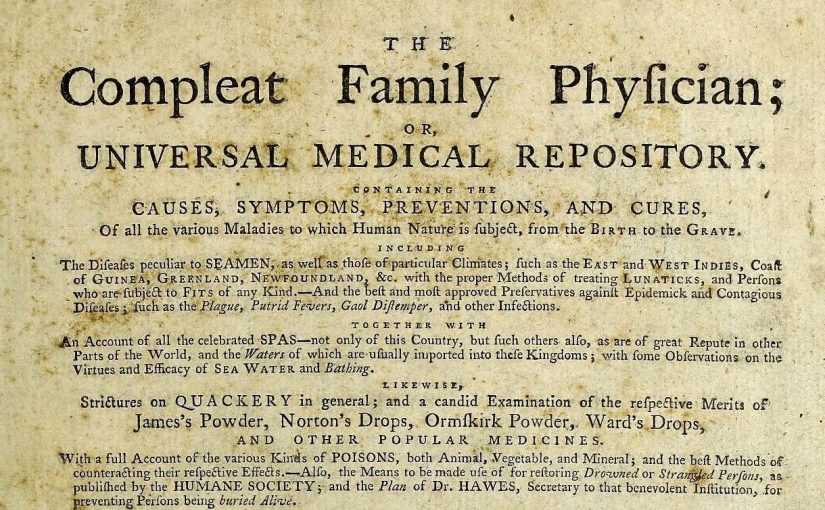 Eighteenth-century authors were fond of giving their books ridiculously long titles – often so lengthy that they weren’t titles at all, but rather pedantic descriptions of each volume’s contents. Today I came across the longest book title I think I’ve ever seen – and it’s a medical book, first published in 1781: Hugh Smythson’s Compleat Family Physician. (That’s only 0.7% of the full title, which runs to some 427 words – longer than some of my blog posts. See the bottom of the page for Smythson’s original in all its glory).

Unusually for the time, the Compleat Family Physician is aimed squarely at the layperson; Smythson wanted to help those who might not have easy access to medical assistance, particularly in parts of the country where summoning a surgeon or physician could take several hours. Many of the remedies he suggests are orthodox for the period (and therefore totally ineffective), but there’s also a great deal of sensible advice.  The chapter on treating lacerations (wash the wound carefully, bandage it in a clean dressing without any ointments or herbal preparations) is superior to many texts written decades later. He is dismissive of quacks and sceptical about patent medicines. He urges readers to take regular exercise, eat healthily, use medicine only when necessary and leave difficult or dangerous surgical procedures to the experts.

So popular was the Compleat Family Physician that it went through at least 22 editions in its first five years. My favourite section is an addendum made to one of these later editions:

Here’s the first of these ‘extraordinary cases’:

One Thomas Gobsill, a lean man, aged about twenty-six or twenty-seven years, being for three years extremely tortured with wind, was advised to swallow round white pebbles, which he did as often as the fit returned; and the stones passing easily through him, he thereby found great relief.

I’ve not encountered this strange treatment for wind before. I question the competence of Mr Gobsill’s doctor; on the other hand, he would probably point out that the remedy worked.

But, some months after, being seized with a violent fit, he swallowed, as usual, about nine stones; which not passing, he repeated the dose till he had taken above two hundred.

This seems a little bloody-minded. I think I might have stopped after twenty or – at a pinch – thirty.

These stones had been lodged in his body above two years and a half, when he first applied to a physician; and then he complained that his appetite was gone, that he could digest nothing, but threw up everything he eat. Upon examining his belly, the physician found the stones lay almost as low as the os pubis, or bone immediately over the private parts; and thrusting his fingers just above that bone, so that the lower part of the belly might lie on his hand, he could, with the motion of it, shake and make them rattle as if they had been in a bag.

Something makes me think that the physician was getting more amusement out of this case than was strictly ethical. The next development rather confirms this impression.

Upon this he caused a ladder to be set against a wall, and hung the patient up by the hams, with his head downwards. When he was in this posture, he said the stones were got up to his stomach; but being set down upon his feet, in a very short time the stones were plainly heard to drop down one after another.

The unfortunate man explained that they would move around even if he was not suspended upside-down by an sadistic doctor:

As he lay a-bed, the stones would sometimes get up, as the patient expressed it, almost to his heart, and give him great uneasiness; and at such times he was obliged to get up upon his knees, or stand upright, and then he could hear them drop; and he always reckoned above one hundred. He was so disabled by these stones, that he could not work but with pain; and then he felt the same at night, and next day a great soreness in the bottom of his belly, and voided large quantities of blood by stool.

He had visited several quacks, who had treated him by giving him emetics, laxatives or enemas. All without effect.

After some time, he told the physician that the pebble-stones grew more troublesome to him; that of late he had vomited up two of them, which were weighed, and one of them found to be two drams; and the other one dram, two scruples and a half.

These are quite small pebbles: two drams (more accurately, ‘drachms’ in the apothecaries’ system) is about 8 grams.

The patient complained that his strength was of late much decreased; that he voided great quantities of blood by stool, which kept him very weak. His appetite was also very much impaired, and his stomach would scarce retain anything. His hands were paralytic, always extremely cold, and his fingers contracted; so that he was not able to open them without help, nor could he keep them open unless it was by force. His legs were very likely in a short time to be as useless to him as his hands; for he said they began to fail him, and in the same manner to grow cold, and have little feeling in them.

This all sounds pretty unpleasant. But he also revealed a strange and worrying new symptom: the stones had apparently moved to a different part of the body.

Formerly at night, in bed, they used to get up, as hath been mentioned, to his heart; and upon turning to his knees, or standing upright upon his legs, they would drop one by one, so distinctly, that they might be counted; and in this state they always arose straight upon the right side of his breast: but now they rose obliquely, and got under his right arm, inclining towards the shoulder-blade; and when they were in this place, by giving him a blow with the fist on his right shoulder, they would all fall down in a lump together, and might very plainly be heard to clash on the other stones, which lay, as they did formerly, just above the os pubis.

It’s difficult to know exactly what had happened, and why the stones had moved; but here’s a tentative theory. The stomach is separated from the organs of the thorax by the diaphragm, a sheet of muscle whose contractions draw air into the lungs. In a condition called hiatus hernia, a tear in the muscle allows a portion of the stomach to protrude upwards into the thoracic cavity. Though rarely dangerous, it can be extremely uncomfortable and make eating difficult.

If this patient developed a hiatus hernia, a stomach distended by the presence of 200 stones might then pop through the hole at an oblique angle, creating the sensation he described. One can imagine that banging him on the shoulder might provide just enough force to make the pouch of stomach disappear through the hole and back into the abdomen. Please feel free to pick apart my pet theory in the comments!

I was hoping for some brilliant surgical intervention to save Mr Gobsill; but alas not. The article ends tersely:

He at last died suddenly.

* The full title of Smythson’s magnum opus is:

The compleat family physician: or, universal medical repository. Containing the Causes, Symptoms, Preventions, And Cures, Of all the various Maladies to which Human Nature is subject, from the Birth to the Grave. Including The Diseases peculiar to Seamen, as well as those of particular Climates; such as the East and West Indies, Coast of Guinea, Greenland, Newfoundland, &c. with the proper Methods of treating Lunaticks, and Persons who are subject to Fits of any Kind. – And the best and most approved Preservatives against Epidemick and Contagious Diseases; such as the Plague, Putrid Fevers, Gaol Distemper, and other Infections. Together with An Account of all the celebrated Spas-Not only of this Country, but such others also, as are of great Repute in other Parts of the World, and the Waters of which are usually imported into these Kingdoms; with some Observations on the Virtues and Efficacy of Sea Water and Bathing. Likewise, Strictures on Quackery in general; and a candid Examination of the respective Merits of James’s Powder, Norton’s Drops, Ormskirk Powder, Ward’s Drops, And Other Popular Medicines. With a full Account of the various Kinds of Poisons, both Animal, Vegetable, and Mineral; and the best Methods of counteracting their respective Effects. – Also, the Means to be made use of for restoring Drowned or Strangled Persons, as published by the Humane Society; and the Plan of Dr. Hawes, Secretary to that benevolent Institution, for preventing Persons being buried Alive. To which is added, The family surgery. Containing Directions for treating Green and Old Wounds; proper Stypticks for immediately stopping the Blood in all Cases; and infallible Applications for the Cure of the Bite of Mad Animals, as well as the Bite or Sting of venomous Animals and Insects. With some approved Receipts for the Cure of Ringworms, Warts, Corns, Bruises, Carbuncles, &c. and Directions for managing the Eyes, Ears, Teeth, Nails, &c. so as to prevent Blindness, Deafness, and Lameness in the Feet. Also, The proper Methods of making and using Salves, Ointments, Pills, Cataplasms, Poultices, Fomentations, Embrocations, &c. &c. Together with The compleat British herbal. And A List of all such Drugs, Chymicals, &c. as are directed to be used in the different Preparations, with their Prices at Apothecaries Hall, London. The Whole Forming A Compleat Body Of Domestick Medicine, Calculated As well to assist Gentlemen of the Faculty, as for the Use of private Families; and in which the utmost Care is taken to recommend such Remedies as are most plain and simple, and of Course the least expensive, and readiest to be procured.