Today’s medical dispatch comes from the Canada Medical Journal, and was submitted to that publication in 1867 by Dr Thomas Jones, a physician from Montreal. It gives a new meaning to the phrase ‘putting lead in your pencil’.

Michael Creigh, a native of Ireland, aged forty-eight years, applied at the Montreal General Hospital, in December, 1862, for surgical assistance. He stated that he had a foreign body in his private parts, which caused him great pain. He was in a semi-flexed position, and said he could not straighten himself, as the body was piercing the back of his bladder.

He must have been in pretty awful pain to go to hospital in the first place, given the cause of the trouble – which was soon revealed.

He was immediately stripped of trousers, and placed on a table with knees bent up. On being interrogated, he said he had been a victim of self-pollution for many years, and that the ordinary manner of practising it had lost its effect upon him, and that he had taken to the introduction of a foreign body into the urethra in preference.

An unusual sexual practice, but well known to experienced emergency health practitioners. The literature is littered with examples; see, for example this recent case of a man who sought medical assistance after inserting a telephone cable into his own penis.

He said he was a stevedore by occupation, and had always a large pencil with him, and this instrument was what he was in the habit of using. This pencil had slipt from his fingers, and had gone into the bladder, so that it was pressing against the back of the viscus, whilst the upper end was coming through under the scrotum. Upon examination a hard substance was found presenting itself as the patient had stated. The usual forceps was introduced to withdraw the pencil with the assistance of the finger in the rectum. but the head of the pencil being rounded, it always slipt off, and the neck of the bladder spasmodically contracted around it. It was impossible to move the body.

What a predicament. Dr Jones decided to perform an operation and remove the pencil through an incision. The procedure used was identical to that used in lithotomy, the removal of bladder stones: 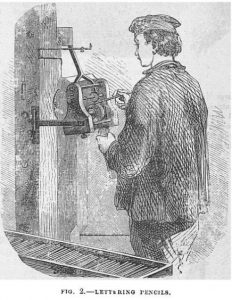 The patient was placed in the position for lithotomy, the head of the pencil presented itself nearly midway between the anus and scrotum. An incision was made through the raphe…

Perineal raphe: a ridge of tissue which runs from the anus along the perineum.

…into the membranous part of the urethra, when the head was seized, with a little difficulty, by a pair of strong forceps, and the entire body extracted. It required some force to withdraw it. There was slight hemorrhage from the transverse artery of the perineum, which required a ligature to control it. The after treatment was the same as for a case of lithotomy, and the patient left the hospital in a week quite well, with a strong determination not to try any more “pencilling by the way.”

Sensible. And what of the foreign body thus removed?

The pencil was six and a quarter inches long, a quarter of an inch in diameter, and called in trade “No. 3 Rehback’s Express Pencil.”

An expensive imported brand, manufactured in Bavaria. If you’re going to indulge in self-pollution, you might as well use the best.

3 thoughts on “The missing pencil”