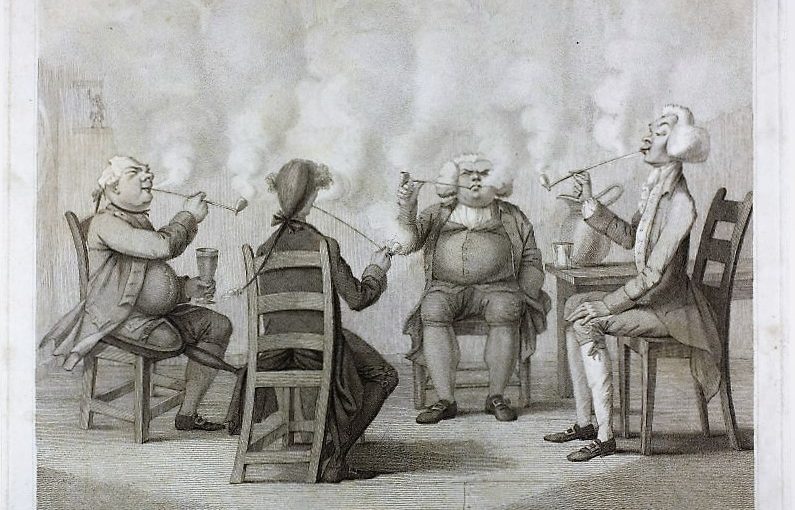 There were plenty of doctors in the nineteenth century who thought that smoking was good for you; so there’s nothing particularly out of the ordinary in this excerpt from an article published in the Medical Press and Circular in 1871:

So much, and often so much nonsense, is prated about the evils of tobacco that its virtues rarely get a hearing, and yet the latter are many and great. To quiet nervous rest; to soothe a ruffled temper; to favour calm and partial thought; to steady and clear (not to cloud) a confused, overworked brain; to counteract the effects of physical exhaustion—these are just the things which tobacco does, and if it can effect these ends safely and pleasantly, who shall deny it a place among God’s good gifts to men?

Who indeed? Certainly not the subject of an unusual obituary published in the same periodical the following year:

A Dutch merchant, named Klaes, who was known among his acquaintances by the name of the King of Smokers, has just died near Rotterdam. According to the Belgian papers he had amassed a large fortune, and had erected near Rotterdam a mansion, one portion of which was devoted to the arrangement of a collection of pipes according to their nationality and chronological order.

I’d love to know what happened to this museum of pipes.

A few days before his death he summoned his lawyer, and made his will, in which he directed that all the smokers of the country should be invited to his funeral, that each should be presented with 10 lb. of tobacco and two Dutch pipes of the newest fashion, on which should be engraved the name, arms, and date of the decease of the testator.

Either he wasn’t expecting much of a turnout, or he was very wealthy indeed.

He requested all his relatives, friends and funeral guests to be careful to keep their pipes alight during the funeral ceremonies, after which they should empty the ashes from their pipes on the coffin.

The poor of the neighborhood who attended to his last wishes were to receive annually, on the anniversary of his death, 10 lb. of tobacco and a small cask of good beer. He desired that his oak coffin should be lined with the cedar of his old Havana cigar boxes, and that a box of French caporal and a packet of old Dutch tobacco should be placed at the foot of his coffin. His favorite pipe was to be placed by his side, along with a box of matches, a flint and steel, and some tinder, as he said there was no knowing what might happen.

With that amount of tobacco in the coffin, I really hope he was cremated.

A clever calculator has made out that Mr. Klaes had, during his eighty years of life, smoked more than four tons of tobacco, and had drunk about 500,000 quarts of beer.

It is said, ‘exceptions prove the rule.’ This is decidedly a very strong exception, and will doubtless be often adduced as forcible evidence against ‘the poisonous effects of tobacco upon the system.’

And no doubt it was. Though I suspect a study on the effects of smoking four tons of tobacco might show a disappointingly high mortality rate.

7 thoughts on “The King of Smokers”