Here’s an intriguing article from the American Medico-Surgical Bulletin of 1895, summarising a paper published in a German journal:

The author reports a successful case of strangulated hernia, in which, after resection of about 3 inches of intestine, he performed lateral intestinal anastomosis.

Strangulated hernia is a condition in which a loop of the bowel protrudes through a hole in the abdominal wall, cutting off its blood supply. It is a medical emergency, as the intestine can quickly become gangrenous. In this case the surgeon sensibly decided to cut out the affected section of bowel. Having done so he then needed to join the two free ends together, a procedure known as anastomosis. ‘Lateral’ anastomosis means that it was the sides, not the ends, of the two sections of bowel that were joined together. Professor Rasumowsky explains why:

First, the patient was insane, and there was danger from his restlessness after the operation, and this method will give the firmest union soon after the operation. Further, there was considerable difference in the diameters of the ascending and descending gut; and, last of all, he wished to conclude the operation as quickly as possible, which is possible only by Senn’s method.

Nicholas Senn, a great American surgeon, had invented a new method of performing this operation a few years earlier – but more of that anon.

Er…what?  Potato plates? Yes, these really were items fashioned from raw potato and used by a surgeon to stitch a patient’s intestines together. But how, and why?

Before the 1880s, surgeons were usually called upon to operate on the intestines only in case of trauma – for the most part, injuries sustained on the battlefield. The advent of general anaesthesia, however, made it possible to treat conditions that had not previously been within the surgeon’s realm. Now they could cut out a section of diseased bowel and restore the continuity of the intestinal tract by sewing the two ends together.

It sounds simple, but there was a problem: sewing two bits of intestine together turns out to be rather tricky.  The anastomosis – the join between the two sections of intestine – tended to leak, causing catastrophic infection. If it didn’t leak it often became blocked, with similarly disastrous consequences.

So what could be done? Several researchers concluded that some sort of mechanical support would prevent leakages while keeping the bowel unobstructed. Nicholas Senn used two rings of bone which had been softened by chemically removing its calcium. The intestines were sewn over these rings, which kept the anastomosis open and leak-free, as seen in the illustration below:

Senn’s rings were intended to be absorbed by the body – so that no trace of them remained by the time the intestines had healed. Surgeons soon found, however, that they took far too long to disappear – and this wasn’t their only drawback. They had to be made to order, an expensive and time-consuming business, which made it impossible to use them in an emergency. So researchers started to look for a superior alternative. Catgut, rubber and animal hide were all tested, but none was entirely satisfactory. And then in 1891 a New York surgeon, Robert Dawbarn, suggested an imaginative solution:

It must be obvious to the surgeon who has kept abreast of the advances made of late years in bowel-surgery, that perfection has not by any means been attained in respect to plates or rings for intestinal anastomosis… The field, then, seems open for a really good emergency plate; and the plate of raw vegetable tissue is the one I have to recommend. I have experimented for some months, and used many kinds of raw vegetable and fruit tissue. That which I like best, for several reasons, is raw potato.

Dr Dawbarn explains that potatoes are easily available, can be carved into shape at a moment’s notice according to the needs of the case, and they will be digested in the intestinal tract. This is what his unusual surgical device looked like: 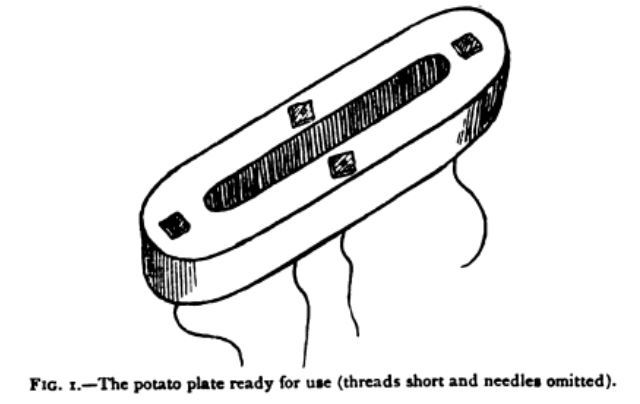 Although he had not yet tested the technique on humans, experimental surgery on dogs had produced promising results:

My first dog died from faulty technique—the plates I made were too large for his diminutive guts. Since then I have had but one death from leakage, in simple excision of a loop of intestine, followed by lateral anastomosis in this method; and only two additional deaths from any cause whatever. The last sixteen dogs operated upon by the new technique have all lived until I chose to kill them, after several days to several weeks, in order to demonstrate the results.

Dawbarn concludes his article with a bullish endorsement of his potato-plate method:

I have conscientiously tried almost all methods that have appeared in the journals during the past five years, in my operative surgery classes. In that time I have certainly demonstrated enterorrhaphy upon human cadavers by one or another method at least one hundred and fifty times, and in addition have experimented considerably on dogs. And I am satisfied that the method herein advocated, in all its details, is the safest of any with which I am acquainted.

Nor was he the only one to use such methods. Later that year Roman von Baracz, a surgeon from Lemberg (modern-day Lviv in Ukraine), began to advocate the use of Swedish turnip (now known as swede or rutabaga) for the same purpose. In 1892 he even operated on a patient for stomach cancer, using swede/rutabaga plates to join two sections of bowel together. The patient made a good recovery.

A French textbook of the time records that potato, swede and turnip were not the only root vegetables to be employed in this surprising fashion: radishes, carrots, even beetroots were stitched into the human bowel.

One historian estimates that more than 300 different methods of bowel anastomosis were invented between 1880 and the 1920s. Few of them were adopted by more than a handful of surgeons and became established techniques. So it is perhaps not surprising that the use of root vegetables and tubers in intestinal surgery was only a passing fad – by the turn of the twentieth century it was already no more than a historical curiosity.