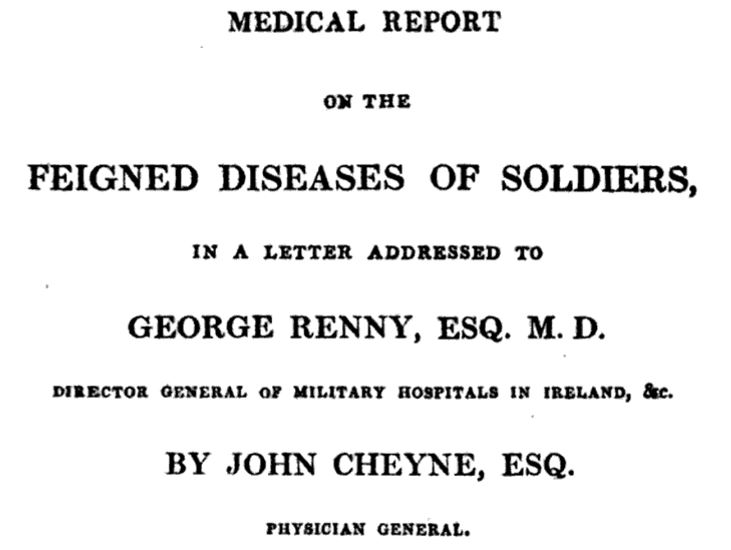 In the 1820s the British physician John Cheyne made a special study of the numerous ways in which soldiers tried to get themselves invalided out of service. Cheyne is best known today as one of the first to identify Cheyne-Stokes respiration, a pattern of disordered breathing which is a useful diagnostic sign in identifying several conditions. He moved to Dublin in 1811, and nine years later was appointed Physician General to the British army in Ireland. In this position he frequently came across soldiers who were feigning injury or illness, and realised that distinguishing real from faked disease could be extremely difficult, particularly for the inexperienced surgeon. It was important to prevent fit and healthy men being discharged from service; but it was equally crucial that genuinely sick patients were not punished as imposters.

In 1827 Cheyne published a paper in the Dublin Hospital Reports summarising his experience of feigned illness among soldiers. He had encountered every fake malady you can think of, from epilepsy to heart disease, tuberculosis to madness. Some even pretended they had been paralysed in their sleep. These were particularly easy to disprove:

Malingerers pretending to have lost the use of their limbs, have been detected by putting them without their knowledge under the influence of opium, and tickling them when in profound sleep.

But my favourite example from this paper is the very first, an English soldier who went to extreme lengths to get himself invalided home – successfully, as it turned out:

When the 18th Hussars embarked for England in 1807, one of the men of that regiment who had been left behind in the King’s Infirmary, joined at Rumford, with his scrotum very much enlarged and inflamed, his story being as follows. Soon after leaving the infirmary, he jumped from a window, upon which he immediately perceived a swelling in the groin; on his landing in Liverpool, it became so large and painful that he could not walk, and was obliged to be forwarded to headquarters in a cart.

Sounds nasty. Could be a large tumour, or an unpleasant infection, or any of several other painful complaints. But all was not what it seemed.

On handling the swelling, the surgeon of the regiment having perceived an unusual crepitus [crackling], as if air were diffused through the cellular substance, immediately wrote a state of the case to the late Mr. Obre, who was surgeon to the King’s Infirmary, and in the meantime he used warm applications, purgatives, and low regimen.

The regimental surgeon’s suspicions had been aroused: while one would expect to find fluid in a swollen scrotum, air is much more unlikely.

Mr. Obre, in reply, enclosed a paper that had been picked up in the ward of the infirmary, in which this man lay, containing “a receipt for making a rupture,” in which were directions to puncture the bag with a corking pin, and then, by means of a piece of a tobacco pipe, to blow it up with air, and if it were wished to produce a double rupture, the same thing was to be done on the other side, after which warm poultices were to be applied to take down the inflammation.

Because why wouldn’t you?

The man strenuously denied ever having made use of any such means. By the applications directed, the swelling gradually subsided, but, while under treatment, he got, or pretended to get a pain in the right hip and groin, and inability to move the limb. From this man’s previous history, his new complaint was believed to be feigned. He was placed on low diet, the shower bath was used along with purgatives, a mercurial course, repeated blisters and issues, but he would not yield.

An issue was a wound deliberately made in the skin, usually with a scalpel. After the incision had been made, an object (frequently a pea or bead) was inserted to keep the wound open and provoke suppuration. Not a terribly pleasant treatment, nor an effective one.

The commanding officer of the regiment disregarding the opinion of the surgeon and Dr. Warren, Deputy Inspector of hospitals, had this man brought forward and discharged previous to the embarkation of the corps for the Peninsula, and was much displeased because the surgeon refused to sign a recommendatory certificate, by which refusal the reported man, who had been many years in the regiment, lost his pension.

The scrotum-puncturing soldier had the last laugh, it appears:

The same commanding officer, after his return from Corunna, met this man in London perfectly well, and following the laborious occupation of a porter.