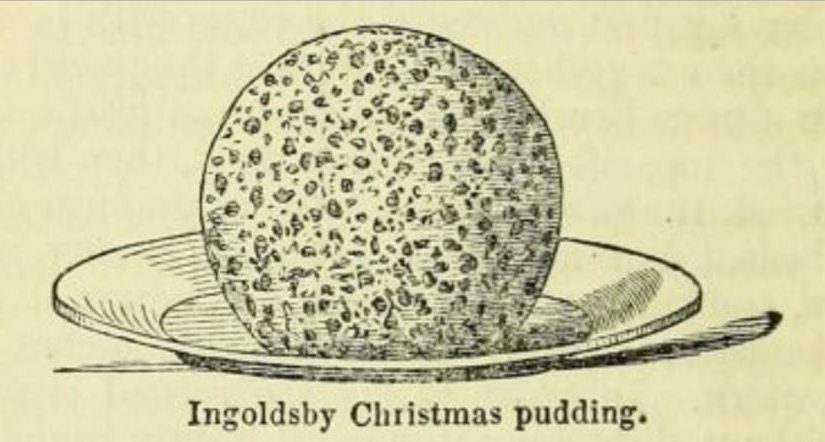 Continuing this blog’s recent Christmas theme, here’s a short article originally printed in the Medical Adviser in 1825.  It was at about this time that one of the staples of the modern Christmas dinner – the Christmas pudding – began to be a regular feature of festive meals. More usually referred to as a plum pudding, this boiled pudding containing fat, flour and dried fruit was originally eaten throughout the year. Perhaps the first explicit reference to this dish as a Christmas speciality comes in Modern Cookery for Private Families, a cookbook published in 1845 by Eliza Acton:

For some reason, a writer for the Medical Adviser took great exception to the humble plum pudding.  His diatribe begins:

This is one of the relics of barbarous cookery — a compilation of grossness, gastronomically unscientific, and pre-eminently unwholesome. Sugar, dough and fat are its basis, and in such proportion, that its lighter ingredients have not power to redeem its crudity.

What on earth could be wrong with a wholesome boiled pudding full of tasty fruit?

No wonder John Bull is dyspeptic, hypochondriac, and suicidical, when plum-puddings and malt-liquor occupy his stomach so often. Boiled dough is the food of his youth—solid, stone-like dough — and when he grows up, he mollifies his mess with sugar and raisins; scarcely a day passes without a wedge of his favourite dish— plum-pudding; and then he mopes and drinks his ale, until a sufficient quantity of coculus Indicus, or opium, or bangue—the narcotic portion of his beverage—nods him down to sleep.

Coculus indicus is the fruit of a climbing plant found in India and parts of south-east Asia. It is a narcotic which was sometimes used by unscrupulous brewers to adulterate their beers – a practice which made it far more potent. Bangue, more commonly known as bhang, is cannabis.  It and opium were sometimes used in the same way.

Yet John wonders why he suffers from indigestion! Leave off plum-pudding. The French, who know better than we do the science of cookery, laugh at us for still patronizing it. We know what it is to oppose a popular prejudice; we did so with cravats and marriage-beds, but we cannot blink truth.

Cravats, marriage-beds and Christmas puddings: spawn of the devil.

One thought on “The perils of the Christmas pudding”