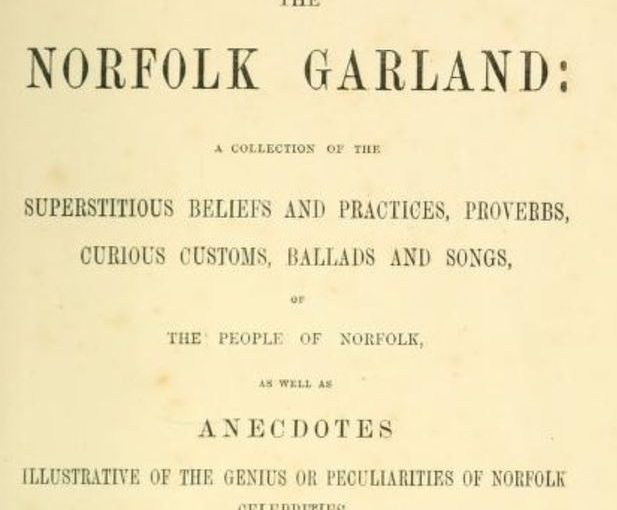 If you lived in rural Norfolk in the nineteenth century and wanted to get rid of a wart on your hand, there were several options open to you. You might, for instance, steal a piece of beef (it must be stolen, otherwise the cure would not work) and bury it; as the beef decayed, your wart(s) would fade away. Or you could make the sign of the cross over each wart with a pin or pebble and then throw the pin (or pebble) away. Or you could apply the froth from freshly-poured ale on to the warts on three successive mornings, when nobody could see you, and they would soon disappear.

These are folk remedies, of course, documented in a work published in 1872, and entitled The Norfolk Garland: a collection of the superstitious beliefs and practices, proverbs, curious customs, ballads and songs, of the people of Norfolk. Its author was John Glyde (1823–1905), described by the Oxford Dictionary of National Biography as a ‘social commentator and antiquary’, which scarcely does him justice. He was also a prolific writer, bookseller, proprietor of an agency for domestic servants, historian, librarian, and sociologist of religion. Oh yes, and he was also a hairdresser.

The Norfolk Garland is one of Glyde’s ventures into folklore; he had already published a similar volume for his own county of Suffolk. He devotes one of the early chapters to traditional medicine, remedies that must have been handed down from generation to generation for centuries and were still in use in the 1870s. This, for instance, is an old cure for whooping cough:

It is necessary that a live flatfish should be procured – a ‘little dab’ will do. Then it must be placed whilst alive on the bare chest of the patient, and kept there till it is dead. This is considered to be a certain remedy, though it must be confessed it is one somewhat difficult of accomplishment.

If this was not effective, there were numerous alternatives: for instance, the ‘spider remedy’.

Let the parent of the child afflicted find a dark spider in her own house, and hold it over the head of the child, repeating three times:

Spider, as you waste away / Whooping cough no longer stay.

The spider must then be hung up in a bag over the mantle-shelf, and when the spider has dried up the cough will be gone.

Animals play a prominent part in many of these remedies, for some reason:

To eat a roasted mouse is said to be a certain cure for the disease. I have heard of a live frog, which had been held with its head within the mouth of the person affected, being hung up the chimney of the patient’s house, in the belief that as it died the whooping cough would vanish.

You could, alternatively, give the patient some milk which a ferret had previously lapped.

Whooping cough was a serious illness with significant mortality. But Norfolk medical lore had cures for even quite trivial complaints.

Mr. Rayson informs me that finger rings made from the handles of coffins are deemed sure preventives against cramp. He says: “In my boyhood the old parish clerk of the village used to preserve the old coffin handles which he found in the churchyard for the purpose of making cramp rings.”

If wearing a ring made from a coffin handle seems a bit macabre, you’re not going to like what they recommended to remove wens – fleshy bumps usually known today as lipomas:

To cure wens or fleshy excrescences the revolting remedy has been tried of passing the hand of a dead body on three successive days over the part affected.

But even this remedy is mild when compared with the practice in some other counties, where it is considered necessary to have the wen stroked by the dead hand of a man that had been hanged. In some cases this has been done after the criminal is dead, but still hanging. On execution days at Northampton numbers of sufferers used to congregate round the gallows in order to receive the “dead stroke”, as it is termed. In 1853 the body of a suicide, who had hanged himself in a village not far from Hartlepool, was laid in an outhouse awaiting the coroner’s inquest. The wife of a pitman at Castle Eden Colliery, suffering from a wen in the neck, according to advice given her by a “cunning woman,” went alone and laid all night in the outhouse with the hand of the corpse on her wen.

Today the usual thing is to get a doctor to cut it out. It’s easier, and involves 100% less corpse.