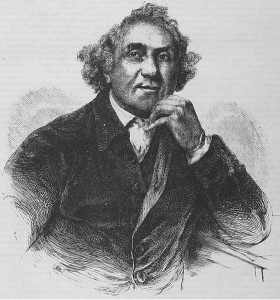 John Hunter was one of the great medics of the eighteenth century.  His name lives on today in the Hunterian Museum, a huge collection of anatomical specimens – both human and animal – which he amassed over many years for study and teaching.  He was an innovative surgeon whose practice was heavily influenced by the discoveries he made at the dissecting table.  Among his best-known feats was a daring operation for aneurysm in 1785, which remained the standard treatment for many decades afterwards.

Much less well known, but in its way just as original, was a procedure five years later in which he fed a patient via a tube to the stomach.  This technique is known as enteral feeding, and today it’s a vital part of hospital care for many patients.  Hunter’s case is recorded in the Transactions of a Society for the Improvement and Chirurgical Knowledge for 1793:

John S—l, about fifty years of age, became hypochondriac and attacked by what are called nervous disorders, in consequence of anxiety of mind, brought on by various distresses. In the beginning of his complaints he felt something crack within his head, and from that period his sensations became very acute, his passions, sympathies, and aversions exceedingly strong.

December 28, 1786, while under the influence of an uncommon degree of hypochondriasis, about one o’clock in the morning, he brought up a glutinous substance from his stomach, like the white of an egg, which seemed to relieve him, but did not remove an aversion which he had taken to his relations, his children, and even to life itself, of which he was tired.

He afterwards continued affected with low spirits and pains in the head, became restless, and turned his mind to religious subjects; as these affections either increased or diminished, he had frequent and severe fits of crying.

In February 1790, John S caught a cold, and on March 7th woke with a sense of choking: the muscles at the back of his throat became paralysed, and he found he could not swallow.

By the advice of a physician he was cupped, blistered round the throat, and electrified; he was, in the mean time, supported by nourishing clysters [enemas].

There was little improvement in his condition, and two days later his doctor summoned John Hunter to the patient’s bedside.

Mr. Hunter, considering the support of the patient, and some mode of administering medicine, to be the first object, proposed that a hollow flexible tube should be passed down into the stomach, through which he might receive nourishment and medicines; and mentioned his having an instrument of that kind, made of spiral wire, covered with gut for the purpose of injecting liquids into the stomachs of animals, which might be applied to the present case; but that Mr. Gumming was better able to assist them in getting a tube that would answer that purpose. He also recommended, when the tube was made, to inject jellies, eggs beat up with a little water, sugar, and milk, or wine, by way of food, and that the medicines might be mixed with it.

The doctors agreed to this plan, and injected food and medicine into his stomach twice a day.  This continued for over a month, and there was a slow but gradual improvement.

Mr. Hunter was again consulted, and ordered two scruples of flour of mustard, and one dram of tincture of valerian, twice a-day: under this treatment the power of swallowing gradually returned, and on the 29th the use of the tube was no longer necessary. The natural sensation of the throat and right arm had not returned in the month of April.

The design of this tube is rather interesting:

The instrument made use of was a fresh eel-skin, of rather a small size, drawn over a probang…

A probang is a long probe with a sponge at the end, used to clear obstructions from the oesophagus.  In the eighteenth century they were usually made of whalebone.

…and tied up at the end where it covered the sponge, and tied again close to the sponge where it is fastened to the whalebone, and a small longitudinal slit

was made into it just above this upper ligature. To the other end of the eel-skin was fixed a bladder and wooden pipe, similar to what is used in giving a clyster, only the pipe large enough to let the end of the robing pass into the bladder without filling up the passage. The robing, thus covered, was introduced into the stomach, and the food and medicines were put into the bladder, and squeezed down through the eel-skin.

The article concludes with a helpful note for those of us dubious about our ability to get hold of these raw materials:

An eel-skin seems very well adapted for this purpose, being smooth, pliable, and readily passed into the stomach; but as cases of this kind may occur where eels cannot be procured, a portion of the gut of any small animal, as a cat or lamb, will make a very good substitute.

This must be one of the earliest cases of enteral feeding on record – does anybody know of an earlier one?