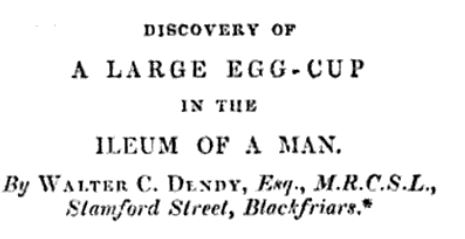 In 1834 the Lancet published a wonderfully unusual article by Walter Dendy, a surgeon from Blackfriars in London. The heading at the top of each page refers to it simply as ‘Mr Dendy’s Egg-Cup Case’ – a splendid description of a splendid case:

Mr Adams, a man 60 years of age, had been afflicted with inguinal hernia 25 years, which, although very frequently descending into the scrotum, had never been strangulated.

An inguinal hernia is one affecting the groin. This relatively common condition occurs when part of the abdominal contents (usually a portion of intestine) drops through the inguinal canal, a passage between the abdominal cavity and the external genitalia. It usually manifests as a soft swelling around the pubis, although in more severe cases in men the hernia can even protrude into the scrotum. A strangulated hernia is one in which the compression of the local blood vessels leads eventually to tissue death.

Three months previous to his death he laboured under diarrhoea, which terminated in dysentery, from which he was partially relieved.

Dysentery, diarrhoea accompanied by blood, may have been caused by some degree of strangulation. The symptoms that followed would appear to confirm that diagnosis.

Three weeks before his death intense abdominal pain was felt, with retching, &c., the pulse being 95, and rather full. The inflammatory action was diffused, and no particular uneasiness was referred to the hernia, which was apparently reducible. Leeches and the antiphlogistic plan restored the patient to comparative ease.

The ‘antiphlogistic plan’ was a therapeutic regime very much in vogue in the 1830s. It was aimed at reducing inflammation, and its main measures were purging the body by bloodletting, laxatives and emetics.

About a week subsequent to this the acute symptoms returned, with other signs, indicating strangulation or obstruction, such as stercoraceous vomiting and singultus, tumefaction of the abdomen, &c. – the bowels however repeatedly ejecting very scanty fluid evacuations.

‘Stercoraceous’ is an unpleasant word for an unpleasant phenomenon. The patient was vomiting material which resembled faeces. ‘Singultus’ is an unnecessary piece of medical jargon meaning hiccups.

On minute examination I discovered a very small knuckle of intestine deeply situated, which appeared to be intimately adherent to the mouth of the sac. As there was in this tumour extreme tenderness, I did not hesitate, after a brief endeavour to return it by the taxis, to propose an immediate operation.

‘Taxis’ is manipulation. Strangulated hernia is a medical emergency which is rarely, if ever, resolved without surgical intervention; Mr Dendy’s instincts were absolutely correct.

The friends consented, but the patient refused, stating no reason but that he did not like to be cut.

He may have had other reasons, as it later transpired.

I therefore contented myself with palliative means, having by repeated gentle pressure returned the knuckle to the mouth of the sac, after which the stereoraceous vomiting ceased.

He sunk gradually, the abdomen becoming more and more distended, and on the 4th of December he died at three p.m., without having at any time during his illness made the slightest allusion to the circumstance, which was eventually proved to have been the essential cause of his severe disorder.

This ‘circumstance’ became clear as soon as Mr Dendy performed a post-mortem.

On opening the abdomen the small intestines were seen much distended and discoloured, and on turning the superior folds aside, my finger came in contact with a hard substance which projected through the coats of the intestine. This intestine was the cross-fold of the ileum, and on further examination we were astonished to discover, through its attenuated coats, an earthenware egg-cup closely impacted within it…

…the bevelled and indented edge of the cup resting on the spine—the broken stem of the cup, which projected through the bowel, near the crista of the left ileum.

The ‘crista’ or crest of the ilium is the curved part at the top of the pelvic bone. Confusingly, Mr Dendy here makes a crucial spelling mistake: the ‘ileum’ is the small intestine, and the ‘ilium’ a bone in the hip. The egg-cup had actually pierced the bowel – at this date, an almost inevitably fatal injury.

Immediately beyond the mouth of the cup, which pointed downwards, relatively to the course of the intestine, and was nearly filled with liquid feces, the ileum turned towards the left groin, where it formed the adherent hernia, and then again crossed towards the caecum, the length of bowel between the cup and the caecum being about ten inches.

So there were in fact two separate injuries to the bowel: the hernia, and the puncture caused by the egg-cup. Naturally enough, Mr Dendy was keen to establish how this unusual foreign object had found its way into the patient’s small intestine:

I therefore requested my friend, Mr. Stephens (as I was engaged with my pencil at this point), to trace the colon from the caecum downwards. This inspection demonstrated the whole course of the large intestines to be in a comparatively healthy condition,—the colon decidedly so—and the ileo-caecal valves perfect,—-the caliber of  these intestines being rather contracted from their symmetrical proportion. The small intestines, on the contrary, the ileum especially, were extremely distended and discoloured,—the graduated tints of crimson and dull purple evincing long-continued disease, which was still further confirmed by numerous patches of ulceration.

There follows a long and technical discussion of the possible means by which the egg-cup reached its position in the small intestine. Mr Dendy concluded that the patient had swallowed it rather than inserted it through the anus, his reasoning being that the lower part of the gut appeared healthy, while the small intestine was obviously diseased. He does admit, however, that the anatomy of the upper part of the digestive tract, and the physiological mechanism of swallowing, would make even this an exceedingly difficult thing to accomplish. Though acknowledging these difficulties with his thesis he does not attempt an explanation, merely observing that the circumstances ‘render it one of the most curious instances of which we have any record.’

I suspect that most modern experts would agree, on purely psychological grounds, that it is far more likely that a patient would stick an egg-cup up their bottom than swallow it. Moreover, it would also explain why this unfortunate man was so unwilling to mention the large foreign body lodged in his gut. The article concludes with a splendid engraving of the egg-cup, complete with its charmingly naïve decoration, which appears to show a shepherd (or bishop?) following a man with an umbrella over a bridge. [Update: see below image for new information about the design]

Not long after publishing this post I heard from a friend who pointed out that the design looks like the pseudo-Chinese decoration popular in English porcelain of the period. And indeed after a bit of digging I found this image of an early nineteenth-century porcelain teacup: 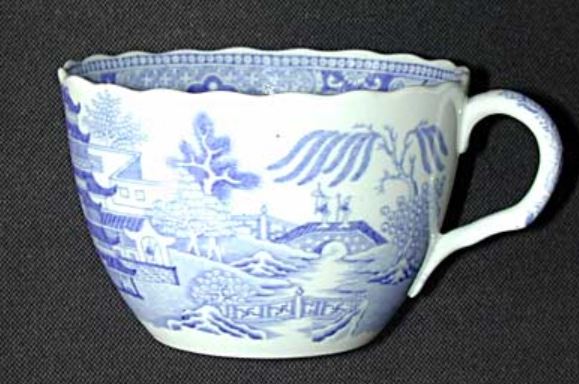 As you can see, the two designs are virtually identical. This cup was manufactured by Rathbone, a company active in the Staffordshire Potteries between 1812 and 1835. The pattern is known as Broseley, but as far as I can establish, it was only Rathbone that included the little men with their parasol and crook on the bridge. Other firms had the bridge, but the people on it either carried heavy loads or nothing at all.

And that’s how I ended up spending a significant portion of my day establishing who manufactured an egg-cup found inside a nineteenth-century patient’s small intestine.