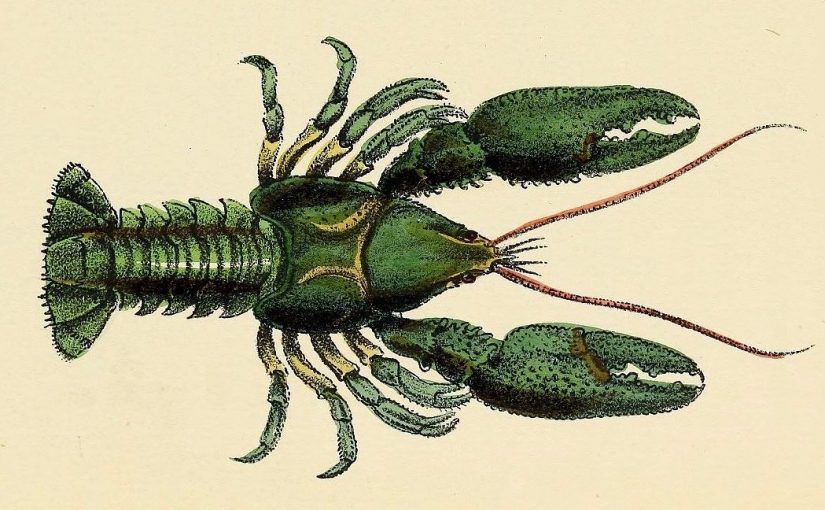 Philipp Franz von Walther was an eminent German surgeon highly regarded for his expertise in ophthalmology and as a pioneer in plastic surgery. While serving as professor at the University of Bonn he was also the co-editor of an influential periodical, the Journal der Chirurgie und Augenheilkunde. In 1822 he published this surprising clinical report, which was subsequently translated (and, mercifully, much abbreviated) for the Quarterly Journal of Foreign and British Medicine and Surgery:

In 1821 a young man aged seventeen applied to Walther, affected with phthisis…

‘Phthisis’ is an old name for tuberculosis, through in this case the word is being used rather loosely to describe any sort of lung infection. It had arisen, we are told…

…from the claw of a craw-fish which he had swallowed in 1811, and which had got into the trachea, and remained in the right bronchia, occasioning violent convulsions, coughing, and haemoptysis.

By which is meant that he was coughing up blood. This is hardly surprising: crawfish (now generally known as crayfish here in the UK) have sharp and knobbly claws, objects one really does not want lodged in one’s lung. The doctor appeared to think that the claw had passed into the network of air passages inside the organ. But my guess is that it lodged in the right bronchus, the main airway to the right lung.

Oil of sweet almonds, followed by opiates, purgatives, assafoetida, and corrosive sublimate, eased the cough; and he thought, as he became easier, that the claw must have been removed. There remained, however, phthisis, which was followed by cramps, which did not yield to bathing.

For the next three years he regularly coughed up pus, which doesn’t sound much fun. He also suffered from attacks of fever, symptoms strongly suggestive of repeated chest infection.

He had subsequently a brain-fever, strong convulsions, chorea, strabismus, and somnambulism.

Chorea is a neurological disorder causing involuntary jerking movements; strabismus is squinting. But his symptoms were about to get even more dramatic:

Some time after he was seized with an irresistible desire to bite, and, when he could find nothing else, he bit his own hands. He afterwards had distressing optical illusions and could not look on anything black without screaming.

It is difficult to work out the course of the disease: had the infection in his lungs spread to his brain?  The neurological symptoms might have been the result of bacterial meningitis. On the other hand, it is possible that psychiatric factors were more important: he had endured chronic pain and discomfort for several years, day and night, and there is no doubt that his mental health had been badly affected.

He lost the sense of taste, and it was painful for him to utter a sentence. His limbs were then paralysed; and he took a great passion for cutting and piercing instruments, and, when alone, he cut and stabbed himself. Sometimes he sought to strangle himself; but, after the excess of the furious fit was over, he complained of great fatigue, and of uncommon pains.

He spent two years in this pitiable state; the doctor remarks that during this time he ‘amused himself like an infant’, so impaired was his mental capacity.

After a time his paralysis was partly removed again, and he began to walk and to try medicines, all of which he had given up.

‘Everything was tried,’ remarks Dr Walther, from blisters to iron, Peruvian bark to camphor. The early nineteenth-century medicine cabinet was ransacked without success.

In 1815, his nervous symptoms returned during winter, and disappeared again without medicine in spring. In autumn they again returned, more violently than ever, and his expectoration contracted a very remarkable foetor. He bruised everything he could come at, and had a strong propensity to leap out of the window, which he once accomplished from the first floor. His appetite was gone, and his bowels torpid.

Living in the twenty-first century, when most foreign bodies can be easily and quickly removed from the airways, it is difficult to imagine the sheer misery that the young man must have endured. It is quite understandable that he might have sought to end his own life.

In January, 1816, he lost his voice, his sight, and his hearing; but these he recovered in the succeeding summer; and, the year following, the same circumstances occurred. In 1818, he lost his appetite, and could only take bread, honey, and coffee. Medicines were again tried, with no avail.

But the end of the unfortunate patient’s suffering was finally in sight.

On the 27th of April, 1818, after a violent coughing for several days, he brought up the claw of the craw-fish, with a great quantity of pus; and this put him in great hopes of a cure. In 1819 he had a quotidian fever, which was subdued by bark, myrrh, and acetate of lead.

A quotidian fever is one that recurs daily, typically for a few hours at a time. In an age before antibiotics, his life was still very much at risk. But fortunately this case had a happy outcome.

In 1820, he took no medicine. During the winter of 1821, he complained of pains in his side, and spit up blood. He tried the vapour of tar and sulphur: the expectoration ceased, he recovered his health, and can now attend to his business.

I’ve been unable to find any further reference to this patient, but it seems that he was restored to full health. A pretty impressive outcome, when you consider that between the ages of 17 and 24 he had a crayfish claw stuck in his airway, and that for three year after that he was still plagued by a recurrent infection that might have carried him off at any time.