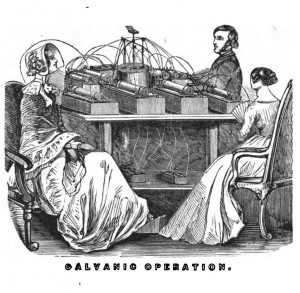 Here’s something to get unnecessarily worried about: apparently it’s possible to catch a disease through an electric wire!

As reported in the Medico-Chirurgical Review for 1833, a doctor treating a patient for a persistent case of ague (malaria) decided to try the fashionable galvanic therapy.  This entailed a regular course of electric shocks administered to the patient’s body.

The most extraordinary circumstance remains to be mentioned.  Dr. Smith himself had held the ball, with which he took sparks from his first patient, during the hot stage. In the same evening, he found himself unwell; but had no suspicion of the nature of his complaint, until the recurrence of the paroxysm convinced him that he had become the subject of ague.  He allowed these to recur to the seventh time, before he attempted the cure by electricity, which was speedily effected… As he had never been the subject of ague, and had not been more than usually exposed to causes calculated to give rise to it, he felt persuaded that it had been communicated to him by electricity from his former patient.

In order to test this unlikely hypothesis he decided to try an experiment, and deliberately infected one of his assistants.

On the seventh day, the man was placed on the insulating stool, and connected with the positive conductor; a small incision was made with a lancet in the pustule, and an incision was also made in the arm of a lad with a new lancet; a wire four inches long was passed through a glass tube, one end of which touched the pustule on the man’s arm, and the other the incision on the boy’s arm — the electrification was continued for eight minutes, when the boy was removed.

His arm was daily examined, and it was found, that he was as completely vaccinated [infected] by the electricity as any person could be by the usual mode.

Thus proving his theory.  Well, not quite: when he repeated the experiment on two girls, what he initially thought were signs of infection soon disappeared.

My friend Charles Woodward afterwards repeated this experiment upon an infant, the child of one of his friends, but with this difference, that he did not allow the conducting wire to come in contact with the child’s arm.  The electric fluid was consequently transmitted in the form of small sparks.  The disturbance which these produced, though trivial, prevented the application from being prolonged for the full time, which my friend would have wished; inflammation however succeeded, and, until the sixth day, was such as to induce the medical attendant to believe, that the vaccination had been complete; from that day, however, the pustule died away.

Putting aside for the moment the ethics of knowingly trying to infect three perfectly healthy children, these are not exactly impressive results.  The editor of the Medico-Chirurgical Review clearly felt similarly, appending this remark to the article:

As a matter of course, we are merely reporters, not vouchers, of the occurrences. — Ed.

One thought on “Catching a disease through an electric wire”