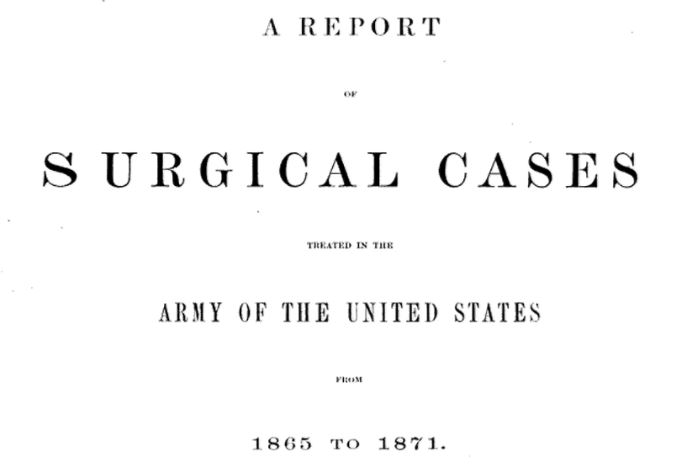 In 1871 the Surgeon-General’s office of the US Government published a document identified simply as Circular no 3. The dull bureaucratic title gives little hint of the varied material within: a comprehensive survey of surgical activity in the US Army during the preceding six years. As one London medical journal noted, the book gives some idea of the extraordinary range of terrain and circumstances encountered by American soldiers: from frostbitten limbs on the frozen prairie to gunshot injuries caused during fights in the Wild West.

One of the longer chapters is devoted to injuries caused by arrows – frequently encountered by American army surgeons, as a result of the lamentably frequent skirmishes with Native American tribes, but by now virtually unknown in Europe. Native American archers were outstandingly adroit with their weapons: one surgeon observed that it was ‘exceptional to meet with a single wound; if one arrow takes effect it is immediately followed by two or three others.’

That’s bad enough; but Case 455 of Circular no 3 documents the case of an unlucky soldier who was shot with eight arrows – and lived to tell the tale.

Private George Osborn, of Troop D, 2nd Nebraska Cavalry, was wounded by arrows in a skirmish with Indians near Pawnee Reserve, Nebraska, on June 23, 1863.

The ‘Indians’ in question were the Pawnee, a Native American tribe originally inhabiting an area around the North Platt river in Nebraska. In the early 18th century their population had been at least 60,000; but by the 1860s their numbers had plummeted, ravaged by war and diseases introduced by the white settlers.

Eight arrows entered at different parts of his body, and were all extracted except the head of one, which had entered at the outer and lower margin of the right scapula, and had passed upward and inward through the upper lobe of the right lung, or trachea. Haemorrhage at this time was so great that all hope of recovery was abandoned.

Eight arrows does seem a lot to cope with. The eighth had taken a particularly nasty trajectory – it had entered his body at the bottom of his right shoulder blade and then apparently through the lung and/or windpipe. He bled copiously from the mouth, usually a very bad sign indeed.

The patient, however, rallied, but continued to suffer great pain upon swallowing or coughing, and occasionally spit blood. In July, 1866, more than three years subsequent to the receipt of the injury, he called at the office of Dr. J. H. Peabody, to undergo an examination, with a view of applying for a pension, stating that his health was much affected from the presence of the arrow-head. He was much emaciated, and expressed himself tired of life.

Well, it doesn’t sound much fun. Private Osborn was, presumably, expecting the appointment to be a formality. But rather than just put his signature to a pension application, Dr Peabody decided to do what he could to help the patient. There was a small fistula (opening) just above the man’s breastbone; Dr Peabody decided to have a look inside the wound and see what he could find:

The point of the arrow was found resting against the bone, about an inch and a half below, the head lying flat against the trachea and oesophagus, with the carotid artery, jugular vein, and nerves overlying.

In other words, in a really awkward spot. The slightest damage to either blood vessel or nerves might prove rapidly fatal, or permanently disable the patient.

After some little difficulty, the point of the arrow was raised above the sternum, and it was extracted without the loss of an ounce of blood, the edge grating against the sheath of the innominate artery during the operation.

Phew. The ‘innominate’ is an old-fashioned name for the brachiocephalic artery, a major vessel which branches off the aorta. It supplies blood to the head and the right side of the body and, trust me, you really, really don’t want to puncture it by accident.

The missile measured an inch at the base, and was four inches long. Its form is shown in the annexed wood-cut, nearly, but not accurately, of half the natural size. The patient, appearing highly gratified at the result, rode to his home. His health underwent a remarkable improvement.

There were, I think it’s safe to say, good reasons for that.