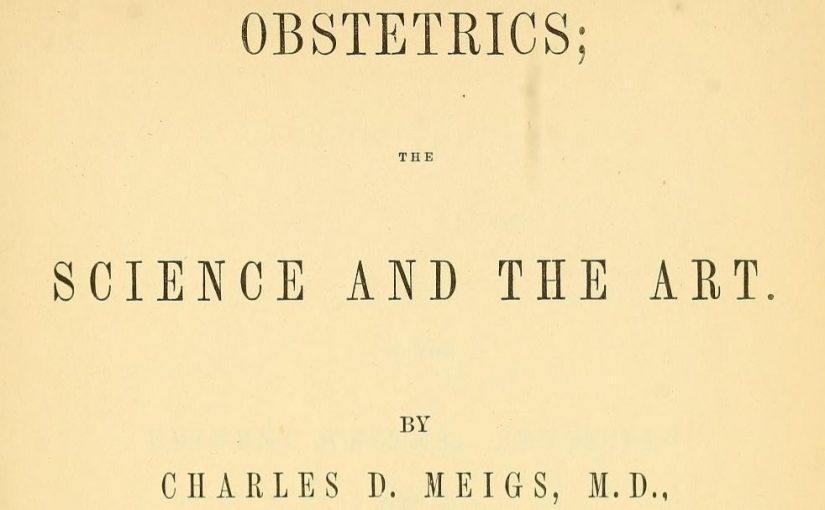 Charles Delucena Meigs (1792-1869) was an American obstetrician of some eminence. His textbook Obstetrics, the Science and Art was influential and remained in print for many years.

Perhaps the most notorious passage of this work is a section he added to the 1856 edition, explaining his opposition to the use of anaesthesia in childbirth. Chloroform (and, in the US, ether) had been discovered in the preceding decade, and in much of America and Europe was already widely used to ease the pain of childbirth. Meigs and the Scottish obstetrician James Young Simpson – the pioneer of chloroform – exchanged friendly letters on the subject in 1848: Simpson recommending chloroform in childbirth, and Meigs explaining courteously his objections to the practice.

The nature of Meigs’s opposition has often been misrepresented. It is certainly true that he condemned the

doubtful nature of any processes that the physician sets up, to contravene the operation of those natural and physiological forces that the Divinity has ordained us to enjoy or to suffer.

But Meigs was not suggesting that women had to suffer ‘because God says so’. He goes on to clarify the point, arguing that labour pains are an indication that the process is continuing with the necessary force; take away that pain, he suggests, and you might also be robbing the woman’s body of the power to expel the baby. He was also concerned that anaesthesia might introduce unnecessary risk:

should I exhibit the remedy for pain to a thousand patients in labor…and if I should in consequence destroy only one of them, I should feel disposed to clothe me in sackcloth, and cast ashes on my head for the remainder of my days.

Chloroform caused numerous sudden deaths during surgery and childbirth – one of the reasons its use was eventually abandoned. So Dr Meigs certainly had a point, however often he has been derided for his views.

Elsewhere in Obstetrics, the Science and Art can be found this remarkable case history:

Saturday, August 1, 1840. Being at the Pennsylvania Hospital, a lady came to me, and requested that, as a medical officer of the House, I would see A. G. in Clark Street, Southwark, to order her admission in the Lying-in ward.

‘A.G.’ is identified in another source as Ann Gideon.

I was told that her confinement, which had been looked for in April, had not yet taken place, that she was suffering under the effects of this unnatural pregnancy, and that the neighbors thought she ought to receive the cares of the Institution.

Wait a minute: she was expected to give birth in April, but now it’s August? Something is not quite right here.

Upon proceeding to Clark Street, I learned that G. was twenty-six years of age, that she had been confined in the Pennsylvania Hospital on the 18th of February, 1839, and was again pregnant in the month of July, 1839, while still suckling her son.

It is entirely possible for a woman to become pregnant again within a few weeks of giving birth, so this in itself is unremarkable.

Being very much indisposed, she called a physician, who directed her to wean the child, as she was doubtless pregnant. She did not, however, wean him until September, when she felt sure of her pregnancy. On the 20th of November she quickened, and her husband very distinctly perceived the motion of the child at Christmas.

‘Quicken’ is an archaic term denoting the moment when a woman becomes aware of the movement of the fetus. Pretty conclusive signs of pregnancy, you’d think.

On or about the 10th day of April, 1840, being very large and lusty, she was taken in the night with the symptoms of labor, and called in her neighbors. She said the waters broke in the night, and wetted her profusely. After the rupture of the membranes, the pains were great, and she supposed the child would be soon born; but as the pains not long afterwards grew easier, she did not send for the doctor till morning, at which time, they had become much less distressing; in short, they gradually left her; but she continued big, and could daily, and even now, feel the child when it moved, which gave her great pain.

Again, the breaking of her waters would seem to indicate that birth was imminent. But nothing happened. Dr Meigs found her suffering from a fever and abdominal pain. She was admitted to the hospital on 4 August. Her cervix was already dilated, and she also had an epigastric hernia – the protrusion of the intestines through weakened muscles above the umbilicus.

She remained in the ward, suffering daily and nightly with abdominal pains, until she fell into labor on the 11th of September, and the child was born on the 13th of September, about daylight. I sat up with her all night, being deeply interested to observe all the phenomena of the case. The child, a male, was of a medium size, weighing seven or eight pounds; in good health.

She gave birth almost six weeks after Dr Meigs first suspected the event was imminent! And it was not a pleasant experience for the poor woman.

The labor was exceedingly tedious and distressing. She had a pretty good getting up, but the hernia of the linea alba caused great weakness, which was in a measure relieved by a truss made expressly for her. She was discharged October 11th, 1840.

To recap: the patient claimed that she could feel the fetus moving in November 1839; her waters had broken in April, close to what she assumed to be her due date. The baby did not actually put in an appearance until five months later. Did Dr Meigs believe this timeline?

Of course, in relating this case, I do not consider myself responsible for the truth of its statements further than as they are worthy of confidence in view of the character of the patient herself, and as the facts came under my notice. She had the appearance of perfect candor and sincerity in all that she said about it, and I have no doubt she thinks her pregnancy began in July, 1839, and ended, as I have said, on the 13th of September, 1840, having endured near fourteen months, or four hundred and twenty days, instead of two hundred and eighty, the usual term of a pregnancy.

Dr Meigs stops short of endorsing the woman’s claim outright. He is careful to state that ‘I have no doubt she thinks her pregnancy began in July, 1839’, implying that he believes otherwise. But why include the case history in his book in the first place, if he was sure it was nonsense? Later authors quoted it, but many clearly thought the  claim of a 420-day pregnancy was ludicrous.

As indeed it is. Human pregnancies last, on average, 270 days. There is quite significant variation – one recent study found that in non-premature deliveries the figure might vary by as much as 37 days – but there is an upper limit. After 42 weeks (294 days or so) a pregnancy is termed ‘post-term’ and becomes medically risky as the placenta starts to fail. It’s difficult to find reliable figures, but 300 days is probably close to the maximum that is compatible with delivering a healthy baby.

I have tried and looked in vain for a record length of pregnancy in a human. The Chinese newspaper the People’s Daily claimed a few years ago that a woman had given birth after a 17-month pregnancy, but the story is a) unsupported by any independent evidence; and b) ridiculous. Time magazine reported in 1945 on a pregnancy said to have lasted 375 days (53 weeks), but it is overwhelmingly more likely that the woman had a miscarriage and then fell pregnant again. If there are properly evidenced claims of lengthy pregnancy that you’re aware of, please let me know in the comments!

As for Dr Meig’s patient Ann Gideon, a sensible explanation was put forward by the British obstetrician Charles Clay in his Observations on the Term of Utero-Gestation, published in 1855. Clay suggested that Ann had fallen pregnant in December, and that the ‘labour pains’ she experienced in April were in fact the first movements of the fetus. If that took place at around four months, this would mean the entire pregnancy had lasted ‘only’ 278 days or so – absolutely within the normal range.

Whatever the explanation, Ann was clearly not deterred from going through the experience again:

In July, 1841, she is pregnant again, and still suffers from the protrusion in the upper part of the linea alba.

2 thoughts on “A late arrival”