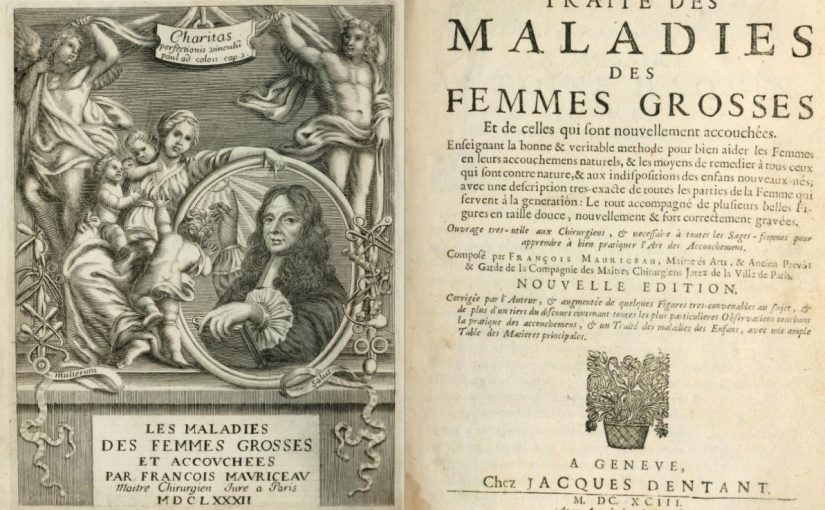 The seventeenth-century French surgeon François Mauriceau was one of the founders of modern obstetrics. Over several decades he studied every aspect of pregnancy, childbirth and the health of newborn babies, attempting to put the discipline on a new theoretically sound and anatomically-informed basis. His masterpiece, published in 1668, is the treatise Des maladies des femmes grosses et accouchées (‘Diseases of pregnancy and childbirth’) – a monumental work which was translated into several European languages and ran to many editions. Another book, not quite as well known but which was still being cited two hundred years after its first publication, is his Observations (1692), a collection of 700 case histories drawn from his vast experience and intended to illustrate the principles expounded in the earlier work. It contains a number of quite remarkable stories, such as this one from Observation 242, devoted to miscarriages and their causes:

On February 14th 1679 I treated a woman who miscarried during the sixth month of pregnancy, fifteen days after she had injured herself by lifting up her arms too far while trying to attach a nail to a tapestry.

Shortly after this apparently trivial incident, Mauriceau’s patient experienced some minor bleeding; although it did not seem serious at the time, she subsequently lost her child. I’m not an expert, but I suspect the miscarriage had some other cause than lifting her arms too high. Nevertheless, the doctor explains the rationale for his conclusion:

The cause of these serious injuries affecting pregnant women who exert themselves by raising their arms is the large muscles responsible for lowering the limbs, which become unwontedly strained in this exertion; they violently compress the sides of the stomach and womb, which partially detach from the back, causing a loss of blood which provokes the abortion.

I doubt many modern obstetricians would agree with this analysis.

We see women so delicate that when pregnant they cannot make the slightest effort without injuring themselves, and without subsequently aborting, as in the case of the woman I have just mentioned; and others, on the other hand, are of great robustness.

To illustrate this point, Mauriceau cites a case from his own experience.

I attended one woman who when seven months pregnant had fallen from a three-storey height. In order to avoid a fire in the house she chose to leave her room through the window rather than be burnt alive; as soon as she felt herself suspended in mid-air from the window ledge, fear made her release her grip. And although this woman was almost at full term, and when she fell landed on paving stones, in the process breaking a bone in her arm and half of those in her wrist, and had injuries all over her body, she still made a full recovery, and then gave birth to a healthy child.

It’s an amazing story; even impossible, you may be thinking. M. Mauriceau is anxious to quell your doubts.

This case, for its rarity, might be thought incredible, if it were not well known to a very large number of people, who were witnesses of this strange accident.