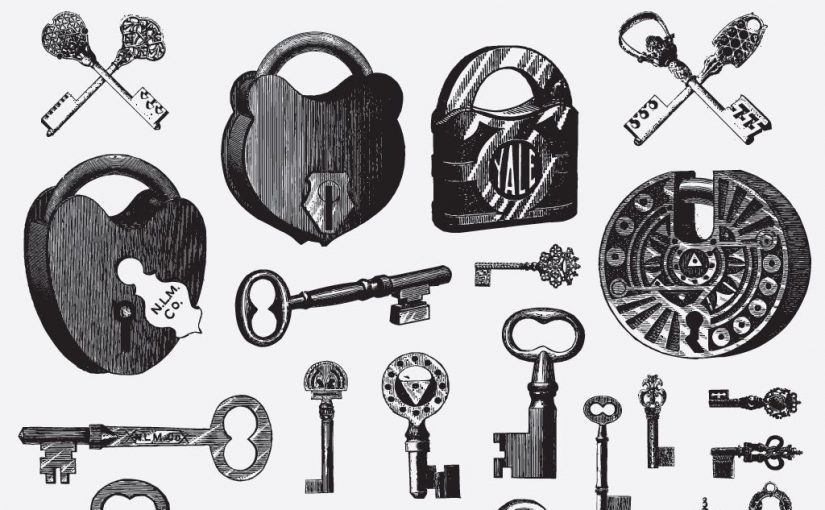 Sir William Fergusson was a leading figure in Victorian medicine. A great and widely respected surgeon, he began his career in Edinburgh in the 1820s before moving to London, and the professorship of surgery at King’s College, in 1840. In very little time he established himself as a pillar of the capital’s medical community, and one of its most successful operators, a particular authority in the treatment of cleft lip and palette. In 1842 he published a textbook, A System of Practical Surgery, which went through several editions on both sides of the Atlantic. A chapter on the surgery of the head and neck includes this remarkable little tale:

A girl about twenty years of age came under the care of Mr. Lizars in the Edinburgh hospital, who was said to have swallowed a small padlock, which she asserted was lodged in her throat.

Another account of this case claims that the padlock, ‘for the purpose of being concealed, was hastily introduced by the patient into her mouth, whence it fell accidentally into the pharynx.’ There aren’t many ways that a padlock can be swallowed by mistake, so maybe this is indeed what happened.

The most careful examination by means of the finger, steel sound, and probang, gave no indication of its actual seat, and only on one occasion, during the different consultations which were held on the subject, was there any evidence that the object could be touched by the instruments introduced for the purpose.

Recovering foreign bodies lodged inside the oesophagus or trachea can be a tricky business even now, but it must have been an absolute nightmare in the nineteenth century, before the advent of X-rays. A sound is an instrument used to open up a stricture or obstruction – the two main types are urethral (used to dilate the urinary vessels) and uterine (for opening the cervix). Probangs were originally used to shift foreign bodies from inside the oesophagus; they were usually made from flexible material with something soft, typically a piece of sponge, at the end.

The sound seemed undoubtedly to indicate the presence of the metallic substance; but upon another trial it was observed to strike against the incisor teeth, and as the point could not again be brought in contact with the padlock, the idea of making an incision in the neck was abandoned for the time, more particularly as there were reasons for supposing that the person was an impostor.

The plot thickens! Making an incision into the neck to remove the object, a procedure known as oesophagotomy, was certainly a last resort. The case is not dated, but it can have taken place no later than 1840 – long before any sort of antiseptic measures were available to prevent infection.

As she, however, still asserted the truth of her first story, she was kept in the house, and some time after, during the night, the house surgeon was suddenly called to her in consequence of a severe fit of vomiting: during an effort he introduced a large pair of forceps into the pharynx, and at once seized the padlock, which he removed without the least difficulty.

And then apologised to his patient for calling her an impostor, one hopes.

Whether it had ever been in the stomach it was impossible for anyone to say; certainly there were no marks of the gastric juice having acted upon it, although three weeks had elapsed from the time when it was said to have been swallowed.

A strange case history. Where had the padlock been for those three weeks? No mention is made of its size, which is a shame as it might offer a further clue. It is not impossible that it was in her oesophagus for all that time, since there are many other cases of surprisingly large objects lodging there for extended periods of time. And one might expect a metal object (almost certainly made from iron, indeed) immersed in stomach acid for three weeks to show obvious signs of corrosion. Were I a betting man I’d wager that the padlock never made it to her stomach, and lodged somewhere in the oesophagus. What do you think? Please leave your answers below…

One thought on “Removed without the least difficulty”