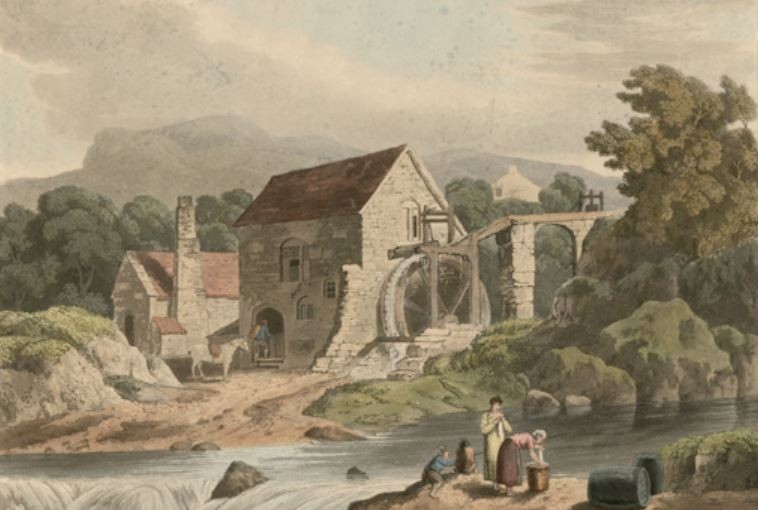 Last week I revealed the dangers of working in the mirror manufacturing trade in 19th-century Bohemia.  Here’s another tale of occupational peril, published in The Western Journal of the Medical and Physical Sciences in 1833.

Mr. J., about twelve weeks since, while standing near the end of the arbor of a heavy grindstone revolving rapidly by water power, had his clothes caught by it and twisted up like a thread upon the spindle. This twisting commenced near the genital organs, and immediately involved them in the operation, in such a manner as to remove every portion of integument and cellular membrane from the penis and upon the pubis, in a circular line from one external ring to the other.

Ouch.  One doesn’t really want to know the details, but I’m going to inflict them on you anyway:

Every particle of the scrotum was torn away, leaving the cremaster muscles and tunicae vaginales completely naked. The right spermatic cord was affected with involuntary twitchings; but the left appeared considerably elongated, and to have sustained considerable injury. Both cords were entirely detached from all connections up to the external rings from which they hung, and a better display of the parts, or clearer dissection, could not have been made by the most expert anatomist.

A lovely way of putting it.

The sensibility of the denuded parts was most intolerable; the gentlest touch produced exquisite suffering.

This will be a surprise to nobody.

The circumference of the injury was well defined resembling more an incised than lacerated wound; it was regular in its outline, extending from two inches above the penis to the perineum, and in depth to the external fascia. A penknife with three blades, which went into the operation, was bent into a circle and the blades broken, showing the great power which well nigh spun his thread of existence to an end. Had not the machine been soon stopped, the penis and both testicles must inevitably have been torn away; as it was, it was a frightful injury, and in its nature, perhaps, without a parallel.

Hold on a second, I haven’t finished wincing.

In this state of things the medical gentlemen of the vicinity were immediately assembled, and from the singularity of the case some embarrassment was experienced in deciding upon the best course to adopt. It was, however, decided that as the left spermatic cord had sustained severe injury, and as its loss would not necessarily cause emasculation, it should be removed. In this trying situation the fortitude of the patient did not forsake him; he entreated that this measure should he adopted, if his safety in any way depended upon it. The operation was easily performed by holding the cord firmly between the thumb and finger and dividing it with a bistoury, and tying a single artery which bled very freely. Upon relaxing the pressure, the spermatic vessels were felt to recede through the fingers; and, as a precautionary measure, a ligature was loosely applied to the remnant of cord to prevent its recession into the abdomen, which, however, did not take place. The wound was then dressed by wrapping the parts in the lightest linen wrung from a liniment composed of equal parts of lime water and of olive oil. This dressing was found exceedingly useful in protecting the denuded surface from irritation, without evaporating. The penis and remaining testicle were suspended in bandages passing over the legs.

In the age before painkillers and anaesthetics, pain was an inescapable part of medicine, and often went unremarked in case reports. From the following description it is clear that this patient was in really dire straits.

Nothing could exceed the sensibility of this wound. The slightest motion, or touch, or drop of urine, would excite intolerable suffering. The treatment was completed by observing the strictest antiphlogistic rules.

Antiphlogistic (derived from ‘phlogiston’, the name of an obsolete theory of combustion) is an antiquated term for ‘anti-inflammatory’. Antiphlogistic treatments were those aimed at reducing inflammation.

The cure went on well enough, but was a serious business for the patient. The moment he went to sleep, he was troubled with erection, which caused excruciating pain. This was not all; an induration of the inferior surface of the penis added chordee to this symptom, and these continued for more than two months. Doubtless this erection was a desirable circumstance for obvious reasons; still it was most tormenting, causing bleedings and short and disturbed sleep.

Chordee refers to an unwanted curving of the penis. Despite this additional symptom the patient got better.

Although the progress of the cure was slow, yet it was wonderful to witness the resources and operations of nature. The testicle, which swung from the external ring, united to the surface of the wound in the perineum; the cavity of this wound was filled by granulations, and covered in part by the contraction of the skin from its edges, and partly skin newly organised, as was the penis (but without prepuce) and anterior surface of the testicle. The testicle is well provided for, being buried and protected in the perineum: the integument now covering the penis is loose and ample, which is to be attributed to the erection, for two months such a source of torment.

Is a happy ending possible in such a ghastly injury? Remarkably, yes:

Mr. J. is a young man in robust health, and submitted with great resolution to all the painful emergencies in which this unfortunate accident placed him; and I have no doubt but he will ultimately be restored to his full procreative powers. This case, too, gives a useful lesson upon the restorative powers of nature; and it appears to me that we do not place reliance enough upon this wonderful provision, and that we too often lay down science to take up the knife.