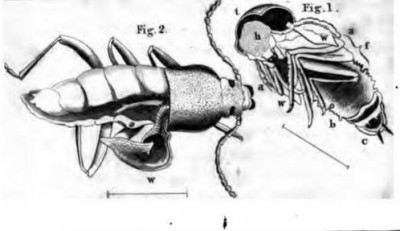 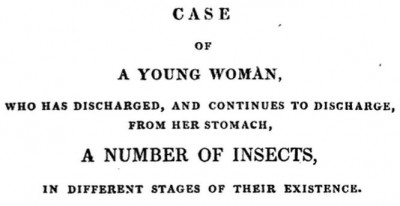 In 1824 the Transactions of the Association of Fellows and Licentiates of the King and Queen’s College of Physicians in Ireland reported an extraordinary case which would continue to be quoted in the medical literature for many decades.  The case was reported in a paper whose lengthy title was abbreviated to the rather snappier ‘Dr Pickells’ case of insects in the stomach’:

The wretched subject of this Paper is Mary Riordan, aged twenty-eight, who, though weakened by long suffering, still retains the appearance of having been originally robust. She has a high degree of nervous sensibility, and is of a melancholic temperament, and religious frame of mind.  Her melancholy may be traced, in the first instance, to the death of her mother, after which, during severe months, she was in the habit of daily visiting her grave. On one of these occasions, overcome by the poignancy of her feelings and fatigue, she was found the following morning lying over the grave in a state of insensibility, having spent there the entire of a rainy winter’s night. She has been for the last six years labouring, at intervals, under vomiting of blood, as also during nearly the same period under occasional convulsions.

After this episode she came under the care of several doctors, but continued to suffer from a variety of distressing symptoms:

During the intervals of the convulsive affections she complained of a variety of symptoms, in particular of head-ache, vertigo, noise in the ears, occasional pain and deafness of the right ear, and great perversion of the senses of sight, taste, and smell. About a month or two before I saw her she laboured under amaurosis, which lasted a fortnight. The loss of sight was complete, and she experienced great pain in attempting to close her eyelids. This affection appeared to have been removed by an ichorous discharge from the ears, which came on during the use of the warm bath, and which was also attended with a mitigation of a number of curious optical illusions, to which she had long been subject.

Her doctors learned that she had some rather strange dietary quirks:

She had been in the daily habit of eating large lumps of chalk, having found it to mitigate the burning sensation in her stomach. Her father and brother, who were coopers, and used large quantities of this substance in their trade, were accustomed, in compliance with her importunities, to provide a regular supply of it each evening. At last, however, they desisted, having become alarmed upon consideration of the enormous quantity which she had consumed. In this exigency, she regularly expended whatever trifle of money she could get in purchasing chalk privately, and those parts of it which were harder than others she contrived to soften by steeping in milk.

Her condition had been so serious that on at least fourteen separate occasions a priest had been called in to give her the last rites.  But nothing could prepare her doctors for what happened next:

On the night immediately preceding the day of the discharge, she had gone to a wake, and remained there a considerable part of the night. The scene before her recalled forcibly the circumstances of her mother’s death, and she at length fancied that in the corpse which lay before her she saw her mother. She was seized at the instant with a violent convulsive paroxysm, during which blood gushed simultaneously out of her mouth, nose, and ears. A quantity of raw spirits, by a facility unfortunately but too characteristic of the lower orders in this place, was in vain poured down her throat in order to recover her.

The following day, to general horror, she threw up an object which appeared to be the larva of a beetle.

I have myself since seen her repeatedly vomit similar larvae, in consequence of emetics… The accompanying matter, consisting principally of blood, mixed with a green fluid, literally teemed, as I have been informed, with similar larvae.

On the eighteenth of April, in the morning succeeding the day on which the event happened, I made the following note.  “Discharged on yesterday from the stomach, with great difficulty, a green thing as long and as thick as one of her fingers, which flew. It had wings, a great many feet, and a turned up tail. It was green.” She saw it distinctly leap, and clap its wings, immediately after having been thrown up. She took it into her hand, and put it into a wine glass, which it almost filled, with paper stuffed over it, in order to confine it. It immediately forced its way, however, out of the glass, and flew, first on a table, and then on the floor. She was now seized with a convulsive paroxysm: upon recovery, she and her aunt, who had just come into the room, searched for it in vain.

A few days later Dr Pickells had to leave town for a while, leaving his patient in the care of a colleague:

During my absence Dr. Herrick reports, that she used almost every second or third day to vomit, in consequence of emetics, a number of larvae, similar to those of the beetle in some instances, (as she and her family say,) to the amount of upwards of thirty at a time, accompanied with large quantities of blood. The term by which she distinguished the pupae was, the “winged ones,” a term, however, it afterwards appeared, under which she included both pupae and perfect insects; the elytta, or wing-cases, which she, naturally enough, supposed to be wings, having given rise to the common appellation.

‘The winged ones’ sounds like the title of a horror film – though the whole scenario has something of an 18-rated movie about it.

On the 20th of October were voided, per anum, under the operation of castor-oil, a

great number of minute larvae, presenting an appearance, from their great number and minuteness, as if hay-seed had been sprinkled on the stools. No specimen, however, was preserved.  December 10th another perfect insect was voided by stool, similar to the former, but smaller: it was alive, was white, had horns, wings, feet, and tail. Unfortunately it was destroyed by her father, having, in a fit of peevishness, thrown it into the fire.

A mode somewhat novel, but which proved effectual in instantaneously cutting short the convulsions, was accidentally discovered, and was afterwards resorted to in several instances with the same success.

Dr Pickells is coy about this ‘novel’ technique, explaining it only in a footnote in Latin.  It appears to have consisted of inserting a finger into the patient’s vagina.  Over the course of several months her symptoms gradually subsided.  But Dr Pickells was determined to find out what these insects were and how they found their way into her body.  So he enlisted the help of a friend:

In the necessary entomological details of the present case, I have had the advantage of the kind assistance of Dr. J. V. Thomson, late surgeon to the 37th Regiment, and F. L. S., who has for some time past been resident in the neighbourhood of this city.

Dr. Thompson is of opinion, that all the “long ones” which he examined, with the exception of seven, belong to the species of beetle called blaps mortisaga; and that the seven belong to the species of beetle called tenebrio molitor, or the meal-worm. Of the larvae of the beetle, I am sure I considerably underrate when I say that, independently of above a hundred evacuated per anum, not less than seven hundred have been thrown up from the stomach at different times since the commencement of my attendance.

Blaps mortisaga is a large insect also known as the Giant Churchyard Beetle.  But this still left unanswered the question of how they found their way into her gut. Dr Pickells wanted to know:

In an anxiety to elicit every circumstance which might tend, in the slightest degree, to develop the mode of introduction of the insects, I once asked her, whether, independently of the chalk, she had ever been in the habit of eating clay. Her answer to this question unfolds a tale which I regret to have to record, as a degrading instance of superstition. When she was about fifteen years of age, it appears that two much-respected and popular clergymen of her persuasion having died, she was told by some old women, that if she would drink daily, during a certain period of time, a portion of water imbued with clay, taken from the graves of these clergymen, she would be secured for ever against both disease and sin. She accordingly walked to Kinsale, a distance of twelve miles, where one of the clergymen was interred, and succeeded in bringing away an apron and pocket-handkerchief full of clay from his grave. To this she added, upon her return, a handkerchief and some mugs full of clay, obtained from the grave of the other clergyman, who was buried in this city. Her practice was, to infuse water from time to time, according to the exigency, in a vessel containing a proportion of clay so collected, the mixture having been always allowed to rest until the grosser particles of clay fell to the bottom.

A local priest eventually discovered that she was drinking this clay-water, and persuaded her to stop.   But Dr Pickells remained puzzled:

The blaps mortisaga, it is well known, inhabits such situations as church-yards. This occurrence, however, happened about twelve years prior to the first discharge of insects; and it seems difficult to reconcile with analogy the supposition of their having so long remained in the system… It may appear more probable to some, that the insects were taken in by the mouth during the night which she passed in the church-yard about eight years ago; the objection, however, of the great interval between their introduction and discharge still recurs, though in a less degree.

Our intrepid doctor admits frankly that he is stumped.  But it’s not a dead loss: he believes he’s witnessed a phenomenon new to medical science.

Thus the interesting fact seems to be established, that the different successive metamorphoses of insects may take place in the human stomach during life. The present is, as far as my inquiries have extended, the first well-authenticated case in which the larvae, pupae, and imago of the same insect have been discharged from the same individual. A further, and a striking feature of the case, consists in the extraordinary number of larvae of different descriptions, evacuated as well by the stomach, as per anum; a number, I believe, unexampled, and which still continues to increase.

Some months later Dr Pickells added an appendix to his original report.  Although he had tried several new treatments, the insects were still appearing:

She has been now, to omit the notice of other larvae, discharging the larvae of blaps, whether from the stomach or per anum, during a period of nearly a year and nine months.

One thought on “The winged ones: insects in the stomach”