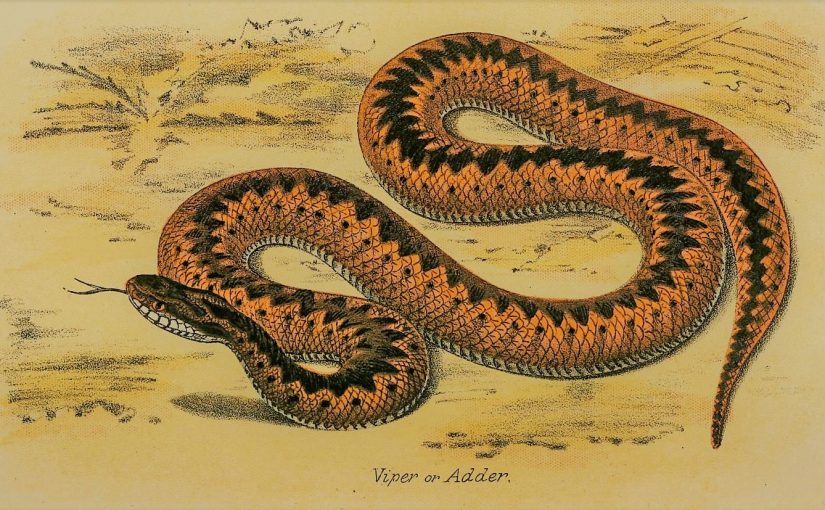 The year is 1840, and The Lancet brings us this snippet of medical news from Germany:

A man who, from his youth, had been accustomed to catch and tame vipers, brought two, on the 24th March, to a shopkeeper. While playing with one of the animals, he put it in his mouth…

I bet you can’t guess what happened next.

…and was immediately bitten by the viper, in consequence of a bystander having pinched its tail.

This was obviously the fault of the bystander, who had interfered with the famously risk-free procedure of putting a venomous snake inside one’s mouth.

The tongue at once became enormously swollen, and during the night the man could hardly breathe. A medical man was sent for next day, and found him in a very dangerous state, the face swollen and anxious; the salivary glands tumefied; the tongue enormously swollen; and the pulse small.

The doctor decided to scarify the patient’s tongue.  This procedure was a mild form of bloodletting, intended to reduce inflammation, and involved making a series of tiny cuts in the skin. But it was unsuccessful: the tongue continued to swell and the patient collapsed ‘in a state of asphyxia’.

The respiration and pulse were now completely suspended; the face became purple, and the neck swelled to such a degree, that its circumference exceeded that of the head.

A dramatic spectacle, but also very worrying. It sounds much like anaphylaxis, a violent allergic reaction.

The operation of tracheotomy was at once had recourse to, and the patient was bled; the blood, at first, flowed slowly, but, after some time, the respiration became more regular, and the tumefaction of the neck was diminished.

Tracheotomy allowed the man to breathe via a hole in his neck, a measure which probably saved his life.

The patient was now put in bed, and a variety of medications were administered. These included ammonium acetate (also known as spirit of Mindererus), intended to reduce fever and inflammation, and nitre (saltpetre), a compound believed to improve the breathing. Sixteen leeches were applied to the neck in the hope of reducing the swelling, and plasters smeared with mustard were placed on the neck and legs. These, known as sinapisms, were intended to promote healing by causing mild irritation elsewhere in the body – a doctrine known as counter-irritation.

He slept during a part of the night, and in the morning found himself something better, although the tongue was still blue and swollen. On the third day after the operation the tongue had nearly recovered its natural state, and on the 19th day the man was dismissed perfectly cured.

Perhaps unsurprisingly, cases of snake bite to the tongue are not exactly numerous in the medical literature. There was one memorable case a few years ago in which a 24-year-old man captured a wild adder he found on a beach and took it home in a cardboard box. The problems began when ‘under heavy influence of alcohol, [he] tried to kiss the adder’, which was about as sensible an idea as it sounds. Like the patient in 1840, he was lucky to survive. He had to be kept on a ventilator for almost a week and very nearly died, even though doctors were able to give him an antivenom within a couple of hours of his being bitten.

If I could impress on my readers only one thing it would be this: kissing venomous snakes is not recommended.

2 thoughts on “The viper’s kiss”