Here’s an intriguing snippet reported by the Paris correspondent of the Lancet in September 1882:

We have now a patient in the Lariboisiere Hospital who has been operated on by Dr. Felizet for the removal of a spoon from the stomach. The patient was a waiter at a café who in a frolic accidentally swallowed a spoon. It was a spoon generally used for mixing toddy or diluted coffee, the bowl of which is about the size of a teaspoon, with a handle adapted for a long tumbler.

One of those long spoons you get in Continental cafés, in fact. Quite a large object to swallow. 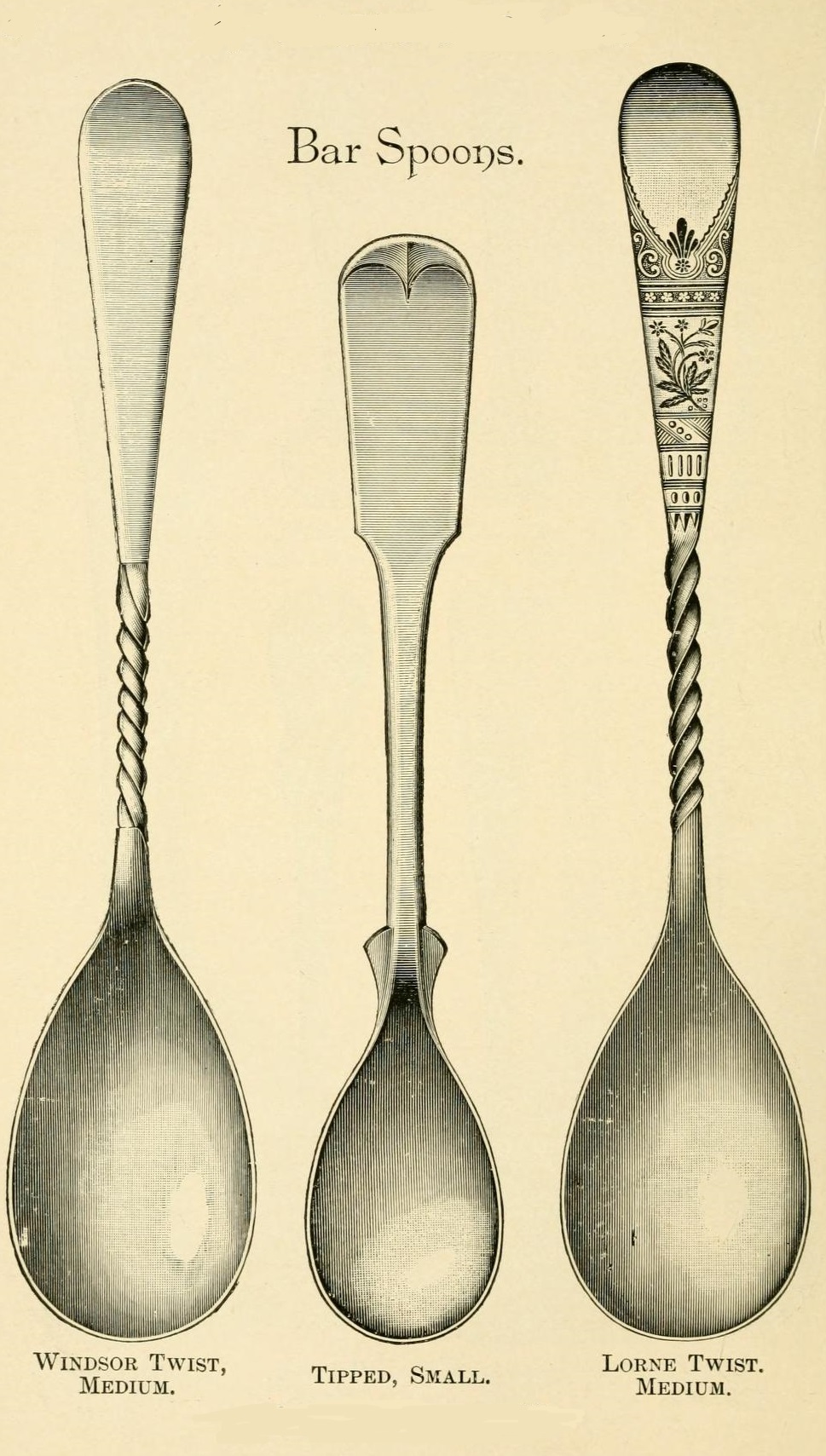 Dr. Felizet at first was in hopes that he would have been able to remove the spoon through the natural passages; but finding this impossible from its position, which was across the stomach, he was obliged to resort to gastrostomy.

Gastrostomy is an operation to make an artificial opening for the stomach. A fairly daunting procedure in 1882.

The patient, according to the latest report, is doing as well as can be expected.

A couple of weeks later the Lancet had an update:

The patient is now convalescent, and I will now complete the account of this case by a description of the operation and the subsequent treatment. Peter Genisca, for such is the name of this spoon-swallower, is a young Swiss of nineteen years of age.

On the night of Sunday, Sept. 10th, he was amusing the customers of the café, where he was employed, by introducing a long spoon, such as is used for stirring coffee when served in glasses, into the oesophagus, pushing it as far down as he could and then withdrawing it.

The young man was apparently the only person who failed to predict what would inevitably – inevitably! – happen next.

The performance was brought to an abrupt ending by the spoon slipping out of his fingers and disappearing down the alimentary canal. The following morning he was seen at the hospital by M. Felizet.

Georges-Marie Felizet, then still in his thirties, later became a celebrated paediatric surgeon. He was a veteran of the Franco-Prussian war, an accomplished swordsman who also published a textbook on fencing.

Palpation revealed the existence of a foreign body, which projected in the left hypochondrium.

The left side of the belly, in other words.

Pressure upon this spot was painful, and caused a pricking sensation below the liver. The patient complained also of a feeling of constriction in the epigastrium, of difficulty of breathing, and of a painful sensation with each movement of the diaphragm. There was a constant flow of saliva and mucus from the mouth. Opium and ice were given to allay the pain, but in spite of this no sleep could be obtained, and bilious vomiting set in. This symptom, together with the patient’s anxiety and suffering, decided M. Felizet to operate.

The surgeon was worried about infection – in particular, the possibility that making an incision into the stomach would allow its contents to escape into the abdominal cavity. He came up with an ingenious plan to ensure that this would not happen:

A small india-rubber tube was introduced through one nostril into the stomach. The outside extremity terminated in a Y-shaped branch, upon one division of which was a funnel, whilst the other was in communication by means of a tube with a recipient containing ether. To begin with, the stomach was washed out by pouring a solution of bicarbonate of soda into the funnel, and then depressing the end of the tube below the level of that organ, so as to act as a syphon.

By flushing the stomach with sodium bicarbonate, a mild disinfectant, before cutting into it, the surgeon hoped to wash away any microorganisms that might cause infection when the organ was opened.

The patient was then put to sleep with chloroform, and the operation began. Dr Felizet made a seven centimetre-long incision on the left side of the abdomen and dissected through the layers beneath. This exposed the peritoneum, the membrane that lines the abdominal cavity. The stomach lay somewhere beneath; but where?

Haemorrhage having been entirely arrested by torsion and ligature, the recipient containing ether was plunged into a vessel of water at 60° Centigrade, and the stomach at once became distended by the vapour, and the peritoneum, being divided upon a director, protruded through the wound.

A clever idea: the ether in the ‘recipient’ (flask) had a boiling point of 35°C, so heating it to beyond this temperature created a large volume of gas, which then inflated the stomach. Similar techniques are still used today in gastrointestinal surgery – although not using ether, which is dangerously flammable.

Ten sutures in all were then made to fix the stomach to the abdominal wall, the ether being allowed to escape, in order to ascertain whether the juxtaposition of the surface was complete.

I think it’s fair to describe this operation as heavy-handed. The surgeon might simply have made an incision in the stomach, removed the spoon and sewn it up again. Instead, he performed an elaborate and unnecessary procedure to attach the stomach to the abdominal wall, creating a semi-permanent opening to the outside world.

One spot appearing defective the stomach was distended again, and another suture inserted. An incision six centimetres in length was then made in the axis of the wound. After the vapour had escaped the stomach was found to be perfectly clean and empty.

Not entirely empty, as it turned out:

The spoon was felt, lying transversely across the stomach with one end in the pylorus and the other in the greater curvature; it was then extracted without difficulty.

The pylorus is the lower part of the stomach, connecting it with the small intestine.

After the operation the patient was kept under the influence of morphia by small hypodermic injections. Tea and rum were given as a drink, with small pieces of ice.

Alcoholic drinks were widely used at this date as a postoperative medication. Champagne, brandy and various types of fortified wine were frequently prescribed. In the US, surgeons were still recommending whiskey after surgery some years into the twentieth century.

Antiseptic dressings were applied. The after-effects of the operation were not serious. There was no fever or tenderness of the abdomen. The most distressing symptom was great thirst, but this was relieved most satisfactorily by enemata of cold water.

The surgeon had saved the patient’s life; but he still had one major inconvenience to put up with.

Notwithstanding the dressings, the liquids swallowed passed through the wound. On the fourteenth day, a little milk was given, but this oozed through the dressings, and was not renewed. On the fifteenth some meat was tried, but caused uneasiness. On the first of October, a considerable portion of the wound had healed, and all that remains is a fistulous opening, closed by a pad. The patient eats meat, vegetables, and pastry.

I find it difficult to understand the surgeon’s thinking. The ‘fistulous opening’ – a communication between the stomach and the outside world – was created deliberately. Did Dr Felizet intend to leave it there permanently, or to repair it at a later date? This is not explained. And alas the patient paid the price. This short update appeared in the Lancet four months later, in February 1883:

Your readers will remember the case of a young waiter of a café, who, about five months ago, had swallowed a spoon, which was removed from the stomach by Dr. Felizet…The young man left the hospital quite well in health, though there remained a small fistulous opening unhealed, and he seemed to be out of all danger, when about a month ago he was seized with pains in the stomach. On examination an abscess was found in the epigastric fistula, which necessitated another operation. Dr. Felizet enlarged the opening, but peritonitis having supervened the patient expired in a few days.

Infection was always going to be a terrible risk in an operation that left a permanent gaping hole in the patient’s abdomen. By 1882 many surgeons had succeeded in removing foreign objects from the stomach by gastrotomy (i.e., making an incision and sewing it up afterwards). As early as 1635, almost 250 years before Dr Felizet’s operation, a surgeon in Holland had succeeded in removing a large knife from the stomach of a patient – and without the benefits of anaesthesia.

So why did Dr Felizet not perform this simpler and safer procedure? The only explanation I can think of is surgical fashion. In the second half of the nineteenth century surgeons were exploring new ways of treating intestinal obstruction and bowel cancer. One operation they started to perform regularly was colostomy, in which an artificial anus was created by bringing part of the large intestine through a new opening in the abdominal wall. A few surgeons had even attempted ileostomy, creating an artificial opening into the small intestine. Doing the same for the stomach would have been very much in keeping with contemporary surgical research – although, in this case, fatal for the unfortunate patient.