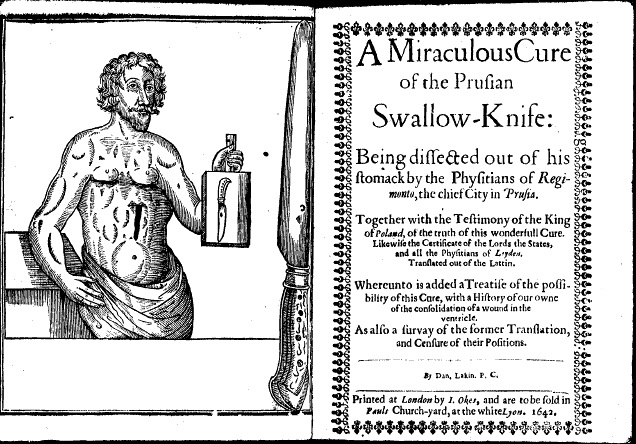 On August 28th 1641 the 21-year-old English diarist John Evelyn visited the great university of Leiden in the Netherlands. He was unimpressed, declaring it ‘nothing extraordinary’, but one building took his fancy:

Among all the rarities of this place, I was much pleased with a sight of their anatomy-school, theater, and repository adjoining, which is well furnished with natural curiosities… Among a great variety of other things, I was shown the knife newly taken out of a drunken Dutchman’s guts, by an incision in his side, after it had slipped from his fingers into his stomach.

This obviously made quite an impression. More than twenty years later Evelyn recorded the following exchange with the future King James II (James VII if you’re Scottish):

I had much discourse with the Duke of York, concerning strange cures he affirmed of a woman who swallowed a whole ear of barley, which worked out at her side. I told him of the KNIFE SWALLOWED and the pins.

No wonder he remembered it: the case of the ‘drunken Dutchman’s guts’ was one of the most extraordinary medical events of the seventeenth century – an operation so daring that two hundred years later, in the era of anaesthetics and aseptic surgery, it would still be regarded as a formidable challenge.

In 1738 the professor of medicine at the University of Königsberg, Daniel Beckher, wrote a detailed book about this case (in Latin) which became a bestseller across much of Europe. 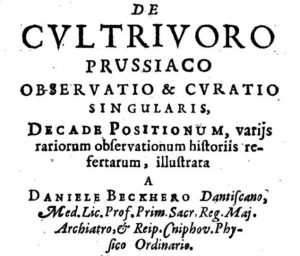 De Cultrivoro Prussiaco Observatio (‘On the knife-eating Prussian’) was translated into English as A Miraculous Cure of the Prussian Swallow Knife, a copy of which eventually found its way into John Evelyn’s library.

Beckher’s account of the case is exhaustive, so I here rely on a precis written by Thomas Barnes for The Edinburgh Philosophical Journal in 1824:

On the morning of the 29th of May 1635, Andrew Grünbeide, a young peasant, feeling sick at stomach from having committed some irregularity in his mode of living, endeavoured to excite vomiting by irritating the fauces with the handle of a knife…

The fauces is the back of the throat. The original text makes clear that Herr Grünbeide had had far too much to drink the previous night, and no doubt many students, past and present, will recognise this method of provoking vomiting. It is not recommended, particularly if you are stupid enough to use a knife.

…but the desired effect not being immediately produced, he thrust it further down, in consequence of which it escaped his hold, and gradually descended into the stomach. The knife-eater was terribly frightened at the time, and continued afterwards much depressed, yet was able to follow his accustomed employment without much inconvenience.

It’s difficult to imagine anybody in his position being anything other than ‘terribly frightened’.

The wretched condition of this afflicted peasant excited much pity, and many physicians and surgeons of great learning and celebrity were consulted respecting him. At a meeting of the Faculty, held on the 25th of June, it was decided, that the abdomen should be opened, an incision made into the stomach, and the knife extracted. Previous to the operation, the patient was to make use of a balsamic oil, called Spanish Balsam, which they supposed would alleviate the pains of the stomach, and facilitate the healing of the wound.

It was decided that the dreaded operation should take place on July 9th. The original account (in its 1642 translation by Daniel Lakin) is vivid:

There met therefore with the Dean of the faculty of Physic, the most excellent physicians, honourable members of the same college, as also the students, masters of our Art, together with the most experienced surgeon and cutter of the stone, Mr Dan. Schwabius my gossip and venerable friend now in Heaven.

It was quite a crowd of eminent medical men in the operating theatre. When they were satisfied that everything was ready, they bowed their heads in prayer to invoke ‘divine assistance and benediction’, and the operation could begin.

The rustic who with an undaunted courage waited the section…

…was bound to a wooden table, and the place being marked out with a coal, the incision was made towards the left side of the hypochondrium some two fingers breadth under the short ribs.

In other words, the incision was made on the upper part of the abdomen, on the patient’s left side.

First the skin and that fleshy pannicle (there was no fat seen) and then the subjected muscles, as also the peritoneum was cut and opened.

‘pannicle’ is an archaic anatomical term meaning a layer of tissue. The peritoneum is the membrane lining the abdominal cavity.

And although the ventricle [stomach] did somewhat sink down, and avoiding our fingers’ ends did not so presently admit of apprehension, and a little staid the operator and standers-by, yet at length attracted and contracted with a small needle crooked, it shewed that the knife was there, which being laid hold on, and the point brought upwards, the ventricle above the same was a little incised, and the knife successfully extracted.

The sense of this passage may not be immediately obvious, so here’s the 19th-century paraphrase:

The stomach subsided and slipped from the fingers, which prevented it from being immediately seized; but it was at length caught hold of with a curved needle, and drawn out of the wound. A small incision was then made into it upon the knife, which was then easily extracted.

In case you’re wondering, yes the patient was still awake. In 1638 he had little alternative, except perhaps passing out with the pain. But far from being in agonies, he was apparently the most enthusiastic spectator:

…which was viewed by all that were standing by, and greatly applauded both by them and the patient himself, who professed that this was the very knife he some few days before had swallowed, but the wound itself when the knife was drawn forth was quickly allayed.

The English translation carries a rather wonderful frontispiece which shows the remarkable size of the knife and the incision from which it was removed.

It would be reasonable to expect some pretty major complications to follow an operation of such gravity, performed two hundred years before surgeons had any idea how to avoid infection. But this patient enjoyed a near-miraculous recovery. The surgeon cleaned the external wound and then stitched it with five sutures; ‘tepid balsam’ was poured on it before a dressing of clay, egg-white and alum was applied.

The following day he was well enough to eat chicken broth, ‘boiled with bitter and astringent herbs’, which doesn’t sound the sort of thing I’d want to eat straight after a stomach operation. After week his doctors declared him out of danger, and he was given rhubarb to aid his digestion.

The same treatment and dressing were continued until the 23rd of July, which was the 14th day after the operation, when the wound had healed, and nothing occurred afterwards worthy of notice. He was restored to the best of health, gradually returned to his ordinary diet and employment, and never afterwards complained of pains in his stomach.

And the knife? It was a fearsome object, described in a later article in the Philosophical Transactions as being six and a half inches long. which was apparently ‘kept in a velvet bag in the King of Prussia’s library.’

The author of that article, Dr Oliver, met a Scottish merchant living in Köningsberg, who told him

that Andrew Grünbeide was his particular friend and acquaintance; that he saw his wound several times when his surgeons dressed him, and was godfather to one or two of his children afterwards.

It’s an amazing story, and a historic operation: gastric surgery would remain a rare and risky undertaking until the twentieth century.  It seems likely that it was only the second successful procedure in which a surgeon had successfully opened the stomach of a living patient; the first had taken place as early as 1602. The surgeon was a barber-surgeon called Florian Mathies; his patient was a professional knife-thrower and yes, he’d swallowed a knife. There really is nothing new under the sun.

One thought on “The case of the drunken Dutchman’s guts”