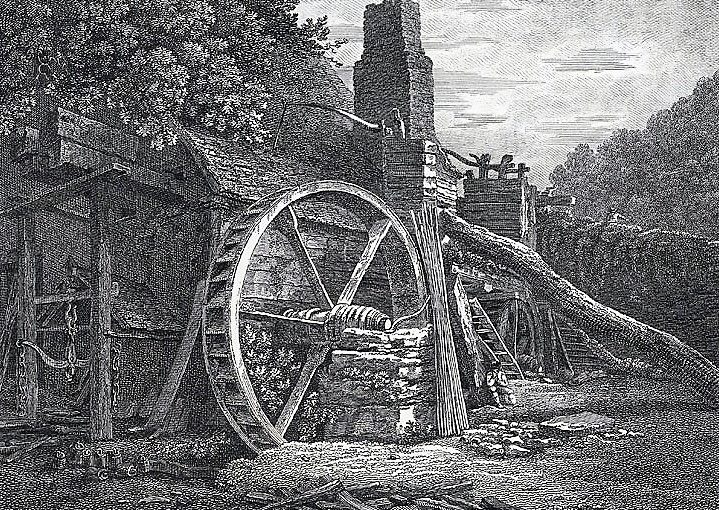 The Medical and Philosophical Commentaries, first published in 1773, was one of the earliest journals intended as a regular digest of the latest in medical scholarship – and the first to survive for any length of time. Its founder Andrew Duncan (the elder) was a professor at the University of Edinburgh, at a time when the city was a world centre of medical education.

This case appeared in volume 5 of the journal, published in 1777. The author James Carmichael, a doctor in the town of Port Glasgow, had studied at Edinburgh where his teachers included William Cullen, a legendary figure of the Scottish Enlightenment. The title speaks for itself:

October 7th 1776, a healthy girl, three years and a half old, was entangled, with an apron pinned about her shoulders, by the spindle of a barley-miln, going at its full career, and twisted round with it with equal velocity.

‘Miln’ is an archaic (possibly Scots?) word for a (water) mill. The poor girl was, it seems, the daughter of a miller.

The father did not perceive her, till her legs struck him behind. He instantly threw the water off the miln; ran down one pair of stairs, and removed the wedge which keeps the miln-stones asunder, before the miln could be fully stopped.

‘Threw the water off the miln’ means that he stopped the mechanism by cutting the water supply to the water wheel driving it.

On getting back, his child was thrown to a considerable distance, was motionless, and the left arm tore from her. She recovered a little, was sensible, and spoke readily.

The miller ran to find a doctor, and returned with Dr Carmichael.

In less than an hour from the accident, I found her, though losing no blood, to all appearance dying. The extremities were cold; pulse very low and tremulous; convulsions over the whole right side of the body and face; symptoms I attributed to loss of blood, as well as to irritation on the system; but I was astonished, when I was told she had not lost a spoonful of blood.

Very surprising. But there is one possible explanation, of which more later.

The left arm was off an inch and a half above the elbow. The stump had a shocking appearance. All the soft parts were mangled and torn, and stripped from the humerus up to the joint, which was in view. Several lacerations went beyond the joint, through the muscles and common integuments. The body of the deltoid muscle was divided up to the clavicle. The pectoral muscle was considerably injured; its tendons were detached from the humerus. A third laceration stretched backwards and downwards, terminating on the inferior costa of the scapula.

Injuries from wind- and watermills were particularly unpleasant, since the machinery moved slowly and with irresistible force, ripping off the soft tissues rather than severing them cleanly. In a similar accident about half a century earlier, a man from the Isle of Dogs in London, Samuel Wood, had lost his arm when it became trapped in the cogs of a windmill.

In this case the little girl’s arm had been traumatically amputated just above the elbow, but the muscles as far up as the collarbones and shoulder blade had been mangled. A horrible mess for a surgeon to sort out.

In this alarming case, no other surgeon at hand, nor any proper assistant, I hesitated to attempt any operation, being afraid the child would expire under my hands. Certain death, however, seemed the consequence of not doing it.

A recurring theme in the history of surgery is the importance of knowing when not to do something. This, on the other hand, was very much an occasion when action was better than standing idle.

I therefore determined to take off the remaining part of the humerus at the joint, and to leave no more of the muscles and skin, than barely sufficient to cover the glenoid cavity, dreading the violent inflammation which would ensue upon parts sustaining so great injury.

The glenoid cavity is an indentation in the scapula which forms a ball and socket joint with the humerus – the shoulder joint, in fact. Amputations at the shoulder are far from straightforward – to give you some idea of the difficulties, one textbook remarks that the muscles holding the joint together ‘include the deltoid, teres major, supraspinatus, infraspinatus, teres minor, subscapularis, trapezius, latissimus dorsi, levator scapulae, rhomboid major, rhomboid minor, serratus anterior, pectoralis minor, subclavius, coracobrachialis, biceps brachii, and triceps brachii’. Seventeen muscles – and that’s just the important ones.

Two arteries in the axilla, which were distinctly felt, were tied.

The axilla is the armpit. The arteries tied off by the surgeon to prevent any further bleeding were probably two branches of the axillary artery, the main blood vessel supplying the arm.

The capsular ligament was then divided some length.

One of three ligaments which stabilise the shoulder joint.

In endeavouring to dislocate the bone, a large artery sprung, which, at the first stitch, was taken up, just at its exit from below the clavicle. No farther interruption happened during the operation.

The child showed no sense of pain. Warm wine was poured over its throat; and, after waiting some time to see if all the blood vessels were secured, the wound was dressed in the usual way.

It sounds as if the poor child’s body was flooded with adrenaline (epinephrine, if you’re reading this in north America). So effective is the body’s inbuilt reaction to severe trauma that in the aftermath of really serious injuries, patients sometimes report that they are in no pain at all (the effect soon wears off, alas).

Unfortunately the traumatic amputation was not her only injury.

The child’s right leg had struck against the hopper, a large wooden box, and knocked it to a distance, by which both bones were fractured, with large contusion. The eighteen-tailed bandage, with long splints, were applied.

According to a contemporary surgical textbook, the ‘eighteen-tailed bandage’ consisted of a strip of linen, ‘three inches wide and as long as the limb, to which are stitched crosswise, eighteen or more strips of an equal width.’ These strips could be wrapped around splints to secure the limb so that the bones would set in alignment – not dissimilar to what a doctor  might do today.

The convulsions abated, and went entirely off in four hours. The symptomatic fever was milder than could have been expected. The wound digested well. The cure was completed in little more than two months, the child enjoying the perfect use of all its senses.

This is a pretty remarkable outcome, given the seriousness of the injury. Mr Carmichael subsequently asked to see the watermill in action so that he could get a sense of how it was inflicted, and was shocked by the sheer power involved. He calculated that the main spindle, the driveshaft in which the girl’s clothes had become entangled, turned at a rate of 140 rpm – more than two full rotations per second. Assuming that the spindle was a couple of metres in diameter, she could easily have been flung off it at a velocity in excess of 45 kph (25 mph).

The aspect of the incident that most surprised the doctor was the lack of bleeding. Intriguingly, this was also a feature of the case of Samuel Wood, the miller who lost his arm to a windmill.

The explanation probably lies in the mechanism of injury – the fact that the limbs were ripped away rather than cleanly severed as if by a blade. Blood vessels (at least, in the younger patient) are fairly elastic and can be stretched quite significantly before they tear. In Samuel Wood’s case the artery was severed several inches above the level of the surrounding tissues, which then formed a natural tourniquet around it, compressing the end and preventing massive haemorrhage.  Dr Carmichael also reported that the artery was deep inside the wound – a fact that probably saved this little girl’s life. 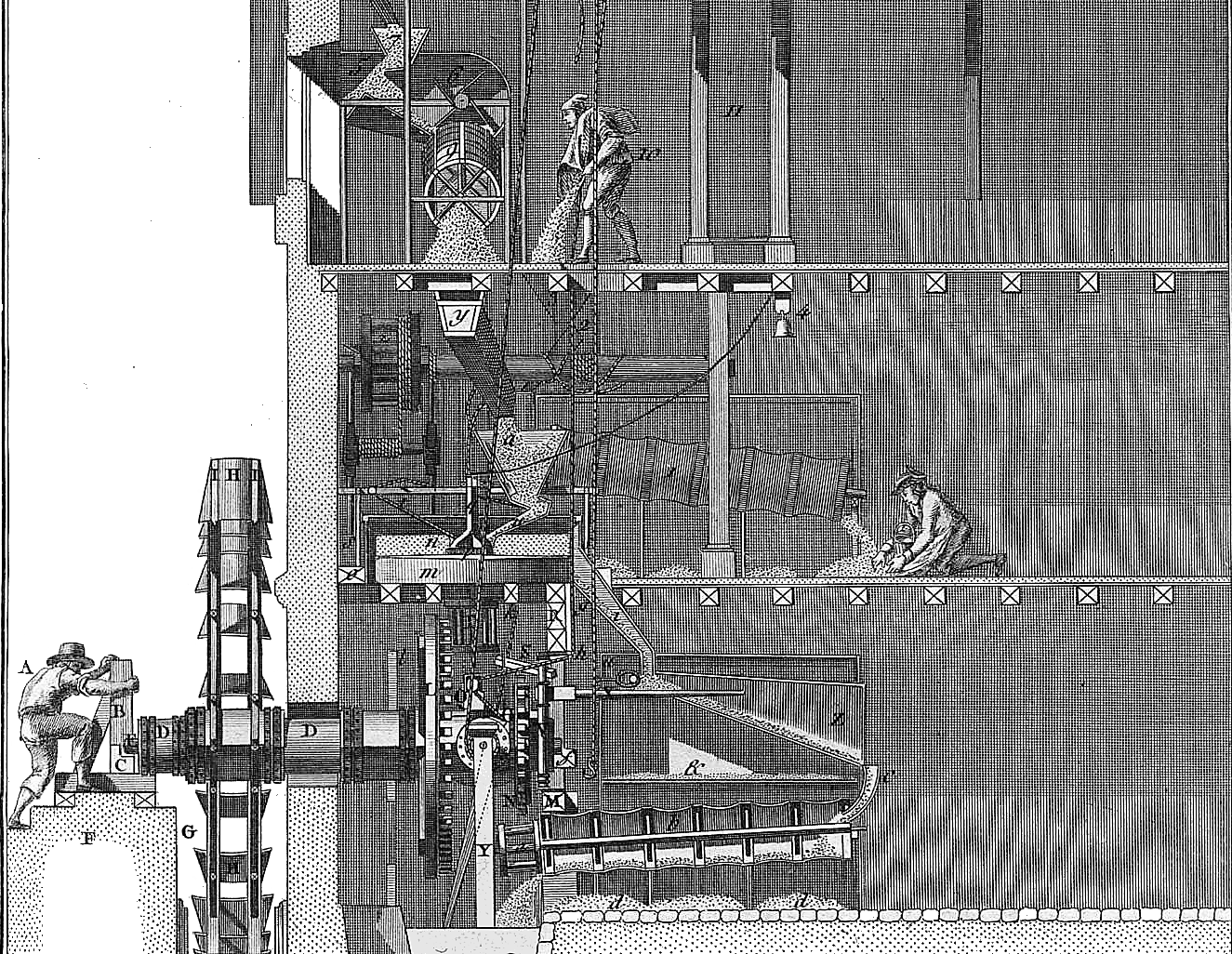