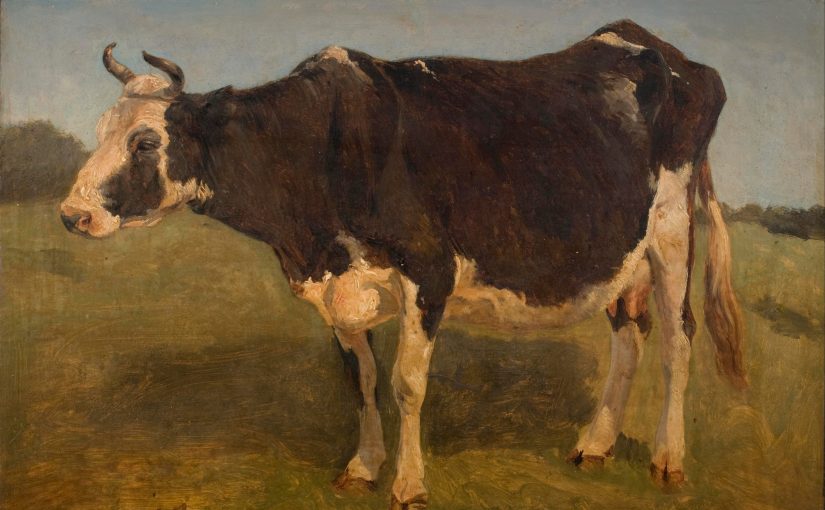 In 1852 the editor of the North American Lancet, Dr Horace Nelson, reported an unfortunate turn of events. His prose can best be described as florid:

In the morning of one of the many days, with which we have been lately visited, when the thermometer ran down in the neighborhood of a baker’s dozen below 0, an individual retired to the leeward of a barn for the purpose of evacuating the bowels.

Edited for brevity: on a cold morning a man defecated behind a barn.

After a hasty survey of the premises, he lighted upon a cow’s head (by the way, it was that of a dead one), and while in deep reflection upon the physiological operation he was then engaged in, accidentally slipped his footing and fell upon the horn, which was thrust up the rectum, broke, and became securely lodged beyond the sphincter.

Like all ‘foreign object in rectum’ stories, this one should be treated with a fair degree of scepticism.

The case being rather a novel one, and withal of a delicate nature, it was deemed prudent not to commit it to the care of old women, but to call in our friend, Dr. Fulton, of Beekmantown.

The ‘old women’ being the local midwife, typically an older woman with knowledge of folk medicine, who might have taken on minor medical emergencies for which a doctor was deemed unnecessary. This was a hangover from the ancient tradition of ‘wise women’ which was particularly important in the Middle Ages.

Literally, ‘by force and arms’: a legal term referring to a type of trespass accompanied by violence.

…and was accordingly proceeding to put his intention into operation, when the patient strongly objected, relying upon castor oil. But our friend doubting the efficiency of the oil in this species of constipation, and having more faith in a strong arm and good forceps, finally prevailed upon the patient to submit to the operation. With very great difficulty the horn was extracted, and measured a trifle less than five inches in length.

And definitely got there by accident. Oh yes.

One thought on “The horn of a dilemma”