In the month of February, 1791, several persons in Philadelphia were seized, in about three hours after dining upon pheasants, with giddiness, violent flushing of heat and cold in the face and head, sickness at stomach, and repeated vomiting.

Some of the afflicted Philadelphians became delirious, or lost the power of speech.  Some recovered after taking emetics to flush out the toxin; others died.  The deceased included some of the city’s leading citizens:

The late George Bryan, one of the judges of the supreme court of Pennsylvania, dined, with Mrs. Bryan, upon roasted pheasants; and after walking out two squares, called at the house of a friend, where he drank a draught of cyder.  He was soon afterwards informed of the sudden indisposition of Mrs. Bryan, and ran home in great haste.  Being upwards of 60 years old, short, and of a clumsy build, the exertion to his system was immense; and he had no sooner arrived home, and beheld Mrs. Bryan in the alarming situation described, than he fell upon the floor, apparently in an apoplectic state, which, in the course of a few days, proved fatal. Mrs. Bryan, after being very ill, recovered.

Dr Mease encountered several other patients who had fallen ill within a couple of hours of dining on pheasant.  What could be the cause?

I would observe, that in the winter and early in the spring, these birds live chiefly upon buds of trees, and particularly upon those of the laurel, which is one of the few shrubs that preserves its verdure throughout the winter, and, from many melancholy proofs, is known to be highly poisonous.  It is not improbable, therefore, that the noxious quality of the laurel may have been communicated sufficiently strong to the pheasants to produce the effects described.

Dr Mease points out that the case is not entirely without parallel:

Fishes, it is well known in the West-Indies, are sometimes highly poisonous, although in the taste or smell there may be nothing indicative of a noxious quality; and so powerful is the poison, that a gentleman informed me he has seen a person at dinner fall off his chair and expire, in St. Domingo, two minutes after having swallowed a morsel of a yellow sprat.

Remind me never to order the yellow sprat when on holiday in St Domingo.

The London mutton is known to taste strong of turnips, with which the sheep prepared for market are chiefly fed.  Dr. Rush informed me, that when at the college of Princeton, almost the whole of the students were severely purged by dining on wild pigeons, which had fed upon the berries of phytolacca, or poke.

One imagines that outsiders gave the Princeton campus a wide berth during this dismal period.  But what of the pheasants?  Should Philadelphians give them up?  Good news for lovers of game: Dr Mease believes that the effects of the toxin are suppressed by combining it with other foods or, best of all, wine.  But discretion is still called for:

These facts are fully sufficient to shew, that though the pheasant has commonly been esteemed an harmless bird, they ought to be eaten with caution; and suggest the propriety of a rule in prescribing them as an article of diet: for, as they are generally esteemed a great delicacy, and very light food, they may be wished for by convalescents; and, as their stomachs are in too highly excitable state to take wine or any other food to counteract their bad quality, it will be right to debar them from these birds, and to substitute in their place other articles of a less suspicious nature, and of easy digestion, as rabbit, partridge, or chicken. 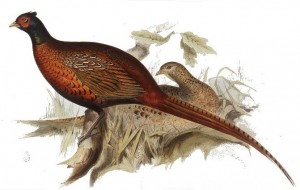