My jaw hit the floor – in a metaphorical, not a literal, sense, although the latter circumstance would itself be worthy of an entry on this blog – when I came across this little story. It concerns a case reported by Paul Broca, a French physician who played a key role in the early development of neuroscience, since he was the first scientist to prove a connection between a specific anatomical area of the brain and its function. This report was published by The Lancet in 1879:

A very curious specimen was recently shown to the Académie de Medecine by M. Broca. It was an enormous sequestrum, consisting of the two parietal bones with portions of the frontal and occipital bones.

A sequestrum is a piece of dead bone which has been sloughed off. This particular example was remarkable, since the parietal bones make up the greater part of the top and back of the skull. The diagram below gives some idea of the extent of the bone loss involved. 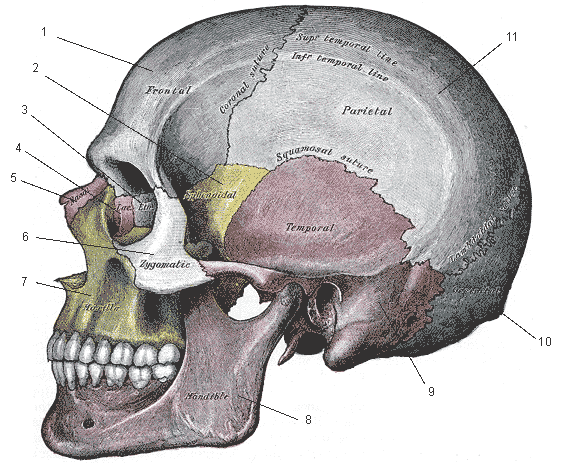 You’d think the patient could not possibly have survived; but – incredibly – you’d be wrong.

The remarkable circumstance is that the patient from whom it came is still alive, and it is now two and a half years since it came away. He is a boy aged eleven, who has always presented a peculiar and even pathological profoundness of sleep, so that in the night he could not be aroused by either noises or blows.

This sounds… atypical. One wonders whether it was indeed a symptom of some underlying neurological problem.

One evening he was left alone in the house by his parents, and was found, on their return, lying on the floor with his head in the fire and fast asleep.

In an already strange case report, this is perhaps the strangest detail. Imagine being so deeply asleep that not even having your head in a fire would wake you up!

His cap had taken fire, and burned slowly, together with his hair. How deeply the fire had penetrated could not be ascertained, but his scalp presented an enormous burn. He was put to bed, still asleep.

Did they treat the burn? Apparently not. Maybe the parents assumed that since he had not woken up, the boy had not been injured. Miraculously, he appeared unaffected – at least, at first.

Next morning the lad woke up, as usual, and went on to the mountains to look after the sheep, as if nothing had happened, and from that time, three years ago, he has continued to do so every day. Six weeks after the burn a large slough separated, and exposed the cranial vault, and the boy expressed much satisfaction at the result, since it enabled him to carry a bundle of sticks on his head without being hurt by the thorns.

That’s right: the boy’s skull was now exposed to the elements, but his only reaction was delight that he could now carry stuff around more easily. That’s what you call looking on the bright side. But things were about to get even worse.

Six months later an enormous piece of bone came off, of which the specimen exhibited by M. Broca was only a portion.

Astonishing. The surface of the boy’s brain was now entirely unprotected. This was now a critical situation, since even minor physical contact might have caused a fatal injury – not to mention the danger of infection.

There resulted a huge wound, which was in full granulation when the priest of the district (to whom the profession is indebted for the specimen) first saw the boy, a year after the accident. The only dressing employed was oiled linen placed under his cap.

In much of Europe at this date, doctors and surgeons were employing antiseptics to prevent infection. But the occupation of this boy (shepherd) suggests that he lived in a remote rural community where such innovations were yet to penetrate. No mention is made of his seeing a doctor, so it is probable that he was treated at home. But the simple dressing appears to have done its job.

In one of the rare visits paid to the boy by the priest, the latter felt pulsations at two points, synchronous with those of the pulse; at his next visit, two years after the accident, these were no longer perceptible. Hence, probably, the brain had been exposed and gradually covered with new bone.

Here we reach what are, for me, murky waters. The body’s ability to repair itself is legendary, and broken bones often heal perfectly. But is it really possible that such a large area of the cranium could be regenerated once lost? It sounds unlikely to me, but I’m out of my depth. If you’re an expert, please do leave an opinion in the comments below.

It is now three years since the accident, and the wound is still imperfectly cicatrised, although the continuance of the process leads to the expectation that it will ultimately be complete.

It’s a remarkable tale, but I’d love to know how accurately it was reported. This case report was widely reproduced in 1879 and 1880. One periodical that reprinted it was The Phrenological Journal, the leading publication devoted to the Victorian discipline of phrenology. Phrenologists believed that the shape of a person’s skull gave some indication of the relative size of the different parts of the brain, allowing the practitioner to infer details about the individual’s character and moral qualities. By the late 1870s this was widely discredited as a pseudoscience, but it still had its devotees. This case was naturally of great interest to phrenologists. The journal prefaced its report with this short statement:

Can a man have two skulls? This question has hitherto been answered in the negative, but a remarkable occurrence is related in the London Lancet, which seems to admonish us to review our data in cranial anatomy.

It seems safe to assume that a man (or woman) cannot have two skulls, but if this case report is to believed it may be possible to grow a new one.

One thought on “The boy with two skulls”