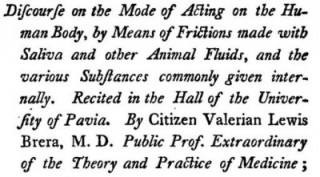 The University of Pavia in northern Italy is one of the oldest in the world, founded in 1361.  It has a distinguished history of experimental scientific research: Alessandro Volta, the pioneer of electrochemistry, was professor there for forty years beginning in 1779.

While Volta was working on his voltaic pile – the first electric battery – his colleagues in the medical faculty were also producing world-leading research. Alas, much of it has not lasted.  An article in the Annals of Medicine for the Year 1797 reports a strange therapeutic regime advocated by Dr Brera, Pavia’s professor of medicine:

This new method of exhibiting remedies, first proposed by Dr Chiarenti of Florence, and afterwards extended by Dr Brera of Pavia, has excited too much attention in Italy and in France, to permit us to leave it unnoticed, however little we may be disposed to coincide with its supporters in their opinion of its vast utility, and expectations of the benefits to be derived from it.

Not exactly a ringing editorial endorsement.

Dr Chiarenti…recommended the gastric juice as an excellent remedy in diseases originating from debility of the stomach.

Making a patient ingest the stomach acid of another person (or animal, as it turns out) is certainly a brave clinical decision.

In giving opium at the same time, he found that it often occasioned much uneasiness and vomiting. This he ascribed to its remaining on the stomach undigested, from the vitiated gastric fluid not acting on it; and led him to reflect on the reasons why opium, administered externally, had so little action. In conformity with his theory, he explained this, by supposing that the opium had not undergone that change which is necessary for its action; and he determined to bring his opinion to the test of experiment.  An occasion soon offered. A woman, afflicted with violent pains, refusing to take opium by the mouth, was a fit subject for commencing his trials. He mixed three grains of pure opium with two scruples of the gastric juice of a crow.

Why a crow? This is not explained.

It soon emitted a strong and penetrating smell, which diminished gradually. In half an hour, the opium was perfectly dissolved; but it was permitted to remain twenty-four hours. It was then mixed with simple ointment, and rubbed on the backs of the feet.  In an hour, the pains were entirely gone; and, never returning, the woman remained cured.

Similar successful trials being made with opium, squills,

Maritime squill (Drimia maritima) is a common plant around the Mediterranean and much used in medicine since ancient times. 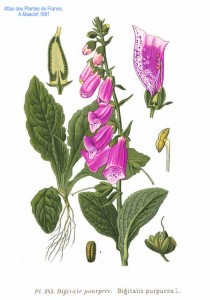 Foxglove (digitalis) was first used to treat heart conditions in the 1780s and is still prescribed today: its usefulness was first described by the English physician William Withering.

our author was induced to repeat them, in the clinical ward under his care. By the difficulty of procuring a sufficient quantity of the gastric fluid, to enable him to carry his experiments the length he wished, he was led, by analogy, to substitute in its place saliva; and the result answered his expectations.

To check that it really was the saliva that had the effect, Dr Brera also prepared ointments made from squills, foxglove and opium while omitting the saliva.  These ointments had no effect.  And a second researcher confirmed his findings:

For some reason this therapeutic regime never caught on.

One thought on “Saliva and crow’s vomit”