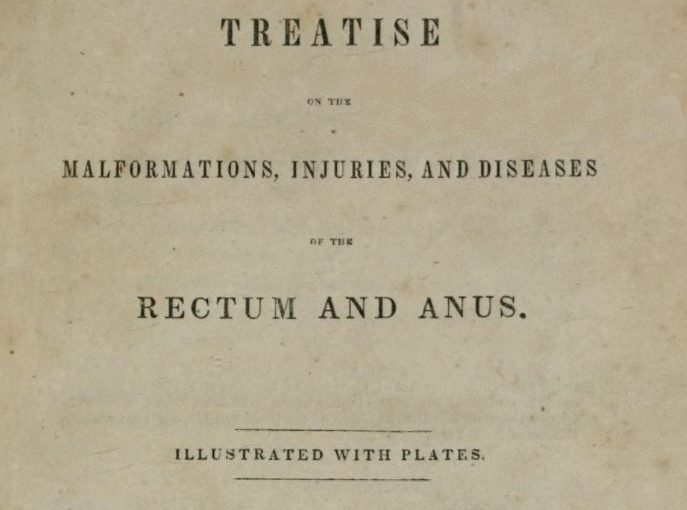 Today’s dose of medical mishap is excerpted from an influential textbook published in 1837 by George Bushe, a surgeon who died at the age of 39 and about whom little is known. Born and trained in Ireland, he emigrated to the US in his twenties and became a lecturer at Rutgers Medical School in New York. When the institution was dissolved in 1830 he went into private practice, and in his spare time produced the work by which he is now principally remembered. His Treatise on the Malformations, Injuries, and Diseases of the Rectum was quickly recognised as learned and comprehensive, and was still regarded as the standard work in Europe and the US several decades later.

As well as drawing on his own experience, Bushe cites dozens of earlier writers, reflecting his own impressive knowledge of the literature. The chapter entitled ‘Foreign objects in the rectum’ gives some idea of his wide reading.

pins, nails, fruit stones, coins, small bones, &c., taken in by the mouth; or pieces of wood, cork, meat, bone, horn, ivory and metal, pots, cups, bottles, ferrules, rings and the like, forced into the anus, either completely or incompletely, sometimes by the individual himself, with a view to obviate costiveness, or in consequence of a perverted imagination; but more commonly by wicked persons, who generally take advantage of the inebriated state of their intended victim.

But how is one to remove such an item? He has a few useful tips:

If the foreign body should consist of inflexible solid animal or vegetable substance, it may be found advantageous to fix it with the fore-finger of the left hand, while we bore a hole in and extract it with a gimlet. Should it be hollow or brittle, an intelligent boy can best withdraw it by the hand well oiled and cautiously introduced into the rectum.

An interesting idea, but how on earth does one persuade an ‘intelligent boy’ to do such a thing? And how is the boy recruited in the first place? Some surgeons might have had an apprentice hanging around, I suppose, but were others expected to recruit some unsuspecting urchin from the street?  The mind boggles.

Nolet, surgeon to the King of France and Marine Hospital at Brest, relates the following curious case: A monk wishing to get rid of a violent colic, introduced into the rectum a bottle of Hungary water, (these bottles are generally long), through the cork of which, he had made a small opening to permit the fluid to flow into the intestine.

These monks, eh? Hungary water was an early alcohol-based perfume – used not just on the face and body, but internally as a medicinal remedy.

In his anxiety to perform the operation well, he pushed the bottle so far that it completely entered into the gut. He could neither go to stool nor receive a lavement. A sage femme failed to insert her hand…

‘Sage-femme’ is the French term for a midwife – though the derivation of the phrase (‘wise woman’) reflects an older tradition of medicine in which older women played an important role in communities, assisting with childbirth and performing certain other minor medical procedures.

…the forceps and speculum were tried in vain; however, a boy, from eight to nine years of age, succeeded in introducing his hand and removed the bottle.

What a hero! I hope he was suitably rewarded. Bushe goes on to give the details of a rather more, ahem, tricky case:

Thiandiere details the case of a man aged twenty-two, who, with a view to overcome costiveness, introduced a forked stick into the rectum.

This approach to treating one’s own constipation is not recommended. For reasons that should soon become clear.

This stick was five inches long; one prong was an inch and a half longer than the other, and they were separated to the extent of two inches, each prong being about four lines in diameter, and the stem formed by their union half an inch. He inserted the or stem first, and when the short prong had entered the bowel, he endeavoured, by dragging on the long one, to force out the indurated feces.

In this ingenious essay it is unnecessary to say that he failed completely; the pain being very severe, he ceased his manipulations, and finding it impossible to withdraw the fork, he forced the long prong completely within the anus, with the extraordinary idea that it would be consumed with the food.

By now it should be painfully apparent that the patient was not the sharpest knife in the drawer.

Fearful to divulge the nature of his case, he bore his sufferings in solitude and despair, until the abdominal pain and difficulty in urinating led him to seek the aid of Thiandidre, who on making an examination soon discovered the foreign body, but it was so high up that he could scarcely touch it. He endeavoured, but in vain, to extract it with a forceps passed through a speculum. The happy idea then struck him of introducing his hand, which, after having washed out the rectum, he insinuated finger by finger.

Oh the glamour of being a surgeon!

Conducted by the long branch, he succeeded in reaching the bifurcation of the stick, and disengaged it with difficulty from a fold of the mucous membrane, in which it had become entangled, then compressing the prongs together, he safely removed it.

As a final bonus, here’s a useful observation from a couple of pages later in the chapter:

I may mention that leeches, in attempts to apply them to the anus, may make their way into the rectum. They will, however, be readily expelled by injecting an infusion of tobacco, or a solution of salt.

This prompts what may be the best footnote I’ve read this year:

Zacutus Lusitanus records a case in which a leech, about to be applied to a hemorrhoid, made its way into the rectum. He injected onion juice into this intestine, and the leech was soon discharged, almost dead. He recommends injections of ox gall, or castor, in similar cases.

I’ll be sure to bear this helpful tip in mind. 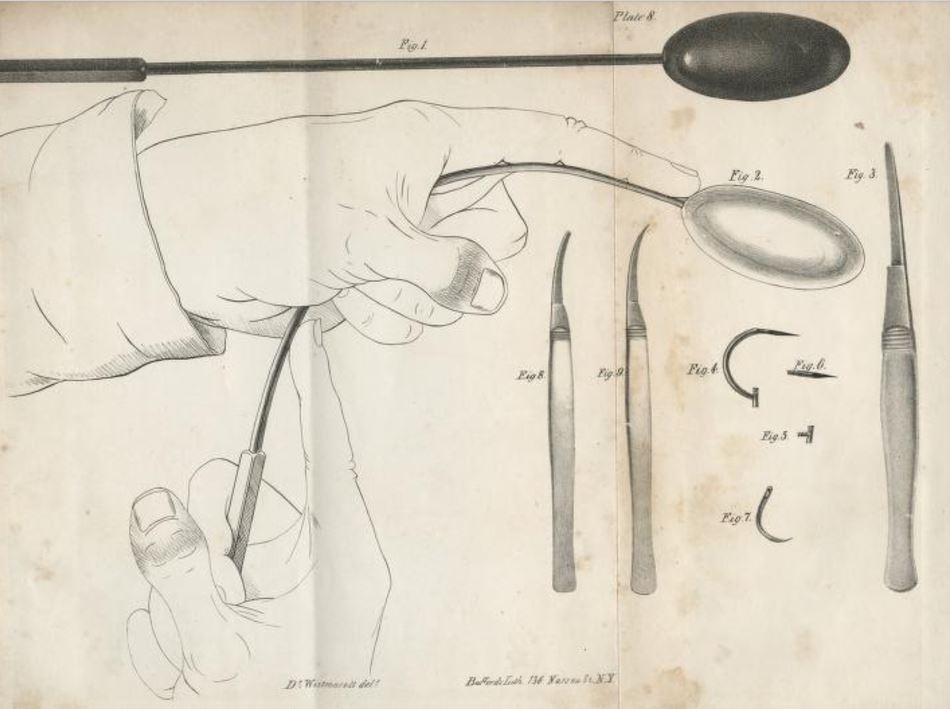