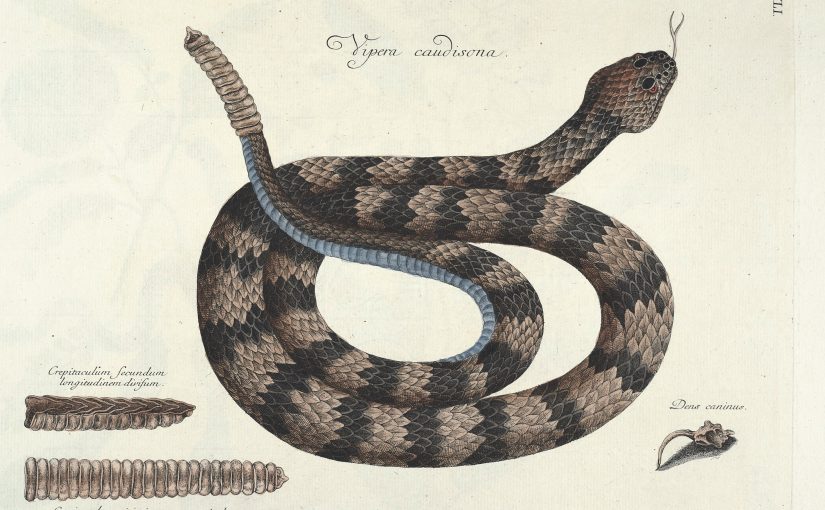 This strange little tale appeared in various literary and medical journals in 1806. This version is taken from The Medical and Physical Journal, which appears to have been one of the first to publish it. It is a salacious snippet rather than a case report, and some contemporaries read it with scepticism: one leading doctor quoted it in an article about animal venoms but noted that ‘I know not whether [it] be authentic or fabulous’.

The text supposedly comes from a letter written by a Dr Barstow of Wilkesbarre, Pennsylvania, to his friend Dr J.R. Coxe (an expert on pharmacology and later professor at the University of Pennsylvania):

In the summer of 1801, Mrs. Alfred Beeman, of Luzerne county, in Pennsylvania, was bitten by a rattlesnake. She was then in the fourth or fifth month of her pregnancy. Notwithstanding the alarming symptoms commonly attending the bite of that animal, Mrs. Beeman recovered, and was delivered without accident at the usual time.

Today the availability of an antivenom has made death from rattlesnake bites a rare event. With modern medical care, in fact, mortality is no higher for pregnant women than for any other group, but that was almost certainly not the case two centuries ago. Rattlesnake venom damages red blood cells and other tissues, and might easily have proved harmful to both mother and foetus.

The child seemed healthy; but no sooner did it begin to suck, than it turned quite black like the snake, swelled considerably, and soon died.

A ghastly event. But something doesn’t ring true about this sentence: would a doctor really write such an imprecise description of such a sudden and unexpected death? I find it curious that there is no attempt to investigate further. There is no mention made of an autopsy, or even of a possible cause of death – although the rest of the article does hint at one.

A puppy was then procured to draw the breast.

Er, what? To the modern reader this seems a surreal turn of events, but in early nineteenth-century America it was quite common for a woman to suckle an animal; indeed, the practice has been documented in many different cultures all over the world. In Western medicine it was believed to aid breastfeeding by promoting the production of milk. William Potts Dewees, a celebrated physician who published the first American manual of paediatrics, A Treatise on the Physical and Medical Treatment of Children (1825), wrote that

the patient should begin to prepare these parts some time previous to labour, by the application of a young, but sufficiently strong puppy to the breasts, immediately after the seventh month of pregnancy.

Dewees suggests that as a result of this puppy-suckling, ‘the nipples become familiar to the drawing of the breasts; the skin of them becomes hardened,… [and] the milk is more easily and regularly formed.’

But back to Mrs Beeman. She had been advised to suckle a puppy for slightly different reasons: although her child had died, her breasts were continuing to produce milk. To prevent them becoming uncomfortably swollen or inflamed, it was necessary to express the milk somehow. The puppy was intended as a gentle means of doing this. But things did not go according to plan:

The animal died in two days, with the same symptoms.

The ‘same symptoms’ meaning that it turned black, became swollen and then expired. The article never makes this explicit, but the suggestion is that the rattlesnake venom had in some way rendered the mother’s milk toxic.

A lamb was next tried; and then a dog, and three other lambs successively, which all shared the fate of the child.

Can this really be true? We now have no fewer than six animals killed by suckling! After such a run of bad luck you’d think that the woman and her medical attendants might suggest another less risky way of getting rid of the surplus milk, but for some reason they persisted.

A third dog was then procured; it was attacked with slight symptoms of disease, but survived. The mother continued in good health.

That’s something, at any rate. Two years later Mrs Beeman gave birth to another child – this time without any emergencies during pregnancy. Naturally enough, she was worried about breastfeeding her baby:

Apprehensive of losing it like the former, she sent for Dr. Barstow, who in consequence of the long interval which had taken place since the bite, and the recovery of the last dog which had sucked her, prevailed upon her to suckle her child, which was attended with no ill consequence whatever.

All’s well that ends well. But what had happened? Although it is not articulated, the implication of the article is that the woman’s milk had been tainted by the rattlesnake venom. It is certainly possible for toxins to be communicated to an infant by breastfeeding – hence the fact that certain drugs are not suitable for nursing mothers. But Mrs Beeman was bitten ‘in the fourth or fifth month’ of pregnancy: even if the venom had affected her milk, it seems most unlikely that there would be any lingering toxicity four months later.

So might there have been another cause? One idea that crossed my mind was ergot poisoning. When rye or wheat are kept in damp conditions they can be infected by a fungus (usually Claviceps purpurea) which produces a highly toxic chemical, ergotamine. One effect it has is to restrict blood flow to the extremities, causing gangrene: typically the flesh goes black as the tissue dies. Crucially, ergotamine may be transmitted to an infant via breast milk.

Ergot poisoning is an intriguing hypothesis, but there are still problems with it. There is no indication that Mrs Beeman or anybody else in the area was suffering from ergot poisoning, and if she had enough of the toxin in her breast milk to poison an infant and six animals you’d expect her at least to be showing some symptoms.

But is the case ‘authentic or fabulous’; did any of this actually happen? The jury’s still out, but it is at least worth noting that contemporary records confirm that Mrs Beeman was a real person: in 1801 a man called Alfred Beeman married a woman called Alice in the township of Braintrim, Luzerne County, Pennsylvania – and two years later she gave birth to her eldest surviving child. But what happened to her from a medical point of view, at any rate, remains shrouded in mystery. If you have any idea what – if anything! – might have been going on here, please feel free to leave a comment.