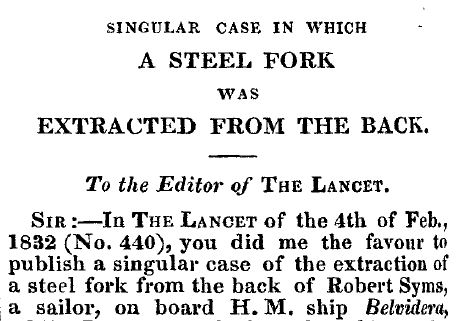 In 1832 a surgeon serving aboard a British Navy vessel in the Mediterranean, David Burnes, sent an unusual case history to The Lancet. Five years later he wrote to the journal again, offering an update to this ‘singular case’. Here’s the complete story:

Robert Sims, aged 23, was entered on the sick list of HMS Belvidera, about the middle of June, 1831, complaining of pain at the inferior angle of the right scapula, close to the base of which was a small phlegmon, as I then considered it, in the early stage of suppuration.

The meaning of the word ‘phlegmon’ has changed somewhat since the early nineteenth century, but here it means a spreading area of inflammation containing pus – almost certainly caused by an infection. This example was above the right shoulder blade.

On the 19th of June I opened the “boil”, and ordered poultices to be applied, thinking it would heal kindly in a few days. On the 23rd, however, on probing the wound, I felt what I at first thought was the edge of the scapula, but, on more minute examination, something black and shining was seen in the wound. On the 24th, it being evident that there was some foreign body in the wound, the opening was enlarged directly upwards, and a piece of steel, about the thickness of a common ramrod, presented itself, but resisted strongly any efforts to extract it.

An unexpected complication. The surgeon decided against extracting the metal object straight away, on the grounds that it would cause a great deal of pain. Instead he decided to pull it out gradually, giving it a gentle pull with the forceps every day. But one thing perplexed him – what was this object, and how had it got there? The sailor wasn’t giving anything away.

Being questioned as to the nature of the piece of steel, he expressed himself as much astonished as we were at its presence, and said he should not have known it had we not told him, and had he not felt pain from our pulling it with the forceps.

So he didn’t know anything about it. Right. That sounds totally plausible.

He had never been in action, having been only two years in the king’s service, nor did he recollect having received any wound by which anything of the kind could have been introduced.

It’s not the sort of thing you’re likely to forget, is it?

About two inches below the opening made on the 19th, we observed a small white speck, or mark, rather resembling the mark left many years after vaccination, than a cicatrix [scar] of a wound. This was the only vestige of anything like a wound that we could detect in his back.

For reasons which will soon become apparent, it seems unlikely that this ‘small speck’ was the entry wound.

The surgeon continued to see his patient daily, tugging at the metal object and trying to loosen it a little at a time. He was still at it six weeks later; but on August 5th he finally lost patience and decided to take more radical measures.

The foreign body having become very little loosened, and now causing more pain on its being moved, I made a deep incision of about three inches in length over its course upwards, using it as a director, when it was easily extracted, and found to be a common kitchen fork, broken off close to its handle, and with one of its two prongs wanting about an inch from its point; it was blackened, and, in some degree, rusted.

Dr Burnes dressed the wound, and ten days later it had healed so well that the sailor was again able to work in the ship’s rigging. But had the discovery of the fork in his back jogged his memory? Not a bit of it:

Strange as it may seem, even after its extraction, the man persisted in adhering to his original statement of his being ignorant how and when it had been introduced; and during the two months I remained in the ship I was not able to gain further information in the matter. He seemed to have no defect of memory in any way, for he, without hesitation, gave me every information I asked as to his former life and habits.

He was, it transpired, a native of Topsham in Devon. The other biographical details are too dull to reproduce.

Setting aside his own statement altogether, my own opinion is, that it must have been in his back for many months, if not for years, judging from the indistinct and ill-defined mark left, taking it for granted that this was the wound by which it had been introduced, but which is yet problematical, from the little pain he experienced from its presence; and more especially from the knowledge that, during the previous months while he belonged to the Belvidera, he was never one day off his duty or on the sick list.

Amazing. By now the sailor had become a bit of a celebrity: numerous navy surgeons came to inspect him, as well as the captain and most of the officers and crew of the ship. He remained on board HMS Belvidera for another year, but then transferred to another ship and set sail for South America. Dr Burnes was eager to talk to him again, and when he returned to England in November 1837 they arranged a meeting.

The result was, that he came up to London, and, on the 8th of November, called upon me to show himself. He then stated that, about eighteen months ago, while washing himself, he felt a small, hard body on the left side of the neck, which he was inclined to believe was part of the fork. On examining the part I had no doubt myself of its being the portion of the broken prong, and which I asked permission to extract.

The sailor agreed, but before going ahead Dr Burnes consulted several of his colleagues. The list reads like a Who’s Who of early Victorian surgery:

I submitted him to the inspection of Sir William Burnett, Sir Astley Cooper, Sir Stephen Hammick, Mr. Liston, and other gentlemen, who corroborated my opinion as to its being a portion of the fork, and recommended its extraction.

On November 20th he operated and removed a fragment of metal, which…

…proved to be the prong, which had the same bronzed appearance as the fork itself, and was coated with rust at its fractured end. It does not exactly join with the fork, and I am inclined to think some very minute splinters may have been broken from it when fractured, or some chemical action, while in the body, may have corroded it. It is singular that he had never suffered pain from it, although it has crossed from the right side of the back to the left side of the neck.

This is strange but not unprecedented. There are numerous accounts of pins and other sharp metal fragments entering one part of the body and being extracted from another, having migrated quite a distance inside the body’s tissues. Dr Burnes was dying to know how it had got there in the first place (a fight? An embarrassing accident?) but his patient wasn’t playing ball:

Though cross-questioned by all who saw him, he still repeats his former story of being innocent as to the introduction of the fork. As he felt little inconvenience from my incision, he has left town with the intention of joining HMS President, for another three years’ cruise, and, from what I know of him, I am convinced my steel-backed friend will do credit to the wooden walls of Old England.

Accompanying the article is an engraving of the fork – a fearsome object. One thing’s clear: nobody could forget getting that stuck in their back. 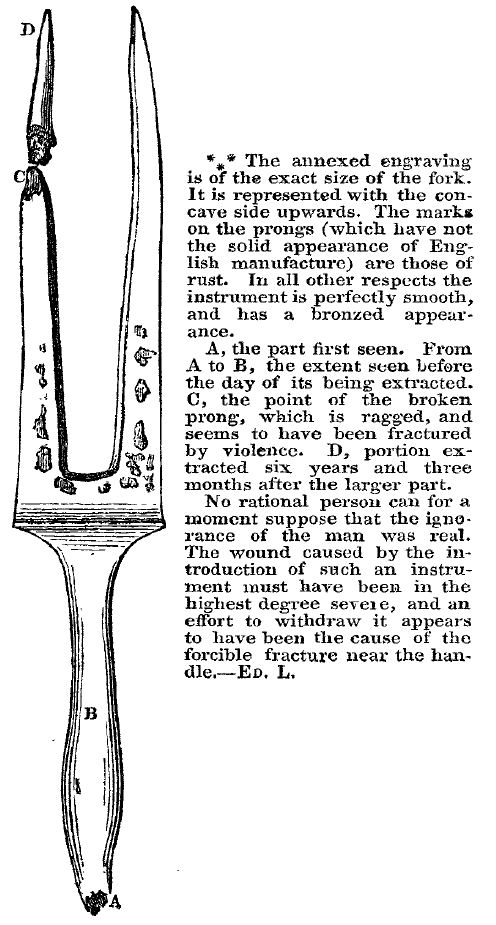