Dr Messenger Monsey was one of the best-known physicians in eighteenth-century London, although probably not one of the most capable. He began his career as an obscure country doctor in Suffolk, but his fortunes changed after he was summoned to the bedside of an influential aristocrat, the Earl of Godolphin, who had suffered a ‘fit of apoplexy’. Whether by skill or chance the earl made a good recovery, and having taken a liking to his doctor promised to introduce Monsey to his connections in London.

Within a few years Messenger Monsey had become personal doctor to the prime minister Robert Walpole, and was appointed physician to the Royal Hospital Chelsea, the famous retirement home for military veterans founded by Charles II.

Dr Monsey soon became a celebrated London figure, the friend of the actor David Garrick (until they fell out) and the writer and social reformer Elizabeth Montagu. He was also a noted eccentric and wit. Some years after his death an admirer published a slim volume entitled The Life and Eccentricities of the Late Dr Monsey, with a frontispiece portrait of its subject which certainly makes the case for his eccentricity. 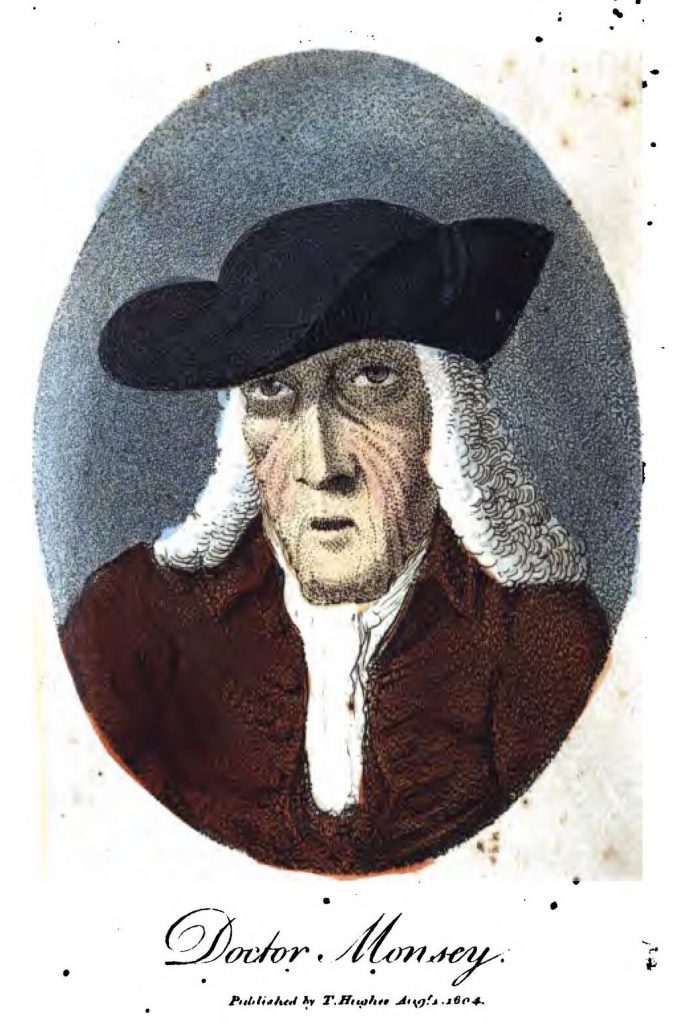 Dr Messenger Monsey was no great medical pioneer, shunning modern methods in favour of the tried and tested remedies of half a century earlier. But his biographer does include an innovative piece of dentistry he devised to remove decayed teeth:

The mode he adopted for drawing his own teeth was uncommon: it consisted in fastening a strong piece of catgut round the affected tooth firmly; the other end of the catgut was, by means of a strong knot, fastened to a perforated bullet; with this a pistol was charged, and when held in a proper direction, by touching the trigger, a troublesome companion and a disagreeable operation were evaded.

An ingenious and more extreme version of the traditional method which involves tying one end of a piece of string to a wobbly tooth, and the other to a doorknob. The door is then slammed violently, supposedly taking the tooth with it. Although known to generations of schoolchildren, there is no evidence that anybody has ever used it.

Though he used to declare that he never knew this operation attended with any ill consequence, yet he scarce ever met with anybody to adopt it, notwithstanding his frequent persuasions. A person, whom he fancied he had persuaded to consent, went so far as to let him fasten his tooth to the catgut; but then his resolution failed, and he cried out lustily that he had altered his mind: “But I have not,” said Monsey, holding fast the string, and giving it an instant and smart pull; “and you are a fool and a coward for your pains.” The tooth was immediately extracted from the mouth of the reluctant, but not disappointed, patient.

This rather uncouth behaviour seems to have been characteristic. Dr Monsey was renowned for his repartee, but the other great wit of his age, Samuel Johnson, was not an admirer, denouncing Monsey as “a fellow who swore and talked bawdy.”

He lived to the colossal age of 96, remaining physician to Chelsea Hospital until his death in 1788. This was an appointment made for life, but it was also customary for the hospital’s Board of Commissioners to line up a successor while the incumbent was still alive. This person was said to possess the ‘reversion’ of the position – and Dr Messenger Monsey outlived half a dozen of them:

The gentleman for whom it was last intended, having gone out to Chelsea, to take a view of his land of promise, the doctor saw him from his window examining very curiously the house and gardens; and guessing the purpose of his visit, he went out, and thus accosted him: “Well, sir, I see you are examining your house and gardens that are to be; and I can assure you they are both very pleasant, and very convenient: but I must tell you one circumstance; you are the fifth man that has had the reversion of the place, and I have buried them all; and what is more, there is something in your face, that tells me I shall bury you too!”

Dr Monsey was once again correct. In fact, so many unfortunate physicians died while patiently waiting their turn to take over at Chelsea that eventually nobody would even accept the position.

Like that other great wit Sydney Smith, Dr Messenger Monsey is remembered more today for what he said than anything he wrote. But his final masterpiece was his will, a terse document which caused a mixture of hilarity and offence. He left a considerable fortune of sixteen thousand pounds, all of which went to his daughter, with strict instructions that it was thereafter to be left only to her female descendants (a deliberate subversion of normal custom).

He then stipulated a number of smaller legacies:

He mentions a young lady with the most lavish encomiums on her wit, taste, and elegance, and bequeaths her an old battered snuff-box, scarcely worth sixpence.

She got off relatively lightly. Imagine being this unfortunate lady:

He mentions another young woman, to whom he says he meant to have left a legacy; but that he has discovered her to be a pert, conceited minx, with as many affected silly airs as a foolish woman of quality, which induced him to alter his mind.

This was not his only facetious instruction. Dr Monsey also left ‘an old velvet coat to one friend, and the buttons to another.’ But best of all, perhaps, were the instructions he left concerning the disposal of his own mortal remains:

My body shall not be insulted with any funeral ceremonies, but after being dissected in the theatre of Guy’s Hospital, by the surgeons, for the benefit of themselves and students, the remainder of my carcass may be put into a hole, or crammed into a box with holes, and thrown into the Thames.

One thought on “The most eccentric physician who ever lived”