Digging around in an 1851 edition of The Monthly Journal of Medical Science, I stumbled across a long and rather dry article about Roman medicine by a Dr Simpson, professor of midwifery at the University of Edinburgh.  His narrative is enlivened by a list of bizarre remedies favoured by Roman doctors.  He then points out – rather in the manner of this blog – that English medics were still recommending ridiculous medicines as recently as the seventeenth century.

As an example he cites the Pharmacopoeia Londinensis, a comprehensive list of medicines which London apothecaries were expected to stock, first published in 1618:

In its catalogue of simples it includes, for example, as medicinal remedies, eleven varieties of excrements, five varieties of urine, fourteen kinds of blood, seven kinds of gall, saliva and sweat, the sperm of the frog and seal; mummified men; the os triquetrum from the human skull; old castrated cats; ants; crickets; millipedes; &c. 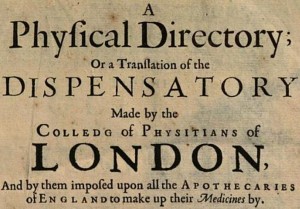 The original Pharmacopoeia was in Latin; in 1649 the great herbalist and physician Nicholas Culpeper (best known for the Complete Herbal of 1653) translated it into English.  I tracked down a copy of the 1720 edition, which retains many of the strange remedies listed in the original.  Apothecaries were required to sell various medicines commonly prescribed by physicians.  To that end, the College of Physicians issued a list of substances they should have on their shelves.  This is how it begins:

Therefore consider that the College give the Apothecaries a Catalogue of what Parts of living Creatures and Excrements they must keep in their shops.  The Fat, Greese or Suet of Duck, Goose, Eel, Bore, Heron, Thymatos (if you know where to get them), Dog, Capon, Bever, wild Cat, Stork, Coney, Horse, Hedge Hog, Hen, Man, Lyon, Hart, Pike or Jack, (if they have any, for I am perswaded ‘tis worth twelve-pence a grain) Wolf, Mouse of the Mountain (if you can catch them)  Pardal, Hog, Serpent, Badger, Gray or Brock, Fox, Vultur, (if you can catch ‘em).

That’s just the animal fats which apothecaries were required to keep in stock. Quite how they were expected to find a regular supplier of lion fat is not explained.  The bizarre list continues:

Dogs Turd, the huckle bone of Hare and a Hog, East and West Bezoar, Butter not salted, and salted,

At last!  An ingredient I could pick up at the supermarket.  Butter, that is, not dog turd. 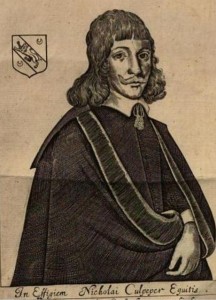 Cheese, madam?  Yes, you’ll find it in the aisle between viper’s flesh and bladder stones.

White, yellow, and Virgins wax, the brain of Hares and Sparrows, Crabs claws, the runners of a Lamb, Kid, Hire, Calf and Horse, the heart of a Bullock, a Stag, and a Weather, the horn of an Elk, a Hart, a Rhinoceros, an Unicorn

This latter seems a tall order, but at this date refers not to the mythical beast but to the narwhal, whose horn bears a striking resemblance to that of the unicorn.

the skull of a man killed by a violent death

If every apothecary in the country was expected to stock this item, there must have been lively demand for the bodies of murder victims.

a Cocks comb, the tooth of a Bore, an Elephant, and a Sea Horse, Ivory or Elephants Tooth, the skin a Snake hath cast off, the Gall of a Hawk, Bullock, a she Goat, a Hare, a Kite, a Hog, a Bull, a Bear, the cases of a Silk worm, the Liver of a Wolf, an Otter, a Frog, Ising-glass, the Guts of a Wolf and a Fox, the milk of a She ass, a she Goat, Woman, an Ewe, an Heifer, East and West Bezoar, the stone in the head of a Crab, and a Pearch if there be any; stone in an Ox gall, stones in the bladder of a man, the Jaw of a Pike or Jack, Pearls, the marrow of the leg of a Sheep, Qx. Goat, Stag, Calf, common and virgin Honey, Musk, Honey, a Swallow’s Nest, and Crabs Eye, the Omentum or call of a Lamb, Ram, Wheather, Calf, the white, yolks and shells of Hen eggs, Emmets eggs, the bone of Stag’s heart, an Ox leg, the inner skin of a Hares Gizzard, the wool of Hares, the feathers of Partridges, that which Bees make at the entrance of the Hive, to keep out cold, if they make any thing at all: for I assure you I could never find any yet, and have been a diligent searcher after it…

Culpeper seems to be on the point of rebellion: even he admits that the thing he’s expected to stock doesn’t exist.

A degree of repetition enters the list at this point; but if you’re going to buy one sloughed-off snakeskin you might as well have two, I suppose.

Can you imagine what the average apothecary’s shop must have smelled like in the seventeenth century?

the ancle of a Hare, of a Sow, Cubebs, water shells as Blatta, Bazantia, Buccinae, Crabs, Cockles, Dantalis, Entalis, Mother of Pearl, Mytulae Purpurae, os Sopias, Umbelicus mannus, the stones of a Horse, a Cock, the hoof of an Elk, of an Ass, a Bullock, of a Horse, of a Lion,

Again, lion paws can’t have been simple to get hold of in the seventeenth century.  The list concludes with more substances which must added greatly to the, er, fragrance of the apothecary’s shop:

the Piss of a Boar, of a Shee Goat, of man or woman that is a maid, the moss on a mans skull.

This final item is rather interesting: a species of lichen which grew on skulls exposed to damp air was believed to have curative powers.

The animal remedies in the Pharmacopoeia make up only the first section of a much longer document: when you take into account the herbs, fruits and roots they were also directed to stock, you start to realise that being an apothecary was not a straightforward (or cheap) business.

One thought on “Brain of hare and turd of dog”