Those who think that morbid obesity is a uniquely modern phenomenon should read William Wadd’s ‘Comments on Corpulency’, published over several issues of the London Medical Gazette in 1828.  In a long essay he considered dozens of cases he had encountered, many of whom would be today under the care of a bariatric surgeon.  Here’s one of them: this encounter began with a letter he received from an unnamed ‘fat sportsman’:

“I am growing heavier and fatter than I wish to be, (my ordinary weight a few years ago was fifteen stone, and I am now increased to nineteen). The exercise I take does not prevent it at all. I should not quite like to be put on a regimen of abstinence, but upon some system which, with moderate living, might gradually bring me back to about my old standard. All this time I am quite well, and should have little to complain of were I not fond of sports which I pursued with greater convenience when I was thinner, and did I not observe that persons inclined to increase in size lose their activity rather too soon in life.”

By ‘sports’ he of course means hunting.  Mr Wadd visited the gentleman at home:

Observations.—This gentleman was an ardent sportsman, took excessive exercise, went through great exertion every morning, and in the afternoon rewarded his virtuous labours by eating, drinking, and sleeping—the fatigue of his sporting pleasures being previously sustained by an occasional draught of stout ale. He did me the favour of a visit, when I found, as he had stated, that he was in excellent health, but his size interfered with his plans,—“he could not get through the woods so easily as he used to do,” and “it was not so easy as formerly to find a horse to carry him.” “Now what do you recommend me to do?”—“Keep your eyes open, and your mouth shut.”— “Poh! Nonsense! that won’t do for me—give me something to take: have you no pills?”

The search for the magic ‘diet pill’, a medication which will obviate the need for going on a diet, is nothing new.

The pills this gentleman was in search of were to counteract the effects of a dose of strong ale, two gallons a-day being his moderate allowance. As he was not only a merry fellow but a scholar, I gave him the opinion of an old poet on the subject of ale:—

This is not, as I at first assumed, a gratuitous quotation from classical Latin, but something more obscure: a medieval poem by the 13th-century hagiographer Henry of Avranches.  The stanza from which this is extracted was translated by an anonymous 18th-century writer:

Of this strange drink, so like the Stygian lake,
Men call it Ale, I know not what to make.
They drink it thick, and piss it wond’rous thin;
What store of dregs must needs remain within?

The ‘corpulent gentleman’ was evidently more of a classicist than I am, because he was not at all put out by his doctor spouting Latin at him:

He laughed, and replied with great good humour, “I see how it is—if I am ale-ing all day, it follows of course, I must be oil-ing all night. Egad! I can’t help it; I should die without it, and I had rather die with it.”

A sentiment held, alas, by centuries of alcoholics.

It is incredible the quantity of malt liquor that some men swallow—to the amount of many gallons. The Welsh are great consumers of ale, and it is recorded of a Welsh squire, Wm. Lewie, who died in 1793, that he drank eight gallons of ale per diem, and weighed forty stone; which, for the reasons stated in the Latin verses, is not improbable.

The article concludes with the surprising revelation that malt ale (by which is meant stout) was invented by the Egyptians.

This Vinum Britannicum, borrowed from the Egyptians, was originally patronised by the Welsh, and has subsequently been considered the natural beverage of Englishmen. I have known some honest Cambrians who, like Boniface, ‘ate it and drank it,’ and would continue drinking it under constitutional derangements that would have killed an ordinary man.

“Nothing will stay on my stomach,” said an old toper, “but beef-steaks and Hodgson’s ale!—What do you think of my stomach, eh doctor?”—“Why, I think your stomach a very sensible stomach,” was the equivocal reply. 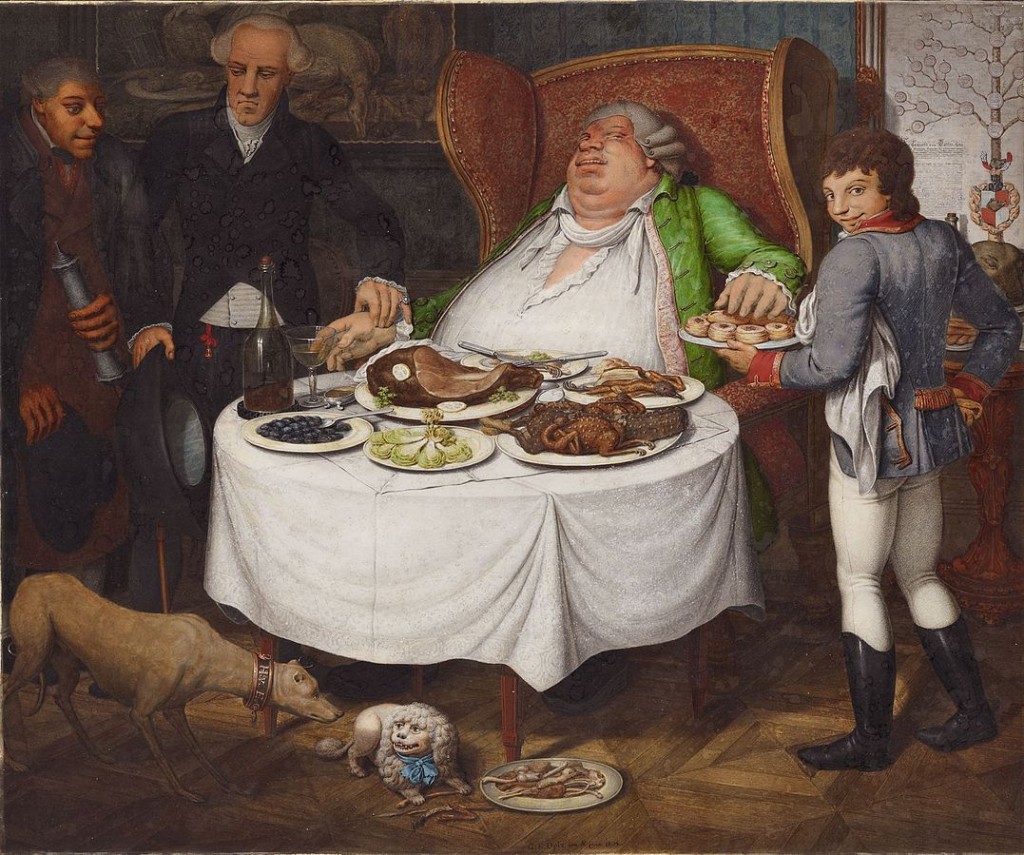 One thought on “Aleing all day, and oiling all night”