A post last week referred to Andrew Duncan, founder of the Medical and Philosophical Commentaries, the first regular medical journal published in the United Kingdom.  In 1810 he wrote a paper for a publication slightly less well known for its original medical research, the Memoirs of the Caledonian Horticultural Society.  His subject?  Lettuce.

Opium, or the inspissated [congealed] white juice which exudes from the capsule of the Papaver somniferum [opium poppy] when wounded, has long been allowed to be one of the most useful articles employed in the alleviation or cure of diseases… It is, however, much to be regretted, that there are individuals of the human species, with whom, from peculiarity of habit, opium seldom fails to produce distressing consequences. There are also conditions of disease, in which it may be very necessary to induce sleep, or allay pain, though circumstances occur by which the use of opium at that time is contraindicated. Hence, it has been long a desideratum in the healing art, to discover other powerful quieting medicines.

By the early 19th century the narcotic and analgesic properties of opium were well known.  It was, however, expensive, since the opium poppy was difficult to cultivate in the northern climate.  But Dr Duncan believed he had discovered a useful substitute. 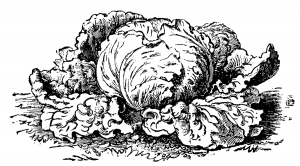 It has been the opinion of many, that all the milky juices spontaneously exuding from wounded vegetables, possess somewhat of the same sedative power, with the milky juice of the poppy.  Few plants in Britain, afford such milky juice more copiously than the common garden Lettuce, the Lactuca sativa of Linnaeus; and every one must have observed, that this juice, when spontaneously inspissated by the heat of the sun, on the wounded plant, soon assumes the dark colour of opium, while, at the same time, it possesses in a high degree the peculiar, and I may say, specific taste, which distinguishes that substance. And besides this, it is a well known fact, that lettuce was much used by the ancients as a soporific.

Indeed, lettuce was used as a soporific agent by many ancient doctors, including Galen.  To investigate its properties Dr Duncan set up a small experimental garden in his house at St Leonard’s Hill, near Edinburgh, planting a large number of iceberg lettuces.

I allowed the plants, about a hundred in number, to shoot up, till the top of the stem was about a foot above the surface of the ground. I then cut off about an inch from the top of each.  The milky juice immediately began to rise above the wounded surface. Though then of a white appearance, it had next day formed a black, or dark coloured incrustation, over the surface where the stem was cut off. I found it impossible to separate this by scraping, as is done with the milky juice exuding from the head of the poppy, when it has assumed the form of opium. I therefore cut off with a sharp knife a thin cross slice of the stem, to which the whole of the dark-coloured opium-like matter adhered. This was thrown into a wide-mouthed phial, about half filled with weak spirit of wine, the alcohol dilutum of the Edinburgh Pharmacopoeia, formed of equal parts of rectified spirit and water. By this menstruum, the whole black incrustation on the thin slice of the stalk was dissolved, and the spirit, as may readily be concluded, obtained both the colour and taste of the black incrustation.

Each of my plants, in consequence of the fresh wound inflicted by the removal of the thin cross slice, afforded a fresh incrustation every day. And by throwing these into the phial, I soon obtained what I concluded to be a saturated solution of the exudation from the lettuce, or ather of the milky juice in its inspissated state. It was then strained off, to separate the pure solution completely from the thin slices of the stalk. To this strained spirit, which had nearly both the appearance and taste of the ordinary laudanum of the shops, I have given the name of Solutio spirituosa succi spissati lactuca.

A snappy name, I’m sure we can all agree.

From trials made with this solution, both on myself and others, I have no doubt that it is a powerful soporific.  At present, however, I intend nothing more but to communicate to the Caledonian Horticultural Society a method of preparing a soporific medicine from common lettuce. For ascertaining more fully its medicinal effects, I am at present engaged in a series of trials, which may perhaps be likewise communicated to them.

As a result of this paper, the Caledonian Horticultural Society agreed to award a Prize Medal to the investigator who succeeded in developing the best method of preparing a ‘soporific medicine’ from lettuce.  The competition seems not to have been a popular one, however: the only subsequent communications on the subject both came from Dr Duncan.  After announcing that he had now developed four separate preparations of the lettuce ‘milk’, he revealed that he had now used it in clinical practice:

To my former observations, I can now add, that during the course of last winter, I have made many trials of these articles, both in hospital and in private practice. I have particularly employed the first, and the fourth of these preparations, in the clinical wards of the Royal Infirmary, where the effects were observed by many attentive and ingenious students. They have witnessed the benefit which may be derived from them in procuring sleep, in alleviating pain, and in allaying inordinate action, particularly troublesome cough. I am therefore not without hopes, that when the experiments I have made, are more generally known, they may have the effect of calling the attention of other medical practitioners, and of some intelligent gardeners, to a subject, which, in my opinion, is of considerable importance.

As far as I’m aware, the investigation of lettuce-based narcotics ended with Dr Duncan.  Market gardeners and allotment owners may be relieved to know that they are not going to be raided by the drugs squad.

One thought on “Lettuce, a Class A drug”