H.V., 21 years of age, had enjoyed good health up to the age of 15, when he began to complain of some feverish symptoms. A few days afterwards the left lower extremity presented an eruption of small, slightly elevated red spots, occasioning burning heat and pain in the skin: these symptoms soon disappeared, but the foot began to swell, and the lower extremity became tumefied and soon acquired double its natural volume. The general health of the patient was now in no way influenced by the disease. The tumefaction emptied itself from time to time by two small orifices below Poupart’s ligament, giving exit to a white transparent viscid fluid, in greater or less quantity.

Poupart’s ligament (the inguinal ligament) is in the groin. The ‘tumour’ seems to have been a collection of fluid rather than a tissue growth. Possible causes of such a symptom might include infection or organ failure – but there may be others.

As the tumour diminished the exanthema reappeared.

Now more often referred to as an ‘exanthem’, meaning a rash.

The patient passed three years in this state, which was not altered by the various remedies employed. At this period the genital organs, always little developed and extremely small, began to develop themselves in a sudden and extraordinary manner; the scrotum especially became very large; the external surface of this part was soon covered with a number of small vesicles [pimples], which opened, and discharged a great quantity of milky fluid: when the scrotum was compressed, a quantity of the same fluid issued through the two small pores we have noticed, below Poupart’s ligament on the inner sides of the thigh.

This secretion, though generally of a nature completely milky, sometimes presented an aspect slightly serous.

Serous = transparent or straw-coloured fluid. Usually regarded as a good sign, in contrast with pus and other coloured fluids which can indicate infection.

The tumor continued to enlarge, although the secretion was not constant, periodically, every three or four weeks. There were now pains in the groin and loins, darting to the scrotum, and when the patient assumed the upright posture, about two or three pounds of the milky fluid came away.

That’s about two pints of the stuff being squeezed out when he stood up!

Since the commencement of the disease in the scrotum, the ulcer of the leg had closed, and the tumefaction of the extremity much diminished. On the 23rd of August, 1813, the patient was admitted into the hospital at Zurich. The scrotum was now tumefied, and to the touch gave the sensation of a female breast; the skin of the penis was tumefied; the colour of the parts was more deep than natural; the corpora cavernosa were small, and retracted towards the pubis…

The corpora cavernosa are the spongy erectile tissue inside the penis.

…the testicles were also very small, and drawn up to the rings; the larynx was little prominent, but the voice was not feminine; the beard and the hairs on the pubis were delicate and few; the right extremity was a little larger than the left.

These observations indicate that the doctor suspected some sort of developmental disorder which had impaired the patient’s sexual development – what might be recognised today as an endocrine (hormonal) disorder.

During the patient’s stay at the hospital, the secretion of milk took place several times. Thus, about the 26th of August, the usual precursory symptoms appeared, and more than three pounds of milk were discharged. On the 30th, there was a new access of fever, and an appearance of the exanthema on the right thigh. On the 11th of September, a fresh discharge of about half a pint of fluid took place, not presenting the same white colour or consistence of the former, and giving out a little the odour of semen.

If you’re wondering whether it was semen, bear in mind that the average man manages to emit less than 0.5% of this amount in one go, as it were.

During the months of September and October, the tumour of the scrotum and the secretion of a milky. fluid alternated frequently with the exanthema on the thigh; however, the tumefaction of the skin covering the genital organs, diminished remarkably, as well as the quantity of fluid discharged, which became more serous and troubled in its appearance, and finally disappeared.

And that’s it. No explanation, no suggestion, even, of what might have occurred. Well, not quite: the following week the Lancet printed a small addition: an analysis of the ‘milk’. It is a document of rare interest. It states that

a physical and chemical examination of the excreted fluid showed it to be of a milky and not of a lymphy nature. It had a sweet salt taste, and when allowed to remain for some time, it divided into two parts; the greater portion resembled half-coagulated yolk of egg, running a little into a gray colour.

Yes, you right that correctly: somebody actually tasted the patient’s scrotum milk.

The other fluid part had the appearance of slightly coagulated milk, and when examined under the microscope exhibited spheroidal globules of various diameters, smaller, however, than those seen in goats or asses’ milk.

The liquid was analysed by Carl Löwig, an eminent chemist who was one of the first scientists to identify bromine. As well as pronouncing it ‘ill flavoured’ (did he really have to taste it too?) he found that it contained the following substances: 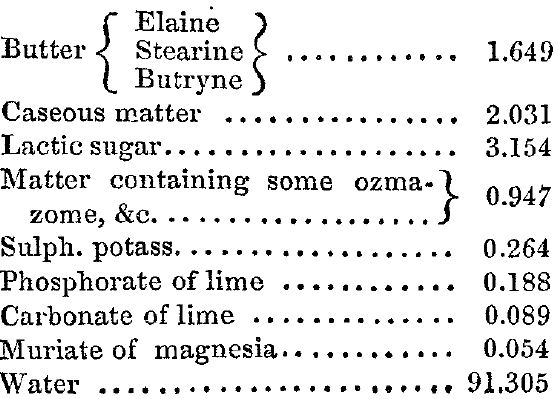 Ozmazome is an archaic term for a substance once believed to give animal flesh its meaty flavour. ‘Lactic sugar’ – now known as lactose – makes up around 4% of the volume of milk. ‘Caseous’ means literally ‘cheesy’. Professor Löwig hadn’t just detected milk, but butter and cheese too – a supermarket’s entire dairy aisle.

What on earth was going on? The techniques of chemical analysis were rudimentary in 1835, and heavily reliant on subjective impressions, such as the physical appearance of the substance being investigated. So Professor Löwig may have been wrong. But whether or not it was milk, I have no idea what the liquid was or why it was being produced. So I leave it open to my expert readers to suggest a theory – you are very welcome to leave your thoughts below!

Update: Commenter ‘Taltyelemna‘ appears to have solved the mystery for me by observing that the fluid sounds like chyle. It certainly seems to fit the description: chyle is a milky bodily fluid secreted by the small intestine. The majority of this liquid is lymph, but it also contains fatty droplets called chylomicrons whose function is to transport fat around the body. In chemical terms it has many of the same characteristics as milk (lipids in a watery suspension), which vindicates Professor Löwig’s analysis.

Chyle is usually confined to the digestive tract and lymphatic system, but disease or injury can cause a condition known as chyle fistula, in which the fluid leaks from a compromised vessels and begins to accumulate inside the body. The patient in this case had prominent swelling, which was almost certainly chylous ascites, caused by a large reservoir of chyle inside the abdomen. The fluid eventually started to leak through the skin (through openings known as chylocutaneous fistulas). As a paper published in 2001 in the Journal of Vascular Surgery points out, some patients exhibit ‘intermittent or continuous discharge of chyle from cutaneous vesicles in the perineum, scrotum, labia, or the legs, interfering greatly with quality of life.’ The most frequent cause of the condition is lymphangiectasia, a congenital disease in which the lymph ducts become dilated, causing the chyle to travel backwards and pool in particular areas of the body.

Many thanks to Taltyelemna for helping to clear this up!

3 thoughts on “An abnormal secretion”