Some of the best titles in the history of medical literature are to be found in the early volumes of the Philosophical Transactions. This example comes from 1724, and was sent in by Mr Robert Payne, a surgeon from Lowestoft in Suffolk:

James Bishop, an apprentice to a ship-carpenter in Great Yarmouth, about 19 years of age, had violent pains in the lower part of the abdomen, for 6 or 7 months; it did not appear to be any species of the colic; he sometimes made bloody urine, which induced Mr. P. to believe it might be a stone in the bladder. He was very little relieved by physic; at length a hard tumour appeared in the left buttock, on or near the glutaeus maximus, 2 or 3 inches from the verge of the anus, a little sloping upwards. A short time after he voided purulent matter by the anus, every day for some time. 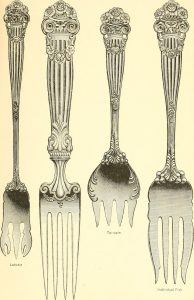 Shortly after, the prongs of a fork appeared through the orifice of the sore, above half an inch beyond the skin. As soon as the prongs appeared, his violent pains ceased; I divided the flesh between the prongs, according to the best of my judgment; and after that made a circular incision about the prongs and so with a strong pair of pincers extracted it, not without great difficulty, handle and all entire; the end of the handle was besmeared with the excrement, when drawn out.

Naturally. This was a surprisingly large item of cutlery:

It is 6 inches and a half long, a large pocketfork; the handle ivory, but is dyed of a very dark brown colour; the iron part is very black and smooth, but not rusty.

The young man was reluctant to explain how he had managed to get himself in this predicament; at least, not until he was threatened with the withdrawal of his allowance.

A relation of his, a Gentleman in this neighbourhood, who sent him to be under my care, the Reverend Mr Gregory Clark, Rector of Blundeston, on whom, in a great measure, his dependence is, threatened never to look upon him more, unless he would give him an account how it came; and he told him, that, being costive, he put the fork up his fundament, thinking by that means to help himself, but unfortunately it slipped up so far, that he could not recover it again.

The moral of this latest cautionary tale: if you’re constipated, it’s better not to stick a fork up your bottom. Mr Payne adds a postscript:

PS He says he had no trouble or pain, till a month, or more, after it was put up.

5 thoughts on “A fork up the anus”