In 1837 a Canadian teenager tripped over while walking back to his parents’ house.  The accident did not hurt much, but it made him strangely famous: journals on both sides of the Atlantic reported the case with astonishment, and the story was reproduced in several anthologies of medical curiosities.  And it really is extraordinary.

The tale was first reported in 1849, some twelve years after it took place, in a short-lived Canadian publication, the British American Journal of Medical and Physical Science (its founder, Archibald Hall, was evidently not good at snappy titles: in a later incarnation it became known as the British American Journal Devoted to the Advancement of Medical and Physical Sciences in the British-American Provinces).

The story seems so implausible that the editor only agreed to print an account of it after receiving evidence from three reliable witnesses, two of them doctors.  The first on the scene was not a medical man but a local dignitary, J.D. McConnell, a senior magistrate.  He reports that 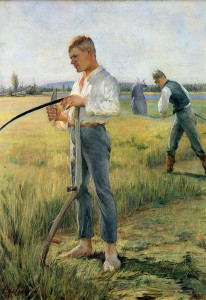 In the year 1837, Master James Boyle, a youth of about 18 years of age, had been mowing on the lawn, in the vicinity of his father’s house, in company with his younger brother, and as is the custom, before going to dinner, he had taken the scythe off the snaith, or handle, for the purpose of carrying it, in order to have it sharpened. As he walked homewards, a distance of about a few hundred yards, he happened to step on a log of wood, when his foot slipped, and he fell upon the scythe-blade, which entered his chest under the right armpit and the point appeared under the left. The hapless youth lay still with the deadly instrument in his breast until his brother, who displayed inimitable presence of mind, drew it slowly out, observing with much caution, as he did so, the curvature of the blade. The effusion of blood which followed was not so great as might have been expected, and with his brother’s aid he walked home. There was, to the best or my belief, no spitting of blood. A surgeon was immediately sent for, and such means as his experience dictated were adopted.

Not, in fact, a surgeon, as a postscript explains:

There was no medical man resident in that vicinity when this occurrence took place. Frederick Coffin, a whaler, commonly called ‘Dr Coffin’…

A name which cannot have filled his patients with confidence.

…who generally lends a hand at bleeding, drawing teeth, and other similar services, has been very successful in his attempts at relieving the distressed.

Under his care, the youth continued slowly to improve. A day or two after the accident, it chanced that H.M.S. Sappho put into Gaspe Bay, and I lost no time in making the case known to the surgeon of the ship, Mr. Thompson, who directed Assistant-surgeon Sproule to examine the patient, and to render any assistance that might be practicable, which that gentleman immediately did. I remember his remarking that the absence of bloody expectoration was a favourable symptom. As the accident and its unexpected results appeared to me an inscrutable act of Providence, I deemed it desirable that Dr. Sproule should communicate to me by letter his opinion of the case.

This is Dr Sproule’s assessment of Master Boyle’s injuries: 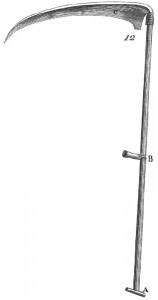 The point of the scythe, it appears, entered the axilla, or armpit, between the third and fourth ribs of the right side, passing horizontally through the chest, and coming out through the corresponding ribs of the opposite side, making a small opening compared to that by which it entered—accounted for, no doubt, by the point alone coming out. The wound of the right side appears to have been about 2 or 3 inches long, that on the left about one.

Considering the situation of the wound, and the instrument by which it was made, I consider it a most miraculous escape, which I can only account for by saying that the back of the blade was directed towards the large blood-vessels, and thereby protected them. Had the edge been otherwise directed, I have no doubt but that the consequences would have been immediately fatal.

‘Miraculous’ is not too strong a word.  The blade evidently missed the heart and lungs (though there are a few cases on record of blades or musket balls passing straight through the lungs without significant trauma).  What is most surprising is that one would expect a blade taking this route through the chest to puncture the pleura, the sac surrounding the lungs.  If this had happened, the boy would have suffered a collapsed lung (pneumothorax), which would have produced pretty obvious symptoms.  It is somewhat mysterious that he avoided this outcome.*

It only remains to add, that Master James Boyle is, at present, a robust and vigorous man, and without any local complaint. His pursuit is chiefly that of his father, a whaler, and his domicile is up the south-west branch of Gaspe Bay, in the district of Gaspe, Lower Canada.

*A contemporary analysis of the case by an unnamed doctor suggests that he did in fact suffer a pneumothorax:

My supposition is, that, when the scythe entered the breast, the right lung instantly collapsed, and the back of the blade glided harmlessly over its surface. Its further passage through the mediastinum into the left cavity was probably effected at the moment of separation, and when the left lung was so far reduced in size as to offer a partial resistance to the point of the instrument, and thus a comparatively small wound was the result. The absorption, as well as the secretion of gases by serous membranes sometimes proceeds rapidly, from which we may infer that, so long as the scythe remained fixed, there was no new admission of air, and thus the right lung soon recovered, in part at least, its functions. Upon the withdrawal of the blade, the further exclusion of air was probably secured by the external cut forming a valve.

One thought on “A case for Dr Coffin”