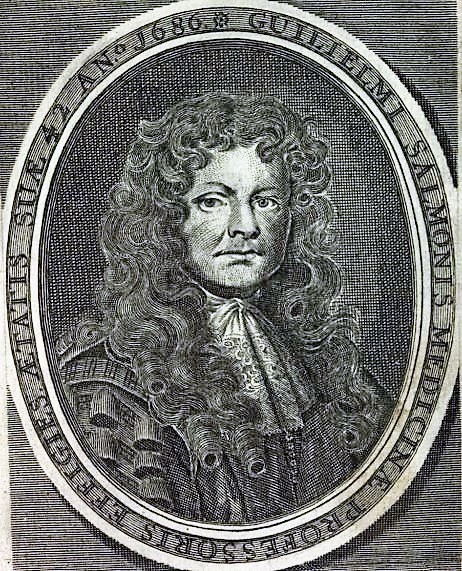 William Salmon was a seventeenth-century physician and a prolific writer, the author of numerous books on surgery and internal medicine. He also practised alchemy and astrology in an age which regarded these disciplines as legitimate and empirical sciences (his contemporary Isaac Newton was also an enthusiastic alchemist).

In 1687 Salmon published a book entitled Παρατηρηματα (‘Observations’, for those few of my readers not conversant with ancient Greek), more commonly known by its subtitle Select physical and chyrurgical observations.

A nun about 34 years of age was very thick of hearing, and somewhat deaf, and had a great and frequent noise in both her ears; by God’s assistance I cured her with the following things.

A lye to wash the head.

A lye is an alkaline solution, traditionally obtained by soaking ashes in liquid. This was typically done in a plant pot, so the class of chemicals involved became known as potash.  This is the origin of the name for the element potassium; lyes were originally solutions containing potassium salts.

Take mint, penny-royal, asarum roots, of each a handful; cut all, and bruise them a little, and put them into a bag, and boil it in lye.

Pennyroyal, an aromatic perennial herb, was highly regarded by ancient medics and even used in cooking, though it is so pungent that it fell out of favour. Oil extracted from the plant is still used in aromatherapy; it is, however, lethally toxic and should never be ingested.

In the morning before meat her body being exonerated of its excrements, her head was every day washed with the said lye; then well rubbed with hot cloths, dried and covered.

I love that use of the word ‘exonerated’. I might start using it myself. “Sorry I’m late, I was being exonerated.”

After washing and cleansing of the head, the quantity of a pea of the following sternutatory, was blown up into her nostrils, by which sneezing was provoked, and much thick and clammy snevil was cast forth, out of the foremost ventricles of the brain.

A sternutatory is an agent to provoke sneezing. Snevil, meaning mucus, is an alternative spelling of ‘snivel’.

Very fragrant. It sounds like the sort of thing you’d put into a stew.

Her head thus purged, I caused her to bleed plentifully from the head-veins in each arm: thus was her hearing restored, and the noise taken away.

At first I was sceptical that Salmon had really cured this nun. But it’s not impossible. Both the deafness and the noise in the ears (tinnitus) might have been caused by an upper respiratory tract infection accompanied by unusual amounts of mucus (essentially, a particularly unpleasant head cold). If he treated her just when the cold was starting to abate, violent sneezing might have cleared any blockage in the Eustachian tube between the back of the throat and the middle ear – resulting in an instant cure.

As a quick bonus, here’s a gem I found in a later section of the book, devoted to the cure of hiccups:

One that was divers times grievously afflicted with the Hiccough, was cured by applying a brown toast warm to his stomach. The toast was steeped in treacle and aquavitae.

Aquavitae is a strong solution of ethanol (alcohol). I think I’d rather eat the toast than put it on my stomach.

One thought on “Toast and herbs”