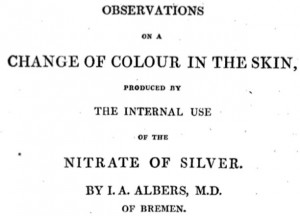 An alarming case was revealed to a meeting of the Medical and Chirurgical Society of London in November 1815, and reported in the Transactions of the society early the following year. It provides a good example of the fact that new medicines often carry dramatically unexpected side-effects. A Dr Albers of Bremen reported the following:

The skin of a woman, the history of whose distemper I shall communicate in the sequel, had contracted a blue colour all over the body. As there was not the least appearance of any disease in the heart, and as neither the circulation nor respiration were in the least affected, I was unable to trace the cause of this phaenomenon; and I probably might have laboured in vain to discover it, had not my attention been drawn to it by a letter from the late Dr. Reimarus of Hamburgh, who informed me, that in his town two patients had exhibited a blue tinged skin, after the use of the nitrate of silver.

This remarkable phenomenon is known as argyria. Many silver compounds are photoreactive – they can be broken down by sunlight.  When colourless silver nitrate builds up in human tissue, it can be broken down into metallic silver or to silver sulphate, a colourless substance which darkens when exposed to light. The result is a dark pigmentation which affects any part of the body which usually sees daylight. Cases of argyria proliferated after the widespread adoption of silver nitrate as symptomatic relief for the seizures caused by epilepsy.

A slightly later report in the London Medical Gazette describes another unfortunate,

a highly respectable gentleman now residing in the city…who took the nitrate under the advice of a physician, for epilepsy. The discoloration is so marked, that he has been obliged to give up business, since, if he went into the street, the boys gathered around him, crying out “there goes the blue man.”

A fat woman, aged 30 years, of a relaxed habit of body, but otherwise healthy, and the mother of four blooming children, in 1801 was seized, during the night, with epileptic fits, without there existing any cause that could be assigned for them: these fits returned four times in the interval of from four till six o’clock.

Although after the use of these pills the spasms did not return, the patient continued them without my knowledge, near three years and a half without intermission; in the latter part of this period, however, she took them only in the evening. Towards the end of the last year, she being then pregnant of her fourth child, the change of her complexion became first observable, and particularly so in her face. The tinge was at first bluish; it then grew gradually darker, till at last it became, as it has since continued, quite dark and almost black. This blue colour has spread all over the body, yet is most intense on the face, on the forepart of the neck as far as the middle of her bosom, and on the hands and nails. Whenever the patient holds her arms in an erect posture, the blue colour is considerably lessened, and even disappears almost entirely. The sclerotica is likewise considerably coloured.

The sclerotica (usually called the sclera today) is the white part of the eye. A blue sclera is quite a dramatic look (as we shall see).

The blue colour is not of the same depth at all times, but often changes several times in one and the same day, without there being any determinate reason for it. At one particular time, however, it appears strongest, namely, at the epoch of menstruation, after the accomplishment of which it again vanishes. The patient’s blood looks altogether like that of a person in perfect health. The woman is, besides, quite well, and does not experience the least impediment in breathing, and since the use of the nitrate of silver, has only once had a relapse of her epileptic fits. A variety of remedies, for example, sulphuric acid, nitric acid, chalybeates, baths of different kinds, &c. have hitherto been exhibited to no purpose whatever. The colour has for these ten years remained the same.

Dr Albers discussed the case with his colleagues, and discovered that they had previously encountered three patients who had been turned blue by silver nitrate:

A lady, 35 years old, employed this remedy eight years ago, and her sister, 38 years old, ten years back, against epileptic fits; no cure, however, was effected by it; but merely a less frequent return of the paroxysms. In both the blue colour is visible at this very time, and more particularly in those parts which are exposed to the light, as the face, hands, neck, and articulations; the colour is less strong on the body. The latter patient is coloured deeper than the former.

The third patient was a young man, aged 20, who had suffered epileptic fits since childhood.  Alas, this was not his only affliction.

In this case there exists besides, from his early youth, an unconquerable propensity to onanism. All the remedies administered proved unsuccessful, and very frequently he was affected with three and four fits in one day. When I treated him five years ago, I exhibited the nitrate of silver, the only remedy that had not yet been used. He made use of it during a quarter of a year with the only effect, that at the end of this period the paroxysms returned only once in a fortnight. But as the efficient cause of the disorder still continued to operate, under which circumstances no cure could be expected, I thought it incumbent on me, to rest contented with seeing the frequency of the fits lessened, fearing lest the continued use, in large doses, of this corrosive remedy might injure the stomach of so weak an individual.

He, too, turned dark blue.  Twenty years later, in an essay on the Materia Medica in the London Medical Gazette, the pharmacologist Jonathan Pereira suggested that the use of such a dangerous substance was unwarranted:

The pathology and causes of epilepsy are so obscure, that we know not what are the cases best adapted to this or to other modes of treatment. When this salt, therefore, is employed, it is completely on empirical grounds. In the few cases in which I have seen it tried, no benefit was gained; and I know this to be the experience of many others. So that I think the slender chances of success hardly warrant our incurring the risk of tinging the skin.

This is not merely a historical curiosity. Many adherents of alternative medicine use a preparation of colloidal silver (a suspension of metallic silver particles in liquid) as a general-purpose antiseptic and anti-microbial preparation. Silver does indeed display anti-microbial properties, but most physicians today point out that the dangers of this treatment outweigh its benefits, not least because modern drugs are far more effective.  In 2008 the dangers of colloidal silver were widely publicised when Paul Karason, an American who had been taking large doses of the preparation for ten years, was interviewed on TV about his dramatic case of argyria.  His appearance was, well, remarkable – you’ll find an image here.

4 thoughts on “The woman whose skin turned blue”