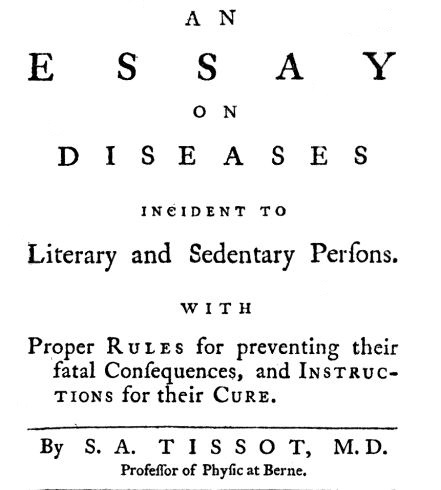 It has long since been observed, that a close application to study is prejudicial to health.

It must be said that much of Tissot’s case is unanswerable – particularly when he deals with the dangers of a sedentary lifestyle.

The diseases to which the learned are particularly exposed arise from two principal causes, the perpetual labours of the mind, and the constant inaction of the body; an investigation into the fatal effects of which causes will exhibit an accurate description of their diseases.

Tissot believed that it was not just inactivity which damaged the body; overexertion of the brain could also have grievous consequences:

That we may understand the influence the workings of the mind have upon the health of the body, we need only remember in the first place, the fact…that, firstly, the brain is in action during the time of thinking. Secondly, that every part of the body which is in action becomes weary; and that if the labour continues for any length of time, the functions of the part are disturbed. Thirdly, that all the nerves proceed from the brain, and exactly from that part of it supposed to be the seat of thinking, and called the sensorium commune. Fourthly, the nerves are some of the most principal parts of the human frame; that they assist in all its functions; and that whenever their powers are disturbed, the whole animal economy must suffer. These evident principles being once established, everyone must be sensible that when the brain is exhausted by the action of the soul, the nerves must of course be injured; in consequence of which, health will be endangered, and the constitution will at length be destroyed without any other apparent cause.

Dr Tissot gives a number of examples.  The first is a dramatic example of spontaneous hair loss (idiopathic alopecia):

The uncommon accident which happened to M. le Chevalier D’Epernay is well known: after an assiduous application for the space of four months, without any previous symptom of disease, his beard, his eye-lashes, his eye-brows, and in short all the hair of his head and body fell off. This phænomenon was certainly brought about by the little bulbs, which are the roots of the hair, being deprived of nourishment; and this might arise from three causes: 1st, from the powers of the stomach, the first organ of digestion and nourishment, being disordered: 2dly, from the action of the nerves, which have so great a share in nutrition, being diminished, and which being employed by the soul, were inadequate to the functions of the body: 3dly, from that kind of low fever men of letters are subject to, and which destroying the nutritious lymph, makes them become pale and thin, and often throws them into a state of consumption and decay. This fever is often produced by the irritation the heart receives from the too earnest application of the mind, in consequence of which its pulsations become more frequent.

Still more disturbing were the psychological symptoms displayed by another scholar.

Gaspar Barloeus, an orator, poet, and physician, was sensible of these dangers, and often used to warn his friend Hughens of them; but he was notwithstanding regardless of himself, and weakened his brain so much by excessive study, that he thought his body was made of butter: in this persuasion, he carefully avoided coming near the fire; till at last, wearied with continual apprehensions, he threw himself into a well. For these twenty years past I have regretted the loss of a friend, equally eminent in genius as well as character; a man calculated for great undertakings, whose studies were divided between literature and physic, which he certainly would have improved; he was employed day and night in reading, reflecting, and making experiments; he first lost his sleep, then was seized with some transitory fits of lunacy, and at length became quite mad, so that even his life was preserved with difficulty. I have seen other men of learning who have begun by being maniacs, and have at length become compleat idiots.

He continues by citing two further cases which sound like something out of Monty Python.

There are many observations of the same kind extant; and I have been told by a man of veracity, that Peter Jurieu, so famous for his theological disputations, his controversial writings, and his commentary on the Apocalypse, had so far injured his brain, that although his judgment was still preserved in many instances, yet he used to affirm that his frequent colics were caused by the fighting of seven knights shut up in his bowels. Others have imagined themselves to be lanterns; and some have been known to afflict themselves upon the supposition of their having lost their thighs.

What can be done to prevent the writer from falling into such a dreadful fate? Dr Tissot has some very sensible advice:

The relaxation of the mind is the first preservative; without this, all other helps are inefficacious.

After observing that literary persons are apt to be in denial about the state of their health, Tissot recommends that friends and families challenge the scholar and compel them to take exercise. His description is much like the contemporary idea of an intervention, when addicts are openly confronted about the destructive consequences of their addiction.

The only way, therefore, is to be resolute with them, to force them away from their closets, and oblige them to indulge in recreation and rest, which will remove their disorders and restore their health. Besides, the time they pass out of their closets is not thrown away; they return to their labours with fresh eagerness; and a few moments given up every day to leisure will be amply repaid by the enjoyment of health, which will prolong the course of their studies.

one of the most powerful preservatives and restorers of the health of the learned. In the foregoing article the full advantages of open air have been considered: these are greatly enhanced, if accompanied with some degree of motion. From the combination of these two salutary powers, we receive refreshment, circulation is carried on with ease, perspiration encouraged, the action of the nerves reanimated, and the limbs are strengthened. Every man who has been confined to his study for some days, feels his head heavy, his eyes inflamed, his lips and mouth dry; he complains of a certain uneasiness about his breast, a slight tension at the pit of his stomach, is more disposed to melancholy than mirth, his sleep is less refreshing, and his limbs are weighty and benumbed. If he still persists in shutting himself up, all the symptoms increase, and lay the foundation of the mischiefs I have described. A walk for two or three hours in the country dispels them entirely, and brings back serenity, freshness, and strength.

One thought on “The perils of being a writer”