In 1847 a Dr Mervin Coates wrote to The Lancet to tell them a funny story, an unusual case which he came across in his practice on the Isle of Wight: 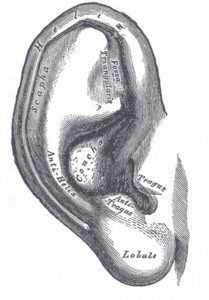 In the summer of 1846, being myself absent from home, a friend was called upon to attend an old, poor man, who had suffered for some days from severe pain over the whole of one side of the face and head, but more intensely still about the ear. He found him feverish, in great pain, and incapable of opening his mouth; the pinna and skin lining the external meatus, were highly inflamed and swollen.

The pinna is an antiquated term for the external ear as a whole.  The meatus is the opening of the ear canal.

There was no getting away from laxatives in 1846. Even for a swollen ear.

Two days afterwards I paid him a visit. He was then in great pain, and, otherwise, much in the same state as I have already described, but, in addition, there was an oozing of pus from the meatus, and almost entire closure of that passage by a whitish substance, which the patient conjectured to be a piece of onion, introduced there by the recommendation of some old woman, but which the probe detected to be bony.

Piece of advice for you: if an old woman with no obvious medical qualifications recommends sticking a piece of onion in your ear, don’t.

The patient declining to have this removed, he was recommended to continue to foment and poultice. That same night a fit of sneezing forced out the piece of bone felt by the probe, which proved to be one of the wisdom teeth of the upper jaw; after that the man got well.

And, er, that’s it. No explanation of how this came about; not even a little wild speculation. Did the patient stick the tooth in his own ear?  Or did it work its way through his jaw and – somehow – into the auditory canal?  The latter seems highly unlikely.  Alas, we’ll never know.

2 thoughts on “The man with a tooth in his ear”