The following remarkable narrative was published in The Medical and Physical Journal in April 1812. The author, Stephen Love Hammick, was in his mid-thirties when he reported this case; he was later made a baronet in acknowledgment for his service as personal physician to the Prince of Wales. He was also one of the original 300 fellows of the Royal College of Surgeons when it received its new royal charter in 1843. Like his father before him, Hammick spent much of his career at the Royal Naval Hospital in Plymouth, and this case came up in his practice there. 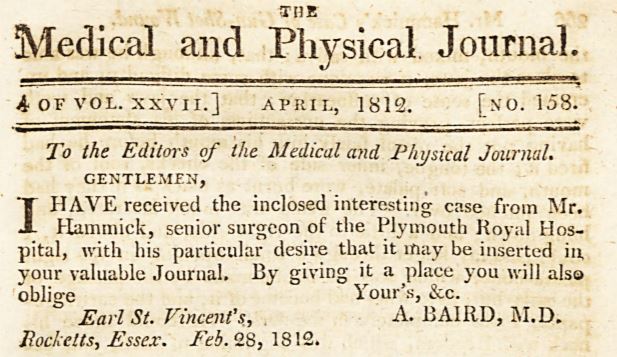 Mr. W. E. of the Royal Navy, aged about 33, of a full plethoric habit, and of a vigorous healthy constitution, first lieutenant of his Majesty’s frigate Leonidas, then lying in Hamoaze, was admitted into the Royal Naval Hospital at Plymouth, under my care, about nine o’clock in the morning of the 9th of October, 1811.

Hamoaze sounds like a place name from continental Europe, perhaps Portugal, but is actually an estuary near Plymouth, part of the river Tamar. By ‘plethoric’, Mr Hammick means that his patient had a florid complexion.

On my first visit, I received from him, and the surgeon who accompanied him on shore, the following particulars: That he had, about two hours before, in a temporary fit of insanity, (having been, quite well late the preceding night,) put far back into his mouth a loaded pistol, and in that situation had fired it off; the shock threw him off his legs, and he fell forwards on his face in his own cabin, where his messmates immediately found him, and prevented his further injuring himself by the removal from his table of a loaded pistol and an unsheathed razor; in a few minutes he was so far recovered from the explosion, as to be able to relate what he had done; in a short time afterwards he was put into a boat and conveyed to the hospital.

Before the Suicide Act of 1961 it was illegal to kill oneself. To escape prosecution, therefore, those who tried and failed to do away with themselves would almost invariably plead temporary insanity as a defence. The unfortunate sailor had obtained powder for his pistol but did not have a suitable ball. Instead he had used one intended for a smaller weapon, which – fortunately – had not been of sufficient size to put an end to his life.

Previous to his admission here he had bled very freely from the mouth, and had been constantly coughing, and spitting up clotted blood, not having the power of swallowing it. On examination, I found that his face and lips were much swollen and greatly discolored, particularly on the right side; that there was a pretty free discharge of blood issuing from the mouth, mixed with saliva; that, although he was able to close the jaws, it was done with some difficulty, and increased the sense of suffocation; that the jaws and teeth were perfect, proving the correctness of his statement of having put the pistol fairly into his mouth before he had fired it; the tongue, inner side of the cheeks, roof of the mouth, and soft palate, were burnt as black as if they had been pitched over.

The surgeon discovered an opening in one of the bones of the hard palate, large enough to admit a finger. There was no sign, however, of the pistol ball.

He could move his neck with freedom, which was beginning to swell, and becoming emphysematous; and he had freely the rotatory motion, as well as the flexion and extension of the head.

The description of his neck as ‘emphysematous’ indicates that air had passed through the wound and into the tissues.

His cough was very distressing, from the lacerated state of the throat and pharynx, and from the coagulated blood getting down without his having the power of swallowing; his voice was weak and low, and it was a fatigue to speak; the pulse was feeble, and he felt cold, caused not only from exposure in the boat on coming on shore, but also from the sense of chilliness and horror which almost invariably seizes persons immediately on the infliction of any wound by firearms, even in those of the most undaunted courage; he was perfectly sensible, thoroughly convinced of the impropriety of the act he had committed, was very anxious to live, but from his feelings was confident he should not survive the wound.

The surgeon attempted to administer senna, a laxative, but swallowing was so agonising for the patient that he soon abandoned the idea.

A cooling wash was ordered to the outside of his neck and face, and he was desired to gargle the mouth and throat very frequently, which he was able to do, although he had not the power of forcing a single drop down the oesophagus.

In the evening Mr Hammick found that the patient had passed a ‘miserable day’, and

could not permit himself for a moment to recline in bed, was incessantly coughing, his face and neck were much swelled and discolored, the latter being very emphysematous, the lacerated state of the pharynx permitting the free escape of air into the cellular membrane and interstices of the muscles of the neck.

This condition is still known today as surgical emphysema.

Fever now coming on, with fullness of the pulse, twenty ounces of blood were taken from the arm, a purgative clyster was thrown up, and he continued to gargle, either with lemonade, which was grateful, or the common detergent gargle.

A ‘purgative clyster’ was a laxative enema. The following day the surgeon found the patient was, if anything worse.

About three o’clock in the afternoon, during a violent fit of coughing, in which he thought he should have been suffocated, he threw up the ball, with some slough and cartridge-paper; from which, however, he did not experience so much relief as we might have expected.

A remarkable turn of events.

The ball, which I now have, is a small pistol-ball, having on one side a flat mark as if made by its passage through the palate-bone, after which I suppose it fell, together with the paper, and was prevented passing down the oesophagus by the lacerated state of the pharynx; for, had the ball found its way into the stomach, it would have been discharged by the anus, instead of being thrown up by the mouth.

That evening there was still no sign of improvement:

On the contrary, he said his head was splitting, and his thirst insupportable, with a pungent heat of the skin. I therefore directed the nurse to throw up a pint of cold and weak lemonade as a clyster, which, in about half an hour, relieved his thirst, and cooled his body so much that he begged to have it repeated; and it was ordered he should have it as often as he liked during the night.

This is the only example I have encountered of a doctor administering lemonade via the rectum. And I’m not mocking the idea: it seems to have done the trick.

The following morning the patient was much better, though the injuries to his throat, which were severe, still made it impossible to swallow. So the surgeon resorted to an extreme measure.

In the evening, after some efforts, I succeeded in getting a tube well down the oesophagus, and threw into the stomach about a pint of tea, which was particularly pleasant, and soon took off the pain and sinking, as he described it, of the epigastric region; but he still requested to have the cold lemonade clysters, as he said we could not form any conception how grateful they felt, and how they always relieved his thirst and cooled his body.

The patient’s appreciation of his lemonade enemas is a recurring feature of the remainder of the case report. It is long and detailed, so I have abbreviated it.

12th. Had passed a night of great suffering, for the lacerated and sloughing state of the throat and mouth left him not a moment free from cough, and the fits of coughing were the most distressing I ever witnessed, and more than once thought he would have expired. This morning the appearance of his neck and throat were really frightful from the extent of the swelling and discoloration. By means of the tube I got at one time some milk, and a few hours afterwards some lemonade, into the stomach, and we went on with our gargles and cold clysters.

The following morning he was finally showing signs of improvement. And by the 19th, ten days after the injury,

his power of swallowing increased so rapidly, that by the 22nd we were enabled to lay aside giving either nourishment or drinks by the tube, for up to this period I had constantly passed it twice or three times a day, as he felt inclined to receive nourishment.

Thereafter there were a couple of setbacks, but he was finally on the road to recovery.

After this his progress was most rapid, so that by the 13th of December he was discharged the hospital quite cured and well. The only difficulty he experienced was a degree of mucus spitting, or cough.

His jaw remained a little stiff, and swallowing food was occasionally difficult, but on the whole he was in good health.

Excepting in these particulars, which in a few weeks will be most probably overcome, he felt perfectly well, and free from all inconvenience from the wound.

An impressive example of the body’s capacity for healing itself with only minimal intervention. The most important thing was to keep the patient alive and give him nutrition; Mr Hammick deserves credit for his imaginative approach to a tricky problem.

4 thoughts on “The lemonade enema”