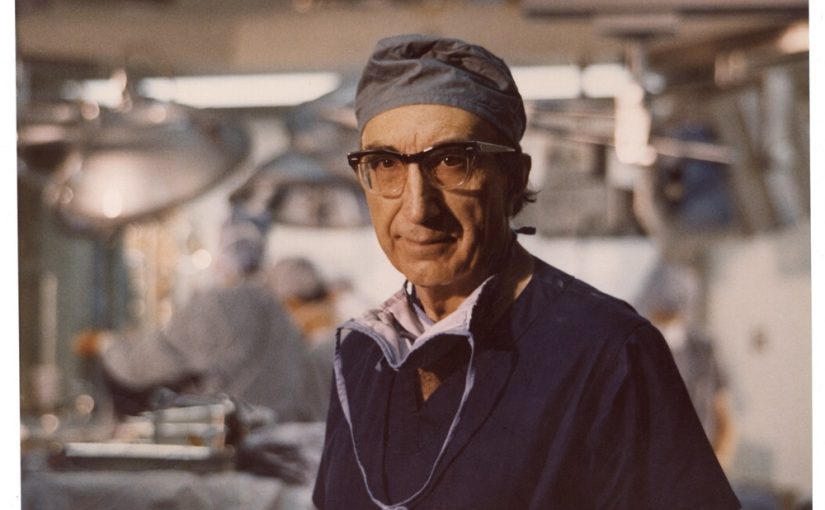 The American Michael DeBakey was one of the giants of twentieth-century surgery. His extraordinary career spanned eight decades, beginning in the 1930s and ending only with his death at the age of 99 in 2008. He is best known today as a pioneering cardiac surgeon, but in the early 1950s he and his then colleague Denton Cooley also revolutionised the treatment of aortic aneurysms. DeBakey was one of the first American surgeons to perform heart transplants, but perhaps his greatest contribution was in the development of mechanical circulatory support – miniature pumps, known today as ventricular assist devices or VADs, designed to give assistance to a failing heart.

DeBakey is something of a personal hero of mine; in fact it was a BBC documentary about him, filmed when the surgeon was in his late eighties but still very much active in the operating theatre, that first got me interested in the history of cardiac surgery. I feature his work frequently, and with great admiration, in my book about the history of cardiac surgery, The Matter of the Heart. So I was shocked to discover that DeBakey at the very least witnessed, and possibly even performed, forced sterilisations at the behest of the Nazi regime.

This may sound an extraordinary claim. But the evidence behind it is solid, and comes from the surgeon himself.

In 1972 the journalist Donald A. Schanche recorded many hours of interviews with Michael DeBakey as research for a biography he was intending to write. Schanche never completed this project, but the transcripts of the tape have survived, and were donated to the US National Library of Medicine. They are all available online, but seem to be little known. I have read them all, but for me the most surprising revelation comes in Tape 4, in which DeBakey talks about his early life.

In 1935 Michael DeBakey travelled to Europe to complete his training with leading surgeons in France and Germany. After a year working for Rene Leriche in Strasbourg, he moved to Heidelberg to study with Martin Kirschner. He arrived there shortly after Hitler won a landslide in the infamous ‘election’ of 1936 – in reality, a yes/no referendum in which ‘yes’ was the only acceptable answer. This was a Germany in the grip of full-blooded Nazism, a country that had recently enacted the Nuremberg Laws which made Jews officially second-class citizens, beginning a process that would end in the atrocities of the Holocaust.

Michael DeBakey was 28 when he arrived in Heidelberg. But he appears to have been ignorant of the political situation, or at least not to have been interested in it. In his interview with Donald Schanche he talks about a friend named Ernst (we never learn his surname), a fellow surgeon:

There was one fellow by the name of Ernst who had a car. He was a cut above most of them obviously, financially – obviously a well-to-do family. He was the only one that had an automobile. And he and I became very good friends and he took a liking to me. And I took a liking to him and we got along beautifully. And every Friday night, we’d go off together. He’d invite me to go with him to Mannheim to a meeting of the Nazi group that he belonged to. I don’t know whether it was an SS group, now, or what it was. But I’ve got pictures of myself with this group sitting around… in a beer hall… around a big round table drinking beer together. Well, the meetings occurred every Friday night. So he invited me to join him in driving over to Mannheim, which is not far, but a much bigger city than, of course, Heidelberg, and I guess the headquarters for this Nazi group, I don’t know. He was an officer of this group. And he’d go to the meeting, you see, and I’d sit in the beer hall waiting for them to come back. And then they’d come and we’d have beer and sausage and things like that, you see. And then drive back to… late at night… back to Heidelberg.

Some may find this admission surprising or even damning. By 1936 there was not much doubt what sort of regime Adolf Hitler was leading. Germany had been transformed into a one-party state. Jews and Roma were openly persecuted. The country’s armed forces had occupied the Rhineland, in breach of the Versailles Treaty.

Was it really wise for DeBakey not only to socialise with a self-identifying Nazi, but to attend his political meetings? Many men of his age, visitors to Germany, would have been horrified by the idea of spending time with politically active Nazis. I think it is, however, possible to defend his conduct if we accept his assertion elsewhere that he was politically naïve and ignorant of what was going on.

But that is not the worst of it. A little later in the conversation, when talking about his work in the operating theatre in Heidelberg, he says the following:

The only thing… There was one experience that I had that kind of went against my grain and I didn’t like. I noticed that we did a lot of sterilisation operations… And one day I said to… And I assisted in these… you see, and worked, I did some of them.

Note those words: I did some of them.

It was very then… for the males it was a vasectomy. That’s very simple. So I said something one day to, I think it was Ernst or one of the other men, I said, ‘You know, why are some of these people wanting to be sterilised?’

And I said, ‘What do you mean, ordered?’

‘Well, there’s a tribunal of three judges that are appointed that decide whether or not they are to be sterilised.’

He said, ‘Well, there’s various bases.’ He said, ‘There’s certain… That there…These three judges find that they fall into certain categories, they’re sterilised. One is insanity. They’re declared insane and after we put them in an insane asylum why they’re sterilised. Another is if there is some…something in their background to indicate genetically that they have a high chance of giving birth to some who are deformed, or have other, for example, abnormalities or insanity in the family and that sort of thing. They have to be sterilised.’ And one of them also was that if, I think, if they particularly of Jewish extraction having certain other things. I’ve forgotten now. But, I found this kind of repulsive. And I didn’t get into it too far, but it seemed to me cruel to make this decision. Because I saw some of these people and they didn’t look like they were insane to me. I could talk to them.

To clarify: DeBakey states unambiguously that forced sterilisations took place in the Heidelberg clinic where he worked in 1936-7. He claims that these sterilisations were performed on those who were insane, congenitally ill, or Jewish. In his first answer he states that ‘I assisted in these… you see, and worked, I did some of them.’

He subsequently tried to backpedal on this statement. Schanche asks whether he ever refused to participate in the operations. DeBakey replies:

Well, you see, I didn’t… I was not really a participant in a true sense of the word. I was participating in the technical aspect of it. Assisting and so on to learn something about it and that’s the way we did it. But I didn’t have to participate and it wasn’t assigned to me. I had more responsibility…

Schanche: You were more of an observer than a… an active participant.

DeBakey: Yeah. That’s right. Yeah. And after that I was not very keen about even observing this anymore. I didn’t like it. I put my time elsewhere. And I’d seen enough of it anyway, you know, from a technical standpoint.

It is clear to me that Schanche threw DeBakey a lifeline, an opportunity to back down from his initial position, which he gratefully accepted. But if his first answer is to be believed, he assisted in – and even performed – some of these procedures himself.

I find it surprising that this incident from DeBakey’s early life is not better known. It is, at the very least, startling that one of American medicine’s most celebrated figures seems to have been caught up – albeit unwittingly – in the eugenics policies of the Third Reich. The regime forced hundreds, if not thousands, of German doctors to break the Hippocratic Oath – performing unnecessary and distressing operations on patients who had not given their consent.  It appears that DeBakey was one of those doctors.

[NB all interview excerpts are here reproduced unedited, exactly as they appear in the original. Ellipsis (…) indicates a pause or hesitation rather than omission.]

UPDATE: There has been a fair bit of interest in this article since I published it a couple of hours ago. If you would like to see the original transcript for yourself you can read it at the NLM website here. The relevant section begins at page 22.

One thought on “The heart surgeon and the Nazis”