In 1799, as the French Revolution entered its final phase and Napoleon prepared to seize power, European medics engaged in a pertinent debate.  The Medical and Physical Journal reports:

Among other singular questions lately agitated in France and Germany, the following is not the least curious: Whether the separated head of a person suffering on the scaffold be still, for a certain time, conscious of its sufferings?

With as many as 40,000 guillotined during the revolution, opportunities for definitive research were certainly plentiful, if risky.

This question was proposed at the time when the guillotine was first adopted as the instrument of public execution in France; and the writings which appeared on this apparently whimsical subject, were numerous.  Prof. Soemmering maintained in a particular treatise, first printed in the Moniteur, that the consciousness of the sufferer still continued for some time; and the Professor is so far persuaded of the truth of this assertion, that, in his opinion, the severed head would still emit sounds, if it were not separated from the organs of speech, as well as those of respiration.

Prof. Wedekind controverted this opinion, and defended the French method of beheading as the quickest and least painful species of death, by which all consciousness is at once intercepted and annihilated: he says, that the blood-vessels of the separated head are ipso facto instantly and completely emptied of the blood, and that the organ of the mind is thus rendered totally inactive; consequently the head cannot be conscious, either of its former or present state.

The rationale behind the introduction of the guillotine was in fact that it was a painless method of execution.  The man who gave the instrument its name, Joseph-Ignace Guillotin, is quoted as saying to the French Assembly, “Now, with my machine, I cut off your head in the twinkling of an eye, and you never feel it!”  Although responsible for its introduction, Guillotin was not the inventor of the device, and – contrary to urban myth – was not one of its victims.  He was, however, a prominent physician who was one of the first in France to advocate vaccination.

Mr. Clossius, of Tubingen, though not fully convinced that the head, in a dissevered state retains consciousness, yet considers this fact as highly probable, and on the whole, agrees in opinion with Soemmering. He dwells at considerable length, in his treatise “On Decapitation” upon the objections started by Wedekind, and endeavours to prove that the blood-vessels of the head are by no means so quickly and completely emptied, as the Professor is disposed to think; and that even without an actual circulation of the blood, there may still remain some activity and energy in the brain.

Another German writer on this subject, C.A. Eschenmayer, combats the opinion of Soemmering, but deals so much in confused philosophic speculations and vague hypotheses, that we shall forbear taking notice of what he advances.

Ooh, cutting.  So to speak.  The author continues by summarising the argument of an anonymous French pamphlet opposing the guillotine:

Citizen Sue, not contented with asserting, that the head still continues to live, and to feel the most excrutiating pain, as long as the blood remains warm in the smallest vessels, maintains that the lower part of the body also must suffer, after the head has been struck off. His arguments are not a little curious. He compares the act of beheading with that of amputation of a limb; as it has been observed that persons have felt, or at least imagined that they felt pain in a limb, after being separated from the body by a chirurgical operation, as also after a dislocation of the vertebrae; that the upper parts of the body remain sensible and alive, while the lower extremities are lifeless and insensible to pain. The incongruity of this mode of reasoning from analogy is so palpable that it requires no refutation.

The remarkable facts witnessed by the author, during a number of executions at Paris, and related in this treatise; for instance, the singular phenomenon of smiling, or rather of blushing, in the trunkless head of Madame Cordet, the assassin of Marat, are no doubt curious, but not conclusive.

Witnesses at the execution of Anne Boleyn are said to have seen her lips and eyes move when the executioner held up her severed head for all to see.

The subject of dispute is indeed such as admits of no positive decision; for the feelings of a person, after the mortal blow has been given by the sword or guillotine, cannot be ascertained, and we may pronounce it impossible for for human reason to form an adequate conception of their greater or less duration. If there exist a something within the body, which after its dissolution hastens towards another destination, in which we shall not be insensible to agreeable or disagreeable sensations, this something will no doubt also possess the consciousness of its situation, whether the body has been destroyed by a putrid fever, by poison, by a concussion of the brain, or by any other mode of depriving or taking away life.

A conclusion which owes more to philosophy and theology than to medicine, of course.

Postscript: this question continued to fascinate medics for well over a century.  In 1905 a doctor from the Hotel-Dieu in Paris, Dr Beaureiux, was allowed to attend the execution (still by guillotine, which remained the French executioner’s method of choice until the 1970s) of a murderer called Languille.  He carefully positioned himself next to the receptacle into which the freshly-decapitated head fell so that he could see exactly what happened to it after it had been severed.  For a few seconds the facial muscles went into spasm, and then:

The face relaxed, the eyelids half-closed, leaving only the conjunctiva visible, just as we see when people die in our daily practice.  I then called out in a loud, sharp tone: “Languille!”  Then I saw the eyelids slowly lift without any spasmodic contractions – I make a point of this peculiarity – but with a smooth movement, clear and natural, as happens during life when people awake suddenly or are torn from their thoughts. Then the eyes of Languille settled on mine and the pupils accommodated themselves. This was no vague and dull look… these were decidedly living eyes looking at me. After several seconds, the eyelids closed again, slowly and without jerking, and the head made the same appearance to me as before I had called out to it.

For what it’s worth, this is consistent with modern opinion on the subject: neuroscientists now believe that it is possible for severed heads to experience a short period of consciousness – perhaps as much as 15 seconds – before death. 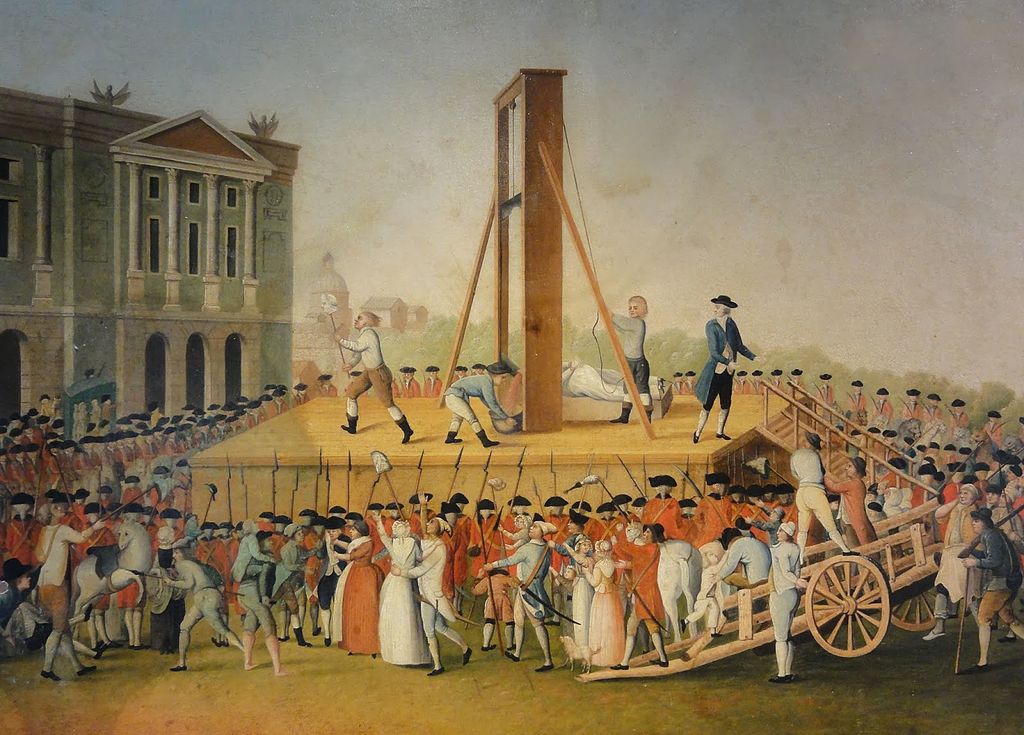 One thought on “The guillotine – life after death?”