A short story, this one, but it packs quite a punch. In 1855 the Western Lancet published a letter from an anonymous army officer serving in the Crimea:

A curious thing occurred yesterday. A sapper was brought from the trenches with his jaw broken, and the doctor told me there was a piece of it sticking out an inch and a half from his face. The man said it was done by a round shot, which the doctor disbelieved, but the poor fellow insisted, and said: “Yes, and it took off the head of the man next to me.” 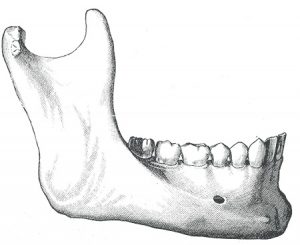 This was conclusive, and the surgeon proceeded to remove the bone; it came out easy, when the doctor said to the man, whose face appeared to preserve its form pretty well, “Can you move your jaw?”

The doctor then put his finger into the man’s mouth, and found the teeth were there, and at length assured the soldier that it was no jaw of his that was broken, but that of his headless comrade, indicting a severe but not dangerous wound.

The more I think about this, the more I wince.  Imagine being told that the bone sticking out of your face belongs to the man you just saw decapitated by a cannonball.

Upon this the man’s visage, which had been rather lengthened, rounded up most beautifully.

2 thoughts on “The extra jaw”