Here’s a wince-inducing case published in the Dublin Medical Press in 1853, and contributed by a Dr Jameson:

Peter Nowlan, aged 30, a powerfully able and muscular man, a corn porter, was admitted into Mercer’s Hospital on the 3rd of November, at half past twelve at night. His wife informed me that he came home that evening at ten o’clock in a most intoxicated condition, and while staggering about his room, struck his right eye against a small iron hook or nail that was in a dresser, which entered at the outer angle of the upper eyelid of that side, and when she went to his assistance discovered his eye protruded from its socket.

She was most anxious to remove him at once to hospital, but could not succeed in prevailing on him to go until half past twelve at night, when in a few minutes after this I saw him. He was very boisterous and unruly, had a large check apron held close up to his eye, which he kept constantly rubbing and pressing against it. On its being removed, he presented a most peculiar, and I might add, frightful appearance.

I doubt many readers were thinking it would be nice to look at.

There was the right eye protruded out of the orbit, firmly fixed and immoveable, staring, elastic to the touch, and devoid of all power of vision. The cornea was dry, cloudy, and rather opaque, pupil moderately contracted, and uninfluenced by the light of a candle.

These are bad signs. Unlike most tissues, the cornea has no direct blood supply but absorbs its oxygen from the tears. Deprived of this natural lubrication it quickly dries out and dies. The fixed pupil also indicates that the organ’s connection to the central nervous system had been interrupted; this might be because the optic nerve had been severed. 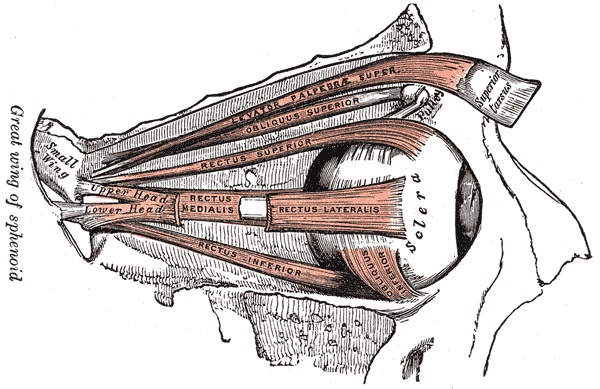 With difficulty I could get him restrained, as he was such a powerful man, but having accomplished it, I then, with two fingers of my left hand, elevated the upper lid, at the same time, with the finger and thumb of my right, pressed the ball of the eye, and immediately it was drawn back with a distinct snap, and the lids closed over its anterior surface.

I now, for the first time, observed the small wound before alluded to at the outer angle of the upper lid, but could not ascertain or form any conjecture at the time what amount of injury he might otherwise have sustained. I therefore had him conveyed to bed, and ordered cold to be assiduously applied to the part for the remainder of the night.

The following morning the doctor found his patient sober but with little memory of the previous night’s events. But, remarkably, the eye seemed to be getting better.

He could distinguish the daylight; complained of pain in the head, and a deep pain in the globe of the eye, with full pulse.

Dr Jameson ordered bleeding, laxatives and a cold compress to be applied to the eye. Two days later, things were much improved:

6th. All pain gone; conjunctival vascularity less; sensation as if gravel were beneath the lids gone; vision nearly restored; has complete power over all the motions of the eye.

Three days later the patient was discharged, entirely cured. When he presented this case to the Surgical Society of Ireland, Dr Jameson’s colleagues noted its exceptional nature: the muscles of the eye, and the optic nerve, had somehow escaped damage even though the globe had been entirely dislodged from its orbit. They were perplexed as to how the man had escaped permanent impairment – though one suggestion was that he had an unusually large eye and an unusually shallow eye-socket. What is certain is that he had a very lucky escape.

One thought on “The dislocated eyeball”