At least twice a year one or other of the newspapers prints a story about one of those mysterious apparitions in which the likeness of Jesus is burnt on to a piece of toast, or can be seen (if you squint) in the seeds of a watermelon.  In 1828 the London Medical Gazette reported a strange Napoleonic equivalent – thirteen years after the final defeat of Bonaparte, and seven after his death.  A Paris correspondent writes:

A child, four years old, is now in Paris, with the words ‘Empereur Napoleon’ on the right eye, and ‘Napoleon Empereur’ on the left, in white letters on a blue ground. Magendie, Cuvier, and about forty sçavants, [savants] have seen it, and will testify the truth.  The child will probably go to England, where, no doubt, he will make a fortune.”

Ten days later the same correspondent had an update. 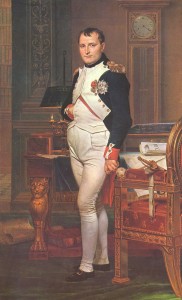 “The child with the letters on its eyes is still in Paris, and there appears to be no doubt that the effect is natural, and not, as you suppose, by the operation of tattooing, or puncture.  The mother accounts for it in this way: she was a violent Bonapartiste, and her brother, who was one of Bonaparte’s guards, gave her, at parting with her, when going to the army (where he was killed), a new 20 sous piece of the Emperor’s; this she religiously kept, but being poor, was obliged to part with it to pay the contribution, which affected her so much, that she cried bitterly for three or four days.  At this time she was in the family way.”

I had no idea that this euphemism was in use as early as 1828.  By the time the Gazette reported the story, the child had indeed been sent to London, and one of its staff was dispatched to inspect him at first hand.  This was his report:

There are various instances on record in which individuals have been said to have words (generally a name) marked upon the iris.  For the most part these individuals have had light-coloured irides, marked with lines of various figure, and generally of darker colour; and, with the help of a little imagination, something like letters may occasionally be discovered.  In the present case, the iris is of a light blue or grey colour, and is traversed by lines of a lighter colour, or nearly white.

So will the child make a fortune?  The Gazette’s man on the ground is not convinced.

Among the irregular figures thus formed, a willing spectator may read Napoleon Empereur – or anything else.

One thought on “The child with Bonaparte in his eyes”