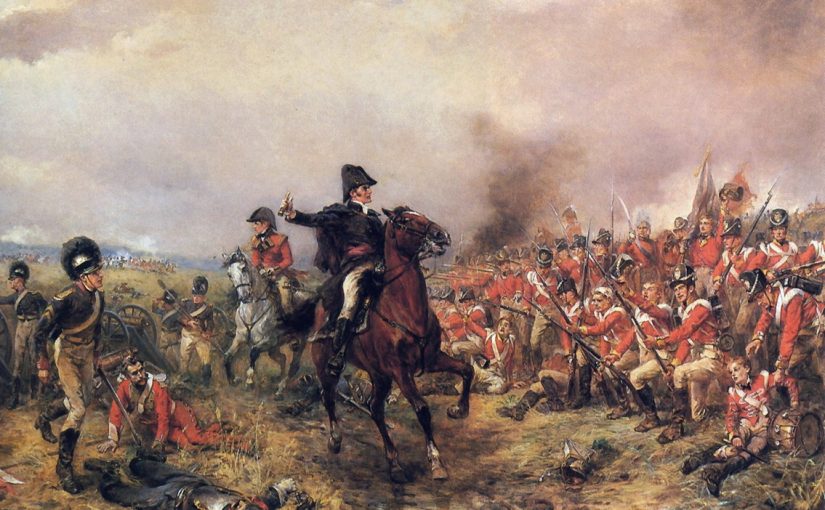 On the eve of the Battle of Waterloo the Duke of Wellington was making a final inspection of his troops when he spotted one of the medical officers smoking a cigar. The Duke confronted him.

“Well! Hennen, is that the fortieth cigar today?”

“No, my lord,” replied the surgeon, “it is only the thirty-eighth.”

The chain-smoking surgeon was John Hennen, known for having a cigar permanently clamped between his teeth – even while he operated. There probably weren’t many British officers who could get away with such behaviour, but Hennen was admired by Wellington as a courageous soldier and one of the best field surgeons in the entire army.

Born in Ireland, Hennen had enlisted in 1800 at the age of 21, and served in the Peninsular Wars, taking part in engagements all over the Mediterranean.  In 1818 he published his first book, Observations on Some Important Points in the Practice of Military Surgery, and in the Arrangement and Police of Hospitals. The second edition, which appeared two years later, was given the rather more economical title Principles of Military Surgery. Although Hennen is less well known today than his contemporary George Guthrie, his treatise was highly regarded and ran to several editions.

Drawing heavily on his experience on the front line, Hennen describes a wide range of injuries sustained on the battlefield and their treatment. He has a lively style, and many of the cases are pretty astonishing. In a chapter devoted to abdominal injuries I came across this gem.

The following case appears to me very valuable. It is perhaps among the most singular on record, and it illustrates the whole series of symptoms attendant on injuries of these parts.

By ‘these parts’ Hennen means the kidneys.

It is told principally in the plain and unadorned language of a soldier, who relates what he felt, without any fixed ideas of the nature or functions of the organs the lesion of which he describes.

The soldier (who is not named) must have been a member of Wellington’s army at the Battle of the Nive, which took place in Bayonne in southern France.

“On the 9th December 1813,” says this brave man, “ I received a dangerous wound from a musket-ball through the body, which entered the right side. The surgeon of the regiment being nearly on the spot at the time I was wounded, had me moved in a blanket to the nearest house, where he instantly examined me, and was about to extract the ball; but, from the extreme agony in which I was, and from my immediate death being apprehended, he desisted from the operation, and in one return I was actually stated as dead.

But the soldier didn’t die. The surgeon was able to locate and extract the musket ball, which had entered through the man’s side and ended up lodged next to the lowest two vertebrae of his spine, adjacent to the pelvis. Having done so, he ordered some tea and asked for the patient to be moved nearer the fire.

On this movement I expressed a desire to pass urine, which flowed very copiously, and was a second cause of alarm, as it had more the appearance of blood than otherwise. This symptom put an end to all hopes of recovery on my part.

With good reason. When urine starts to look like unadulterated blood there is likely to be a pretty considerable haemorrhage – possibly evidence of injury to a major blood vessel.

On account of the whole army retreating this evening, I was unavoidably moved to the rear, nearly a distance of three leagues, the pain induced by which exceeded description. In less than an hour, while in the waggon, I again passed a quantity of blood, far more visible than before, as it deeply stained everything that it touched.

After this excruciating journey in a bumpy horse-drawn vehicle the soldier arrived at a makeshift hospital, where a surgeon bled him and administered an enema. This may, however, have been a bad idea:

I now began, in addition to the pain in my wound, to feel considerable pain from inflammation in the bowels. I soon became delirious, and cannot describe how I was affected for a considerable time; but I understand I was several times bled to keep back the inflammation. I recollect that, on my reason returning, I sent for a surgeon to examine my right shoulder, as I could not be persuaded, from the pain I felt, but that I was wounded there also. This was not the case.

For the next fortnight the only nourishment he could manage was tiny sips of tea. He was in a pitiable condition.

I thought I should never recover the use of my arm, and I could not stretch out my legs, particularly the right one. I also suffered great pain between the wounds, and do so to this day, and I must be very cautious in raising my body suddenly. In about seven weeks I was removed farther to the rear and sent to England.”

You might be wondering why so little was being offered in the way of treatment. The orthodoxy at this date was to interfere as little as possible with abdominal wounds. Elsewhere in the book Hennen writes:

Nature makes wonderful exertions to relieve every injury inflicted upon her, and they are often surprisingly successful, if not injudiciously interfered with.

In 1813, before anaesthetics and antiseptic measures, this was entirely sensible.

After his evacuation (which must again have been agonising) the man spent some time recuperating in London before he was sent to his regimental depot. In consequence of the journey fever was excited, which proceeded to a considerable length, and peritoneal inflammation again attacked him. On the second day after this attack, a tumour formed in the site of the posterior wound, which in about a fortnight was punctured, and discharged nearly six ounces of purulent matter, of an urinous smell.

He had evidently contracted an infection. The smell was clear evidence that some part of the urinary system was involved. The wound continued to ooze pus for several months – he was in great pain, had lost a lot of weight, and struggled to pass urine. And then at the end of July there was a dramatic development. The patient describes it:

The passage of the urine became every day more difficult, and I found that the extreme pain I felt moved first from my side to my belly, and gradually on to the testicles, and latterly to the penis. The flowing of the matter continued great, and very much savoured of urine….

By which he means that the pus smelled of urine.

…my skin was at times exceedingly fair, and at others completely yellow; and my eyes glistening, and the white at all times discoloured.

This sounds like a description of jaundice, commonly interpreted as a symptom of liver disease. But the man’s yellow complexion probably had another cause: uraemia, a consequence of kidney failure. When the kidneys are no longer working properly, waste products quickly accumulate in the blood. One is urochrome, the chemical which normally gives urine its yellow colour.  And there were obvious signs that this patient was having major problems with his urinary system.

I at last became so exceedingly uneasy from the frequent attempts to pass urine, (which every day diminished in quantity so greatly that I could not at length evacuate more than by drops), that I was reduced to a state of frenzy, when, about twelve hours before the following extraordinary event took place, the discharge from my wounds, which had been lessening for two days before, suddenly stopped; the pain and the pressure of urine became so great, that I could no longer exist; all my efforts were vain,— nothing but drops would pass.

The patient was obviously in a desperate state, so the surgeon was summoned. And then it happened:

I remained in the greatest torture for more than three minutes, when a burst of urine took place, and with it a lump, which struck forcibly against the chamber-pot; the most uncommon quantity of urine followed, coloured with blood; and in less than an hour another discharge, having less colour of blood than the former.

Never mind the colour of the urine – what the hell was the ‘lump’?

On the arrival of the surgeon the chamber-pot was examined, when a lump in the shape of a short thick shrimp, was taken out, which was that night thought a stone, being covered with black grit, and very hard.

Naturally enough, the doctors assumed this was a bladder stone, a natural concretion of minerals formed inside the bladder. But this was something altogether more interesting.

It was placed in a glass, and in the morning all the surgeons examined it, by which time it became dry, and, on being pressed, it clearly appeared to be cloth, which had been driven in by the force of the ball.

The ‘lump’ was in fact a portion of the soldier’s heavy tunic (the famous British army ‘redcoat’).  But where had it come from?

I believe, that the great pain I felt in the side, and, as it made its approaches, was solely occasioned by its movements; and also, that it remained some time near the bottom of the testicles and penis. I do not hesitate to say, that it has injured the parts of the passage, from symptoms I now feel.”

It beggars belief that he was able to pass a hardened lump of cloth the size of a shrimp through the end of his penis. So on the whole it’s not terribly surprising that it caused some damage en route. Mr Hennen completes the tale:

This officer is now in good health. He keeps the cloth as a relic. It is three quarters of an inch long, and tapering to a point like a piece of the end of a bougie.

A bougie (pronounced ‘boo-zhee’) is a long, thin surgical instrument with a variety of uses, designed to be inserted into one of the passages of the body.

Two projecting shreds, like antennae, now gone, but which originally belonged to it, gave it the appearance of the shrimp which he describes.

What on earth had happened? John Hennen was in no doubt that the plug of cloth had travelled from the wound in the man’s side, across the body, through the ureter into the bladder, and from there via the urethra back into the outside world – he adds that

the dilatability of the ureter, and urethra, is sufficiently great to admit of the passage of much larger substances, formed within the body, or casually introduced.

It seems an incredible tale, and John Hennen evidently realised that some readers might have difficulty believing it: he adds that no fewer than ten surgeons and physicians had witnessed the case and could confirm that the story was true.

2 thoughts on “The bladder shrimp”